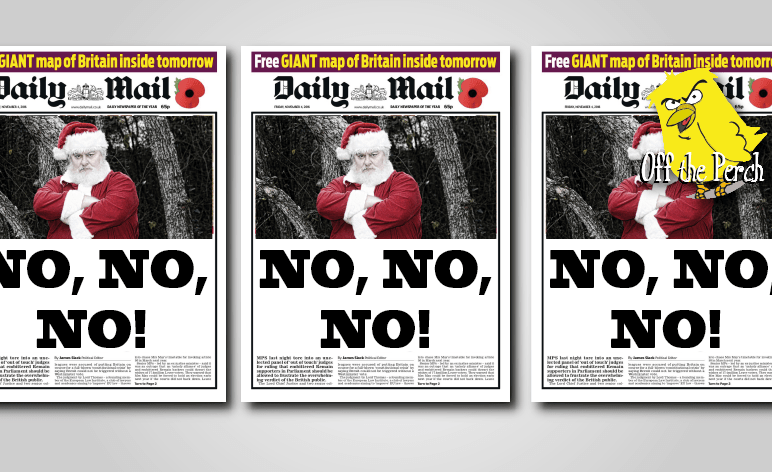 If there’s one thing The Daily Mail is good at, it’s dehumanising other human beings. Whether it’s making refugees look like vermin or poor people seem like devious scammers, there really is no end to who it’ll hate.

But this year, The Mail felt like a bit of a challenge. Which is why it’s turned its hateful eye on the UK’s most popular foreign interloper – Father Christmas.

Just who is this Father Christmas? I’ll tell you who he isn’t, and that’s British.

This may shock you, but Father Christmas is actually from ABROAD. And besides that, he isn’t even really called ‘Father Christmas’. He’s actually SANTA CLAUS and has been posing as FATHER CHRISTMAS to dupe unsuspecting Brits into thinking he isn’t in fact a devious, foreign kraut.

Realising this makes you ask a few questions. Like what’s under that beard? I don’t know about you, but if I had nothing to hide, I wouldn’t cover half my head with facial hair!

There’s also the question of why he’s giving out free toys to children? Is he grooming them, or is it part of some liberal, European ploy to turn our children against us? Because after all, what is giving out free gifts if not the dreaded SOCIALISM!?

It is time to take action anyway! So please, brick up your chimney this year! And be ready for invasion!

Getting in the spirit

Nigel Farage has taken up The Mail’s challenge, and has vowed to spend Christmas Eve on his roof with a pistol. Father Christmas said this won’t be a problem, as Farage was on the naughty list anyway. Primarily for being, in Santa’s own words: