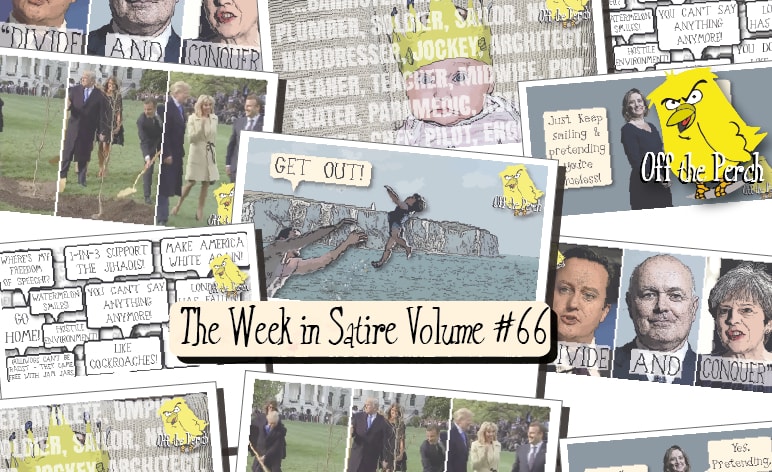 But who else didn’t resign?

The people who measure these things have announced the day-old royal baby is already more successful than anyone else in the country.

And it just goes to show: if you put the work in, results will follow.

Prime minister Theresa May is a big fan of meritocracies. She even wrote a speech about them called ‘Britain, the great meritocracy’. That’s how she became PM, in fact. All that merit she oozes.

As such, it was fitting when she said:

What could symbolise meritocracy more than a tiny baby being rewarded with countless riches, half of Scotland, and a throne that’s cast from the swords of his enemies? After all, he’s already achieved so much.

The baby displayed this by vomiting slightly and crying.

“Lovely jubbly,” the PM agreed, as she stuffed a million-pound note into his top hat.

The birth has coincided with the launch of a new self-help book titled:

Get Born Rich: The Guaranteed Path to Success

Off The Perch caught up with the book’s author to ask if this was practical advice.

“It certainly worked for Prince Charles, Paris Hilton, and Charlie Sheen,” he said. “And if those deadbeats can manage it, I don’t see why everyone else can’t.”

Other people have suggested that a system in which people inherit wealth like Norse demi-gods inherit elemental powers is just wrong. And I’m one of them. Why is the world like this? These people need to get jobs. 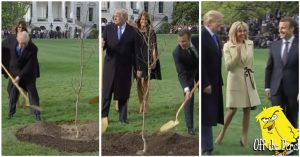 Trump and Macron murder tree with alleged links to Assad

Commentators were confused on 25 April, as Donald Trump and Emmanuel Macron savagely beat a young tree to death. Said reporters quickly changed their tune, however, when it was revealed the sapling may not have been so innocent. Because this tree, according to the self-styled ‘stable genius’ himself, was actually:

A REALY BAD TREE! Links to Assad, Clinton, Arnold Sjhghjsgawarzenneger, Rosie O’ Donnell – the list goes on! HAD TO BE STOPPED! I did the world a favor, but of course the FAKE NEWS media say otherwise!

In reality though, this is one issue in which Trump has the liberal media’s full support.

THERE WILL BE SAP!

When the media realised the tree had allegedly broken international law, they were quick to publish headlines like:

When Trump pulverised that clearly evil shrub to death with his patriotic fists, he finally became the president we deserve.

Trump is an illiterate orangutan whose brain has been warped by its close proximity to hair bleach and evil.

Don’t trust him! Never trust a word he says! DO NOT TRUST HIM!!!!

This American thirst for blood spread around the world.

Well – it spread to Britain, anyway. The only other country that still thinks ‘revenge’ is an effective diplomatic tool.

He told one caller to his show:

Fuck the evidence! That tree had chemically infused wasps in it, and anyone who says otherwise is a pissy-pants terror-lover!

O’Brien then ripped his shirt off, shouted “OI! OI! OI!”, and headbutted a nearby vending machine he suspected of having Russian sympathies.

Having cooled down from their original mania, news outlets are now reporting that the tree-savaging was a:

Which translates as meaning:

There were no real benefits, but at least it didn’t start World War Three. 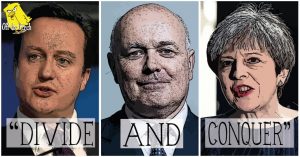 REVEALED! Government had targets to drag society back to the 1890s

Amber Rudd said the Home Office didn’t have targets for deporting people; records showed that they did. This is bad news for Rudd and Theresa May, as it means they need a new excuse for not resigning.

But these were not the only targets this government had. They were merely part of a much larger plan to drag society back to the 1890s.

When David Cameron was still prime minister, he famously said:

For too long, we have been a passively tolerant society, saying to our citizens ‘as long as you obey the law, we will leave you alone’.

In a lesser-known speech at a brandy lodge, he expanded on this:

For too long, these oiks have been taking the piss! Thinking as long as they’re provably human, we aren’t going to fuck with them!

But unless someone is a multi-millionaire backer of the Tory party, they best watch out, yeah? Because we’re coming for them!

A drunk Cameron then proceeded to do a little dance as industrialists stuffed cheques into his waistband.

Cameron launched OPERATION DIVIDE AND CONQUER with his underlings, Theresa May and Iain Duncan Smith. This was in response to that thing getting in the way of their plans. A thing called ‘society’.

Although people in the UK were still prone to bigotry of all kinds, there had at least been progress. Obviously this was a problem, as when the masses aren’t busy hating one another, they’re paying attention to the government.

The plan aimed to drag Britain kicking and screaming back to the 1890s. Targets along the way included:

There was a problem with the Tories’ plan, though. It relied on every person in the UK being like your average Tory minister, i.e. having all the morality of a mechanical shark on crack.

It’s transpired that many in the UK do have principles, however. And that’s why the Tories won’t win. 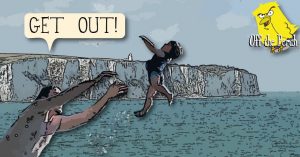 The third child of Wills and Kate, prince Louis, was born on 23 April.

Wills and Kate protested about their newborn’s deportation. Wills said:

But he’s lived here all his life! It was on TV! It was in the papers!

Rudd stared the prince up and down then asked:

When Wills pointed to a nearby Daily Sport, an angry Rudd threw her coffee over it. She then picked a chair up and hurled it at the nearest TV.

“Now he’s in nothing,” she said – rubbing her hands together.

Kate was clearly distraught at this point, and screamed:

But he’s got a birth certificate!

This wasn’t smart to point out, as Rudd snatched the form and shoved it in her mouth – quickly destroying the evidence.

As Wills and Kate complained, home office goons carried the baby away.

By looking at him, the home office was able to deduce that this ‘Louis’ (if that is his real name), was some sort of hereditary German.

As such, we called Germany and informed them we’d be returning their garbage. Germany, however, was confused. Its ambassador to the UK issued the following response:

Are you okay, Britain? Is there a grownup there we can talk to?

Yvette Cooper, who voted for the Tory ‘make it easier to banish royal babies’ bill, is said to be “shocked”. She also said:

Only Labour can stop these royal babies being evicted. Unless… people think evicting babies is a good thing? In which case we’ll evict so many royal babies your crown will spin!

Following a public outcry, the government has claimed to have made a “mistake”. Apparently the bill was only designed to prevent illegal royal babies from entering the country. Theresa May later confirmed:

When I shrieked and raged for a ‘hostile environment’, I never anticipated people losing their cool.

Rudd claims that although she knew, she didn’t know that she knew

There’s been a lot of confusion regarding what Amber Rudd knew about deportation targets. Although by confusion what I actually mean is ‘bullshit’.

Rudd can’t resign before the local elections. As such, she’s been hiding within a labyrinthine web of disprovable falsehoods.

BRITAIN: “Were there targets?”

BRITAIN: “Yes there were: we have them here.”

RUDD: “But I didn’t know about them.”

BRITAIN: “Funny, this memo said you did.”

BRITAIN: “We have a video of you reading the memo and rubbing your hands together.”

RUDD: “I had my eyes closed. And I was rubbing my hands together because I was thinking about whatever it is that makes humans justifiably pleased.”

BRITAIN: “We have a second video in which it’s clear your eyes are open.”

BRITAIN: “If you were cloned and your clone works in government, are you not responsible for its actions?”

BRITAIN: “And you’re sure you’re not the evil one?”

BRITAIN: “Okay, so let’s get this evil clone in here.”

BRITAIN: “We’re going to go get this clone and it will just be you, won’t it?” 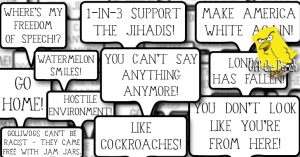 You can’t say anything these days. And you know that’s true, because people let you know what they can’t say just before they say it.

There’s a problem, however.

As the squawking of people saying things they can’t say is risking people’s eardrums.

A professor of paradoxical noise explained the situation to us:

Although it’s true people can’t say these things, that doesn’t mean they technically can’t say them. They can still, for example, speak freely on Twitter and Facebook; in the comment sections of websites; in the middle of angry mobs, etc.

It’s just they can’t say these bigoted things in public. Although, again, they often can. It’s just that they can’t say it without the risk of other people thinking they’re a backwards fuck-head. And even then, they’ll commonly find a receptive audience.

Some people have argued we should debate these bigots, as that’s the only way their bullshit philosophy will be beaten.

Professor Doc Brown and his buddy Marty McFly explained how this works in practice:

They need to debate them, Marty! We’ve been to the future! In 2016, Donald Trump runs for President! But he’s denied the White House as a result of his arguments being rigorously dismantled across several TV debates!

Great Scott, Marty! Look at this newspaper! It says Trump is the President! We’ve landed in the wrong time-stream again!

It was explained that although Trump was debated into the ground by several opponents, he still won. Almost like the ‘public debate will win the day’ strategy doesn’t work in our dimension – because we don’t live in a 19th century novel.

Until this period of silencing bigots ends, you might want to get yourself some earplugs. Because the sound of their silence is deafening.