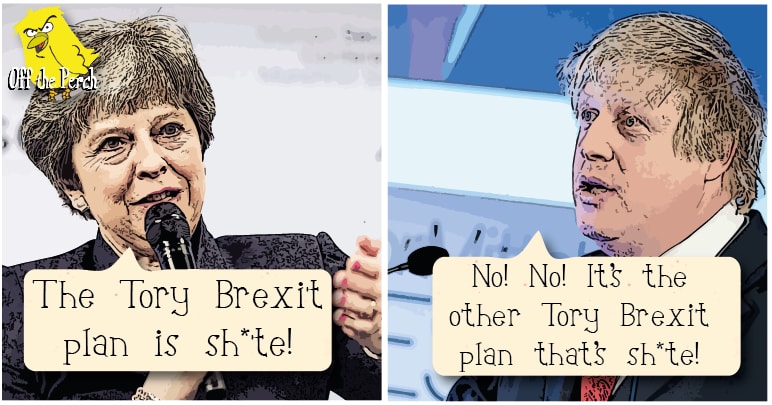 Brexit has caused a problem for the Tories. Before the referendum, half the party were saying it would be the worst thing ever. The other half claimed otherwise. And now they have to deliver it – despite everyone knowing 50% of them think it’s shit.

This problem is magnified by the fact that they can’t even agree what Brexit should be. This means the party is torpedoing every proposal it raises in the most spectacular act of self-sabotage since…

…hmm. There have been so many instances of Tory self-sabotage recently, it’s hard to choose.

Let’s just say the 2017 general election and move on.

The Tories have numerous ideas about Brexit. Most of them are terrible, and several have already been vetoed by the EU. The main two camps could be described as the ‘Leavers?’ and the ‘LEAVERS!’

The Leavers? are demanding the following:

The LEAVERS!, meanwhile, are demanding:

Both sides have been publicly letting everyone know how shit the other is. One side will have to win in the end though. And then it’s up to the Tories to implement a plan which Tories have spent several months telling us is dog shit.