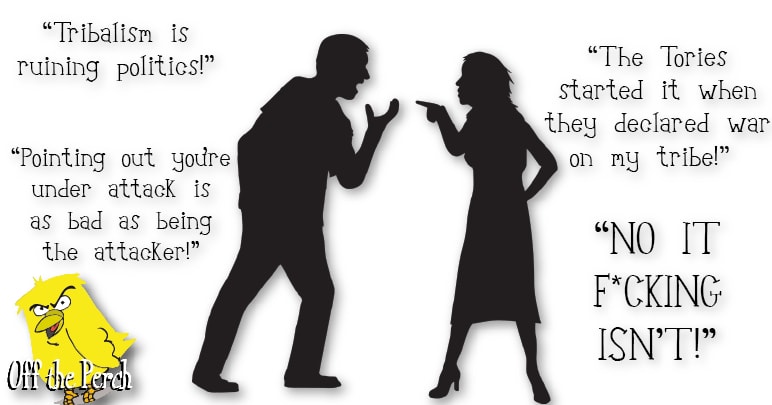 Why are people in this country so tribal?

And by ‘reasonable person’, I mean of course anyone earning over £50k.

Leave this to us!

Am I the only one who sees that tribal politics stops anything getting done? Maybe it’s because my work as a rational genius helps me see things others can’t.

People pointed out they were forced to behave as a tribe because the Tories have drawn a line around their group and said, “YOU PEOPLE ARE A TRIBE NOW, AND WE WILL FUCK YOU AS WE PLEASE.” Others said they stand by these people out of solidarity. Volkswagen said:

Look, if we cling to every human rights violation, how will we get anything done? The 5p bag charge would never have happened if the Lib Dems hadn’t foregone ideology to only pursue things they were interested in.

And also, how can we reverse Brexit if we don’t work with Tories who oppose the HATED BREX*TEERS!?

Someone pointed out that helping the Tories fuck disabled people for a bag charge was an ideological move. It just didn’t look like one because no one expected an ideology that puts shopping bag legislation before human lives.

They also said expecting people to keep quiet about their oppression because it makes it awkward for centrists to work with anti-Brexit Tories is middle class tribalism at its worst. Volkswagen responded by saying:

Saying “tribalism is ruining politics” is a centrist mantra that only sounds sensible if you don’t think about it. Politics in the UK aren’t tribal for nothing. And if you can’t see that, you likely belong to one of the tribes the government has yet to fuck.