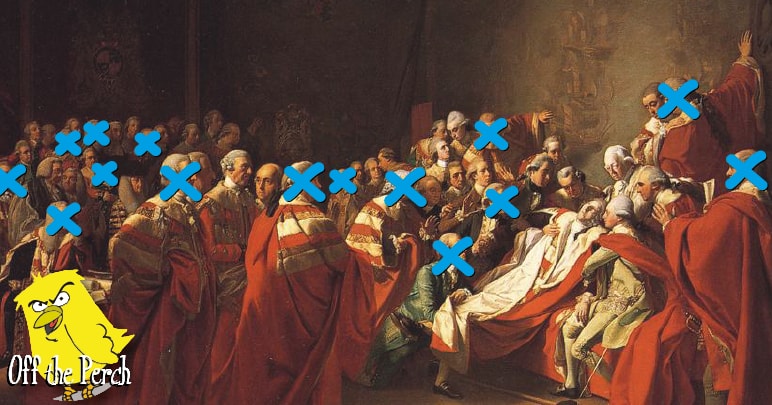 “It’s undemocratic!” they screamed at the men and women they insisted we appoint undemocratically.

They’ve come up with a solution, though. And it’s to abolish any and all Lords (who don’t agree with them).

Prominent Brexiteer / Dickensian pastiche Jacob Rees-Mogg had this to say:

When people voted for Brexit, they were very clear what they wanted! It was that I – Jacob Ulysses Thunderclench Rees-Mogg – should have the power to abolish anyone who crosses me!

Someone said that would make Hard Brexit easier, but what if the remaining Lords disagreed with him on something else?

Then I shall remove these traitors too! And if those who remain betray me next, I shall abolish them also! And I shall carry on in that fashion until none are left, and I – Jacob Handkerchief Leopard-Print Rees-Mogg –  am infused with their undemocratic power!

Someone pointed out that one man thirsting for total control like that was a bit Hitler-esque. Rees-Mogg disagreed with this assertion:

Nonsense! I shall be far greater than Hitler, because I – Jacob Ferrero Rocher Rees-Mogg – am British!

At this point, his supporters began to chant:

Rees-Mogg basked in their adoration as if showering in Châteauneuf-du-Pape.

The Brexiteers have very funny ideas about ‘democracy’ and ‘taking back control’. Except actually they don’t. They just clearly want total power, and will say anything they can to get it.