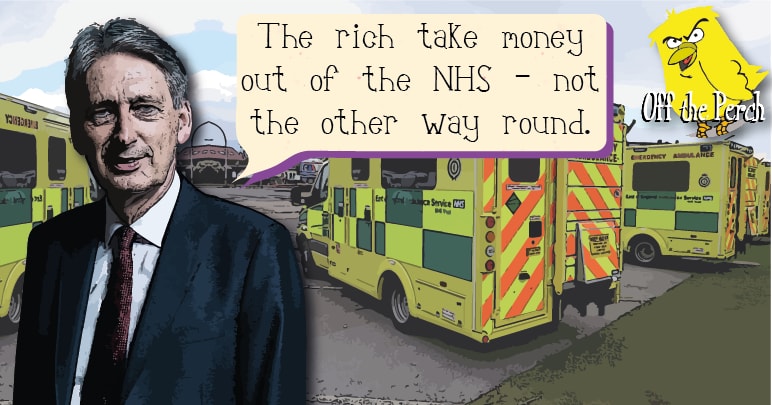 The Tories announced they’ll be giving the NHS some more money (that’s more money rather than enough money). There was some confusion about where this cash would come from though – with the following all being suggested:

There was never any suggestion the Tories would undo years of tax cuts for the rich, however. The very same tax cuts that were funded by underfunding the NHS.

The question of why the tax cuts couldn’t just be reversed was put to Philip Hammond:

Err… I hadn’t thought about that actually. Give me one second.

Hammond then proceeded to call the five guys who own 250% of Britain’s wealth.

“No, it’s no good – they don’t want to give it back,” he explained. “Ironically, they say the extra dosh they’ve earned from those tax cuts would be enough to pay the NHS deficit a million times over. HA HA HA HA HA!”

Hammond was asked if this means we’re not actually ‘all in it together’.

“We’re certainly not all in the NHS,” he said disgustedly. “Ghastly place. And anyway, if these plebs don’t like being poor, how come they don’t have any cash? It’s baffling why they don’t just inherit some.”

The chancellor then walked away, whistling We’re in the Money.