As Turkey prepares for its most important election in years, thousands of people ‘are destroying fear’ - Canary 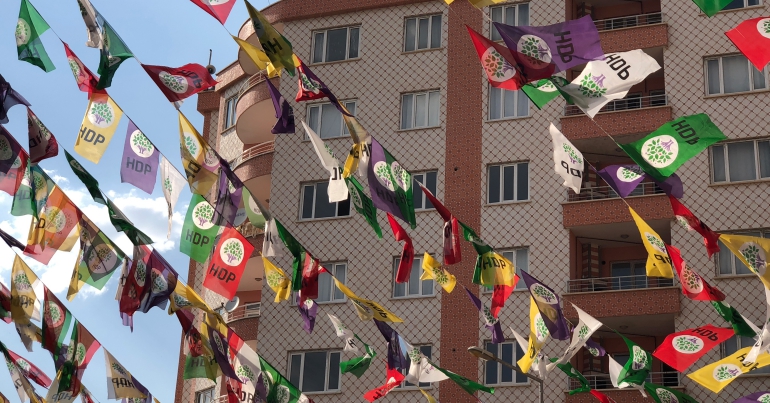 On 24 June, Turkey is going to the polls for what is widely described as the most important election in modern Turkish history. The election is being held under a state of emergency. And for Kurdish communities, particularly those in the south east of the country, the election is set against a backdrop of fear and repression.

A huge rally in the heart of the key majority-Kurdish city of Diyarbakır/Amed, however, has given hope to those opposing current president Recep Tayyip Erdoğan:

Diyarbakır is determined, and ready for June 24. We will definetely win! pic.twitter.com/xddxBYeDct

Speaking at a meeting which The Canary attended on 21 June, Hişyar Özsoy – deputy chair for foreign affairs of the left-wing and pro-Kurdish Peoples’ Democratic Party (HDP) – said there is a “climate of fear” in Turkey but:

Why is this election so important?

This election wasn’t scheduled to take place until November 2019. But Erdoğan has called an early vote. It follows a close referendum victory for Erdoğan in 2017; a referendum which changed the constitution of the country. It gave him sweeping presidential powers, including being able to issue decrees and directly appoint the judiciary.

Meanwhile, during this election, Erdoğan is dominating the airwaves. And HDP presidential candidate Selahattin Demirtaş is running his campaign from a jail cell where is detained on trumped-up terrorism charges.

Özsoy believes that Erdoğan is attempting to “institutionalise fascism” with the present election. And indeed, the president has maintained his power until now thanks in part to an alliance with neo-Nazis (whose hand sign he has made in public).

But Özsoy is also positive. He believes that Erdoğan’s position has weakened and that there are many people across Turkey who are unhappy with his rule.

It is easy to understand what Özsoy means when he talks about “a climate of fear”. On 24 May, the Permanent Peoples’ Tribunal (PPT) found Erdoğan and the Turkish state guilty of war crimes, as well as crimes against humanity, against the Kurdish people. The tribunal heard evidence of atrocities committed by the state between 1 June 2015 and 31 December 2017, including:

This situation is why the scenes from Diyarbakır/Amed on 20 June gave people hope:

Amazing crowd in #HDP rally in Diyarbakir. Colleagues I spoke with over there say there was a historical crowd and people were very enthusiastic and determined @hdpdemirtas pic.twitter.com/Gd5sBsUsUm

The reign of angst is over. pic.twitter.com/F37soE33HL

People whom The Canary spoke to in Diyarbakır/Amed hadn’t seen a rally like it in over ten years. And they spoke of the importance of people whom the state has smeared as terrorists coming together in the hope of democratic change. But unfortunately, because these historic scenes from Diyarbakır/Amed were peaceful, there was little to no coverage of them in the mainstream media.

Whatever happens on 24 June, though, Kurdish communities will continue their struggle for freedom, democracy and self-determination. Because as Özsoy stated:

We are survivors. We know how to survive.

– Also write to Theresa May and your MP. Ask them to urge Turkey to resume peace talks with its internal opponents, and to release all political prisoners. Until that happens, ask them to cancel and stop approving arms sales to Turkey; and support Campaign Against Arms Trade to help make that happen.