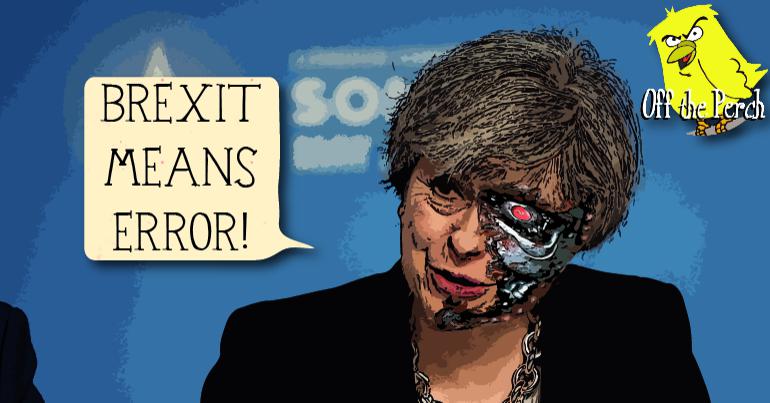 Theresa May finally delivered a Brexit agreement this week. The problem is she won’t stop delivering it.

The Maybot has malfunctioned. And she’s pursuing her broken Brexit whether we like it or not.

Signs of the Mayminator going on the fritz began at the Conservative Party conference. Her operating system crashed as she walked on stage. Party officials claimed she was ‘dancing’, but people could see something had gone wrong.

She’s also attempted to go over her ministers’ heads and appeal directly to voters. That’s why the PM has been turning up at people’s houses, sticking her head through their catflaps and shouting:

The pundits who’ve spent the past two years telling us May is a credible person are obviously ‘shocked’ by this turn of events. At the end of the day, though, this is what happens when you put a heartless robot in charge of the country.

Thanks to democracy, the UK is completely unable to stop this bland terror. But democracy is still better than the alternative. If May had more power than she does now, she’d possibly be able to enact some of the nonsense she’s threatening.