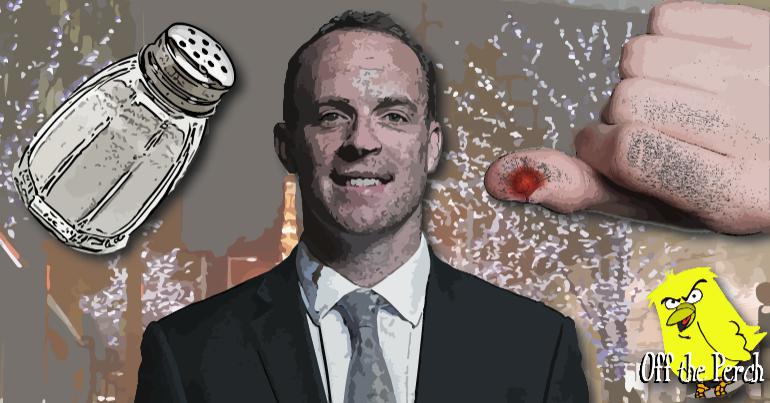 When the Tories started inflicting their brutal austerity programme, people asked why.

Are the Tories just inhuman monsters?

Are they simply looking out for their rich mates?

Do they actually think increasing poverty will revitalise an economy that’s driven by spending?

No – it turned out they just wanted more foodbanks in the country for Christmas photo opportunities.

A new trend : Tory MPs posing for PR pics for #Foodbanks – you just couldn’t make it up.
It’s like pyromaniacs posing by the fires they created. pic.twitter.com/H68WQEI6Q0

Off The Perch visited a foodbank as Tory MP Dominic Sidemouth turned up for his photo op. The awful man had brought several canisters of salt with him that he liberally tossed at people.

“Here’s salt in your wounds, you fucking peasants!” Sidemouth bellowed, as he laughed and quaffed his foul smelling eggnog.

When someone pointed out they didn’t have a wound, the MP took his penknife out and scored the man’s arm.

“You’ve got one now!” Sidemouth bellowed. “And you’re also an ugly fucker! How’s that for adding insult to injury?”

He then proceeded to pour salt into the minor wound he’d just inflicted.

This particular story ended well, thankfully. As the gleeful Sidemouth left the foodbank, none other than Santa Claus himself flew overhead.

“I’ve made a list, dickhead!” the jolly Saint Nick shouted. “I’ve checked it twice! And guess who’s been naughty not nice?”

The festive deity then pelted Sidemouth with coal until the MP dissolved into slime. And although it didn’t stop any of his colleagues, it is at least a nice image to end on.