Theresa May admits to not understanding what 'negotiate' means - Canary 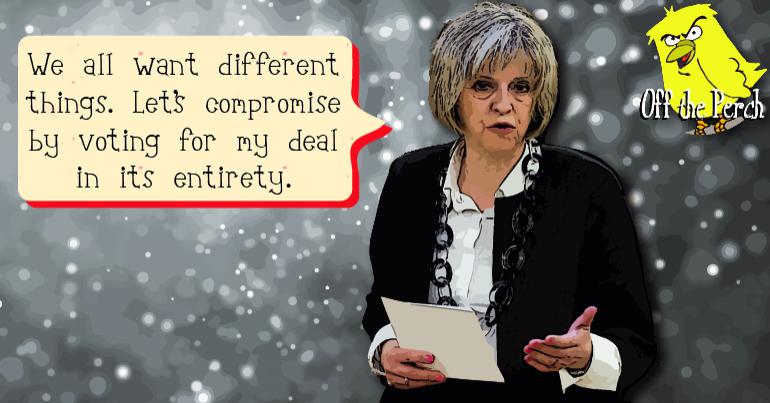 After losing the vote on her Brexit deal, Theresa May has little option left but to negotiate with other parties. The problem? She literally doesn’t know what ‘negotiate’ means.

Although, to be fair, that should have been obvious considering the past few years.

Labour refused to talk to May until she ruled out ‘no deal’. The other parties seemed less worried about that prospect (until later) but we did learn something from their attendance. Namely that May’s idea of negotiating is to repeatedly demand that people accept her deal.

“It was creepy,” Caroline Lucas said. “She just kept shouting ‘Go on! Go on! Go on!’. When we asked her what elements of her deal she’d be willing to discuss, she shouted, ‘None! I’m here to negotiate – not find a deal that’s mutually attractive to everyone!’.”

As the party leaders left, a weary Tory outside explained:

She did the same thing to us. We tried getting her a ‘word of the day’ calendar in which every word was ‘negotiate’, but she still didn’t get it.

It’s unclear if parliament will be able to negotiate a different deal. That’s not because there isn’t a better deal to be had, but because May’s impossible to work with.

There is an alternative, however.

She could somehow manage to concoct a worse deal. Considering how things have worked out so far, that’s probably the most likely outcome.