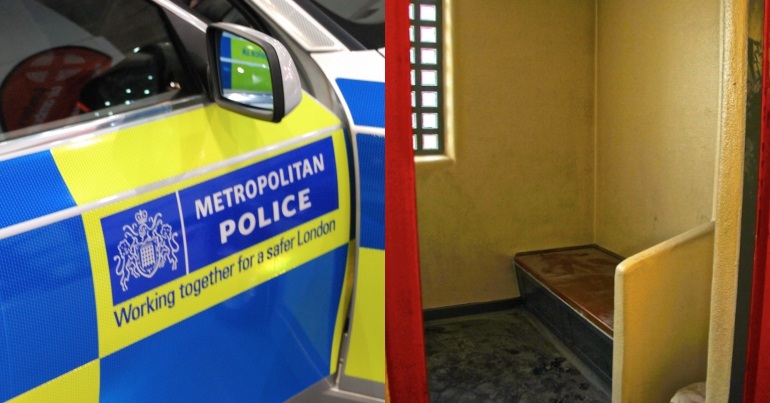 A civil liberties group has accused the Metropolitan Police of “violent” and ‘abusive’ policing following an inspection of 15 police station custody suites in London.

During a 12-month period, HM Inspectorate of Constabulary, Fire and Rescue Services found that 10,000 people or 16% of all suspects were strip-searched. Its report described a number of strip searches as not “warranted or properly justified”.

Amongst its findings, the report said that strip searches were used on a “high proportion” of children taken into custody. It also stated that the use of force in custody was not always justified or properly recorded:

The governance and oversight of the use of force in custody were not adequate to ensure that all use of force was proportionate and justified for the risk or threat posed. Not

Kevin Blowe, coordinator of the Network for Police Monitoring, was damning about the underlying message of the report. He told The Canary:

Describing the Metropolitan Police’s excessive use of strip-searching of suspects as ‘unwarranted’ is a polite way of saying this is violent policing and an abuse of police powers.

The report also found the number of Black and Minority Ethnic people subjected to strip searches was “disproportionately higher”. This is backed up in national findings. A 2015 report found that:

While 3% of the population was from African-Caribbean groups in the forces we inspected, people from these backgrounds represented 9% of the custody throughput, and 17% of those strip-searched.

The UK has a police force that even senior police officers admit is still ‘institutionally racist’. And Blowe believes that these figures show that institutional racism is still a big problem:

The targeting in particular of black suspects shows too that institutional police racism remains a big part of everyday policing.

A spokesperson for the Met Police said strip searches were not carried out “as a punitive measure”. But many people who’ve been subjected to such searches disagree. In 2013, Konstancja Duff was strip-searched by force. She believes the search was used as a punishment because she passively resisted and challenged the police:

What I said precisely to the panel was: ‘You are endorsing the commonplace use of repressive and violating tactics like strip searching to punish and intimidate anyone who does not simply go along with being treated unjustly by police’. They are effectively saying: ‘This is our policy; Met police policy is to strip search anyone who stands up for their rights or the rights of somebody else’.

And Blowe said that the police’s claim was “not credible”:

It is simply not credible for the Met to claim strip searches it has been unable to properly justify are never “a punitive measure” when inspectors have found poor recording and inadequate evidence for the disproportionate use of force.

According to the spokesperson from the Met, searches are used as:

a safeguarding measure to protect not only officers working in our custody suites, but individuals coming into custody and those already detained”.

Duff’s case shows how hard it is to hold the police to account for their actions. She was charged with assault and obstruction but cleared by magistrates. Duff then pursued a civil case against the police that culminated in Sergeant Kurtis Howard facing a hearing for gross misconduct. But halfway through the hearing, Howard was cleared. The panel decided there was no case to answer. She is now trying to take the case to judicial review to get justice for what happened.

While the extra scrutiny is welcome, these practices will continue unless senior officers are held to account for those under their command. There is, however, little sign of this happening internally.

And Blowe believes it is down to all of us to put pressure on the police:

Public pressure and exposure of police violence seem like the only way to bring about meaningful change.

Statistics can be dry. They don’t communicate the humiliation and trauma hidden behind them. Duff suffered PTSD as a result of what happened to her and she isn’t alone.

It’s important to remember that behind every “unwarranted” strip search is a human being; a human being who has unnecessarily suffered and gone through a degrading experience due to the actions of the people who supposedly represent law and order.

And remembering that human impact is crucial, if we’re to do as Blowe suggests. Because it’s down to all of us to expose and challenge this violent policing.