Arms dealers are planning a ‘prestigious black tie dinner’. But you can stop them 'enjoying the relaxing atmosphere'. - The Canary 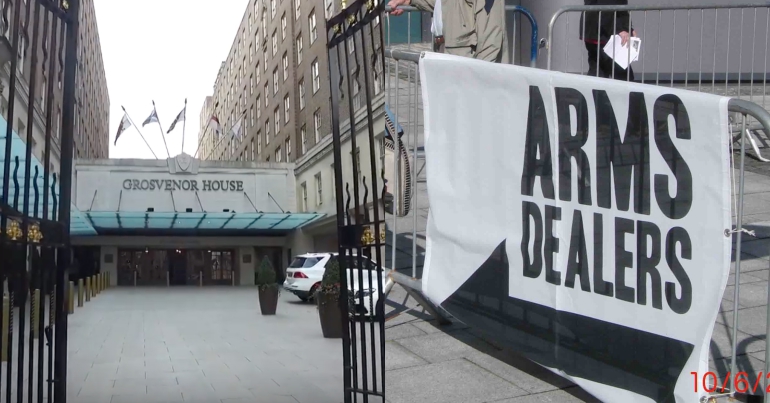 On 23 January, arms dealers are having a “prestigious black tie event”. The annual dinner, organised by ADS (the aerospace, defence, security, and space trade association in the UK):

affords the perfect occasion to network with colleagues, entertain guests or simply enjoy the relaxing atmosphere.

But Campaign Against Arms Trade (CAAT) is organising a protest outside the event at the Grosvenor House Hotel on London’s affluent Park Lane. Speaking about the Saudi-led war on Yemen, it insists:

We will not let those profiting from and enabling this war celebrate unchallenged. Their trade causes death, starvation and devastation across the world, and particularly in Yemen.

Prices range from £2,200 for a table for ten (members’ price) to £10,000 for a “branding sponsorship package” for the sold-out event. Attendees will be treated to a drinks reception upon arrival followed by a three-course meal. International Trade minister (and former chair of the BBC Trust) Rona Fairhead and former home secretary Alan Johnson are speakers.

CAAT describes the event as an opportunity to:

And it says it’s clear that:

Many of the bombs [used in Yemen] are made by the arms companies present, and have been sold with the support of the politicians in attendance.

14 million people are at risk of famine in Yemen, including 5.2 million children. But despite several countries (including Germany) pledging not to sell any more arms to the Saudi regime, the UK continues. CAAT explains:

The war in Yemen has caused the worst humanitarian crisis in the world. More than 85,000 children under the age of 5 have died from malnutrition. The fighting and the Saudi-imposed blockade have caused a cholera outbreak that has affected over 1.2million people.

And it lays the blame right at the door of the government:

The UK government is directly involved in causing this suffering. It has licensed almost £5billion of weaponry to the Saudi regime since the bombing began in 2015. UK-made planes are dropping UK-made bombs in Yemen.

Protesters have previously targeted arms trade dinners. And it’s easy to see from the footage how easy it is to disrupt the “relaxing atmosphere”:

Together, we can make a difference

Together, we can make a difference. We can make sure that they don’t get to attend their fancy banquet without being confronted over how they make their money. And we can certainly make sure they don’t enjoy the “relaxing atmosphere” of their blood-drenched feast.