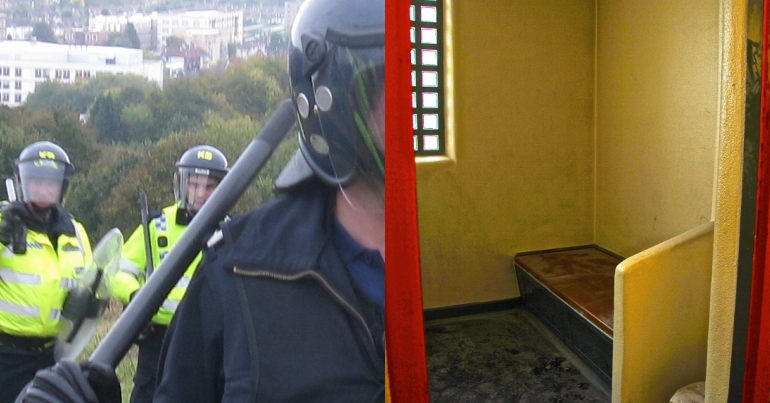 On 30 August, a police sergeant was cleared of gross misconduct. He faced disciplinary action after ordering a strip-search on Konstancja Duff. Duff, an academic, was arrested in 2013, after offering legal advice to a 15-year-old who was being stopped and searched.

The case shows exactly why it’s so hard to hold police officers to account. And why the disciplinary process is so fucked up.

Duff passively resisted her arrest and treatment at the police station, refusing to give her details or cooperate with officers. The police handcuffed her and used leg restraints and had her clothes cut off her while male officers were watching. She suffered injuries that affected her Master of Performance degree at the Royal College of Music. Duff, who has since been diagnosed with Post Traumatic Stress Disorder (PTSD), told the Guardian:

All the things I had to do in my life were put on hold. I don’t think that what happened to me was unusual and I’m special. I think police routinely use these kinds of tactics, and I’m in the lucky position to do something about it.

She was charged with assault and obstruction but cleared by magistrates. Duff then pursued a civil case against the police that culminated in Sergeant Kurtis Howard facing a hearing for gross misconduct. But halfway through the hearing, Howard was cleared. The panel decided there was no case to answer.

Duff believes that the police strip-searched her as a punishment:

What I said precisely to the panel was: ‘You are endorsing the commonplace use of repressive and violating tactics like strip searching to punish and intimidate anyone who does not simply go along with being treated unjustly by police.’ They are effectively saying: ‘This is our policy; Met police policy is to strip search anyone who stands up for their rights or the rights of somebody else.’

And it’s not just the Met police who do it. I know from personal experience, from the experience of friends and others who’ve told me their stories, that this is common practice.

I’ve been strip-searched several times by the police. On several occasions by force. And predominately, it’s been a punishment because I’ve refused to co-operate.

In 2007, I was arrested for breaching police bail conditions that had already been dropped in court. Instead of contacting the court, a police officer with whom I’d had previous dealings arrested me. Like Duff, and wanting to protest my innocence, I offered passive resistance.

At the police station, the officer lied. He claimed I’d been fiddling with the back of my trousers and should be strip-searched as he believed I was concealing a weapon. By this point, I’d been handcuffed for several hours and could barely feel my hands, let alone fiddle with my trousers. And he knew me. He knew I didn’t have a weapon. It was vindictive and it was a punishment. Still cuffed, I was dragged to a cell and searched by force.

On another occasion, and coincidentally for another fabricated bail infringement, I was strip-searched by force by officers from Devon and Cornwall police. Again, I’d offered passive resistance. On this occasion, I wasn’t even told. I was dragged to a cell, pinned down by male officers, and only realised what was happening when other officers started removing my clothes. Other male officers, including the custody sergeant, watched from the corridor.

Let’s pause for a moment…

And this is important. Not because I want sympathy. But because I think it’s crucial that we recognise the impact repressive and vindictive policing has on mental health. Sometimes the mental scars take far longer to heal than the physical ones.

Like Duff, I’ve found justice to be a myth; a utopian vision that just does not exist when it comes to holding police officers to account. In Duff’s case, the panel decided that because she was uncooperative, a risk assessment couldn’t be carried out, and therefore Howard was justified in his actions.

I received compensation for both of my cases above, but no action was taken against any officers involved. I received an apology from Devon and Cornwall police after a fight. And after the force attempted to deny the trauma, claiming that I wasn’t traumatised because I’d written articles about policing. The sergeant who authorised the search received management advice. In other words, fuck all happened.

I’ve only had one case that’s gone as far as the tribunal following a high profile arrest that received front-page media coverage. I was violently arrested after asking a police officer for his number as he wasn’t displaying it. Amongst other assaults, PC Fisher strangled me and excessively pressure pointed me; an arrest I still have injuries from.

Eventually, Fisher was taken to tribunal for misconduct and found guilty. But he appealed and won. I wasn’t even informed that he was appealing until months after it’d happened.

The panel in Duff’s case basically ruled that Howard was justified in authorising the strip-search because Duff was uncooperative; that not cooperating could be read as a sign of mental ill health.

This is dangerous and wrong. It is imperative to resist unlawful policing. As I wrote following my Devon and Cornwall arrest:

I’m not co-operative in custody. I may struggle, but I am not violent. Not out of any pacifist paradigm but out of pure pragmatism… But my pragmatism only goes so far, and even on occasions when I’ve tried to co-operate, my fuck-you impulse has been stronger. Yet maybe this is also pragmatic. My survival depends on that ability to say no. The moment I start bowing my head and subjugating myself to their procedures is the moment I lose.

Saying no and withdrawing consent is not a sign of mental ill health. It is a survival instinct.

This has to stop

I’ve experienced and heard too many stories of punishment strip-searches. It has to stop. This isn’t about police safety. This isn’t about ‘concern’ for detainees’ well being. The police do it when they don’t like someone. They do it to subjugate, humiliate and repress people. And when you’ve experienced cops holding you down on the floor, twisting your handcuffed arms to the point where you think they’re going to break, and pressure pointing you until you’re screaming in pain, and yelling in your ear: “Have you got the message yet?” then yes, the message is crystal clear.

But it’s not a message I’ll ever listen to. I’ll carry on resisting. As will others. Duff’s case shows how fucked up the police disciplinary process is. Justice against police officers is a facade. And our fight is nothing compared with the experiences of those trying to get justice for loved ones killed in custody.

And it’s a fight that will continue. No justice. No peace.

– And support Counselling for Social Change who offer free counselling to campaigners suffering from PTSD.