Off The Perch goes to Davos - Canary 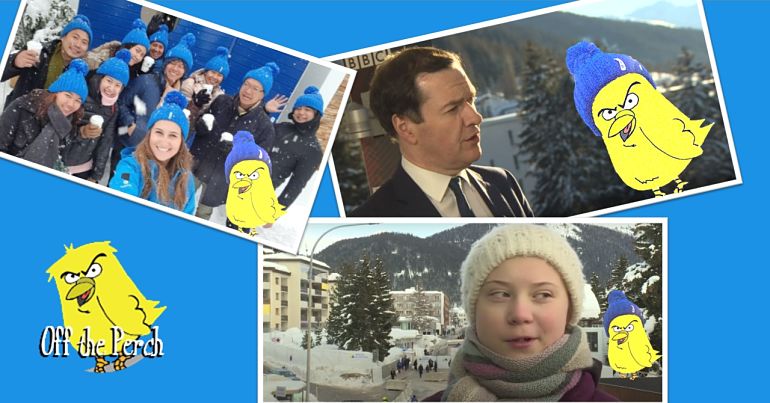 Always keen to be where the action is, Off The Perch has just spent several days in Davos. As you can see from our holiday snaps, we got fully into the Davos spirit with our free bobble hat from Zurich Insurance and also met some of the big stars who were there.

Environmentalist Terry Chestnuts hopes that Brexit could see the end of what he calls “the craziness of the Common Agricultural Policy”. But he also says: “Michael Gove gives me the shits”. Chestnuts declared himself “chuffed as Quorn” to meet teenage climate warrior Greta Thunberg, but her anti-flying stance hit him hard. As we go to press, Chestnuts is somewhere between here and Davos, on a skateboard. He reckoned he could exploit the ‘potential energy’ of Davos being halfway up an alp and be able to freewheel most of the way home.

Osborne on the snow

Community rave promoter Melody Bassline had a right go at George Osborne. She collared him at the bottom of one of the nursery slopes:

You’ve got a cheek tobogganing around on a battered red briefcase, which by the way I think you should have given back. You ballsed up the country and then walked straight into a cushy job ‘editing’ the Evening Standard. And you still get to come on these jollies and hang out with your jet-set mates.

I want another vote, because I’m shit-scared of what it’ll mean for lots of my friends if we leave and I can’t think how else to stop it. But I just talk to people face-to-face, not from some lofty platform. And d’you know what? It works a hell of a lot better.

We asked Ken Chisel, from the Institute of Criticism, what his impressions of Davos were. He started by pointing out that Davos is, of course, just the location:

It’s the annual meeting of the World Economic Forum. A chance for policymakers as well as business and community leaders to come together and discuss the issues of the day. This year the ‘theme’ is “Globalization 4.0: Shaping a Global Architecture in the Age of the Fourth Industrial Revolution”. I don’t have the first flying shit of an idea what that means. will.i.am is here. I’m really not sure how that helps.