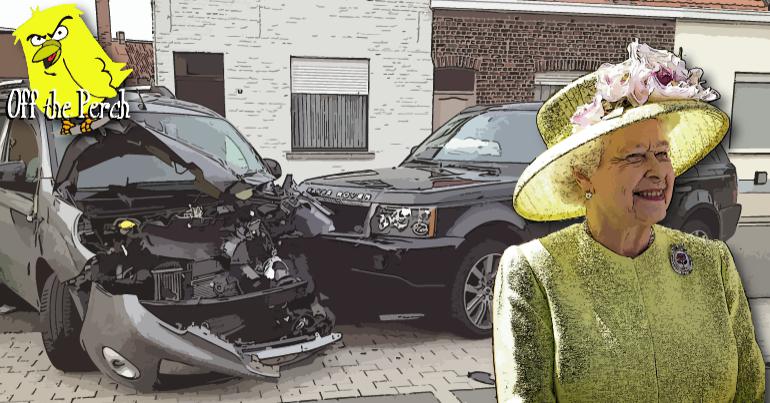 The Queen has decided to intervene in the Brexit debate. She didn’t mention the B word itself, but she did talk about “common ground” and respecting “different points of view”. This prompted big thinkers on either side of the debate to reply:

Shove it up yer arse!

It also saw some ponder:

Is this the same monarch who can’t even stop her suitor terrorising the countryside in his Land Rover?

One is not amused

A source close to the Queen says she’s been trying to ‘Brexit’ Philip from his car. The problem is Philip wants to stop driving while maintaining all the benefits of being a driver. They suggested he could just use one of the several hundred chauffeurs they employ, but Philip shot back:

Where’s the bloody fun in that? The wretched car monkeys won’t even pull out into traffic when I bark orders at them! And one of them was from the fucking north!

Negotiations with Philip are ongoing. At least they are right up until the point when he drives off, anyway.

The recent saga of Prince Philip vs the Highway Code will be portrayed in the new season of Netflix’s The Crown. Originally, they booked Kathy Burke to play the Queen (with the aid of prosthetics). Burke refused to read out the lines as written, however, instead shouting things like:

Stop driving around that twat-wagon you stupid, old cunt.

I threw your driving gloves in the bin you horrible fucking skeleton; you’ll be in there with them if you don’t stop taking the piss.

We should have hung the bastards – just like the French did.

Burke claims this last quote was misleading – saying she’d actually been talking about tapestries. She went on to explain her preferred method of execution would have been “just twatting them with whatever came to hand”.

Although Burke has been let go from The Crown, there are hopes she may help out with the Brexit negotiations. She probably won’t have a fix, but she will swear at all the right people, at least.