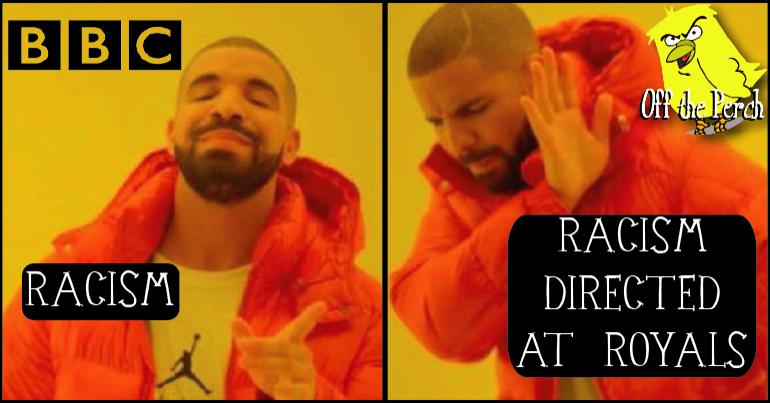 The BBC has no time for racism. That’s why it sacked Danny Baker. Conversely, it does have a lot of time for racists. Hundreds of broadcasting hours every year, in fact.

Is that balance? Condemning one act of racism while platforming shitheads like this:

Nigel Farage has been accused of openly discussing conspiracy theories linked to antisemitism during a series of interviews with a far-right US talkshow. https://t.co/LiJPE7vtRu

Oh @BBC , you forgot to sack this raging racist? Is it cos he is a millionaire?

And today interviewing this guy:

Source for point 2 – he is a vile racist about Arabshttps://t.co/o4ueQPnZyz pic.twitter.com/Ugfr30hW0N

So what’s the deal? Well, according to one senior executive, it’s that:

We’re dedicated to representing a variety of opinions. Unless said opinions disrespect the Royals, IN WHICH CASE THERE WILL BE BLOOD!

Look – we can’t stop Nigel Farage appearing on every politics show that goes out. We tried once, but he just ignored us. What we have done is made clear we’ll take him off the airwaves if he directs his hard-right rhetoric at prince Archie.

When asked why they don’t do that for all hard-right rhetoric, they said:

Look, they’re just ideas, they can’t hurt you. Unless you direct them at the royal family, in which case we will hurt you.

Obviously there’s no place on the national broadcaster for a man likening a mixed race baby to a chimp. It’s just a shame there is space for a bunch of fascist apes. But still – at least there’s some progress. It’s just specifically only for people born into the royal family.