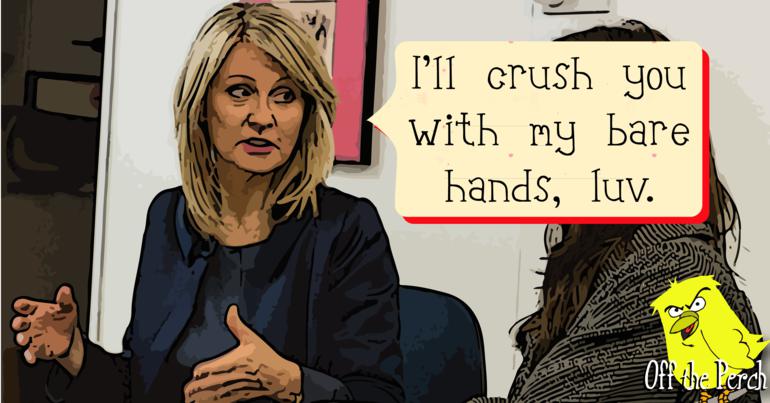 Esther McVey got a decent amount of airtime recently, and she used it to voice her reprehensible views. Despite the attention, she’s turned out to be the least popular Tory leadership candidate ever:

Despite her humiliating defeat, McVey has vowed to carry on doing what she does best: crushing poor people.

For a while, McVey had her dream job at the Department for Destroying the Poor and Disabled (DWP). That’s not the department’s official name, but she did insist on calling it that. She also demanded that her underlings refer to her as ‘Mrs Bastard’.

McVey eventually had to leave the DWP – namely in protest that Theresa May’s Brexit deal wouldn’t be sufficiently damaging to poor people. She hoped to once more have power over the nation’s unfortunates, but it turns out even her own party can’t stand her.

With little actual power, McVey is now forced to hang around outside job centres. One observer spotted her this morning tossing handfuls of gravel at a benefits claimant. Someone else saw her screaming profanity at a depressed single mother.

Goon but not forgotten

If it weren’t for all the other horror-sacks remaining in the leadership race, McVey’s obliteration would be worth celebrating. Although, saying that, fuck it – it is worth celebrating a little bit: