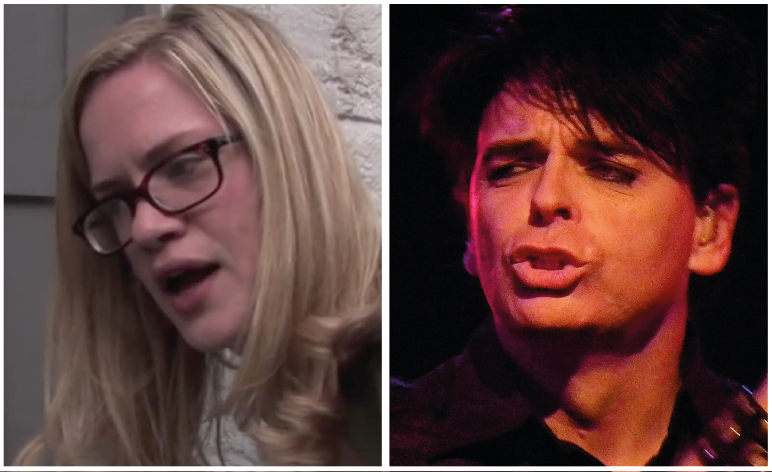 Electro-pioneer Gary Numan has a new album out. During the course of promoting it, he’s been talking about having Asperger’s syndrome, diagnosed in the UK as Autism Spectrum Disorder (ASD). This is a condition I have myself, and I’m always interested to hear about Numan’s experiences with it.

But one Sunday Times columnist was not: 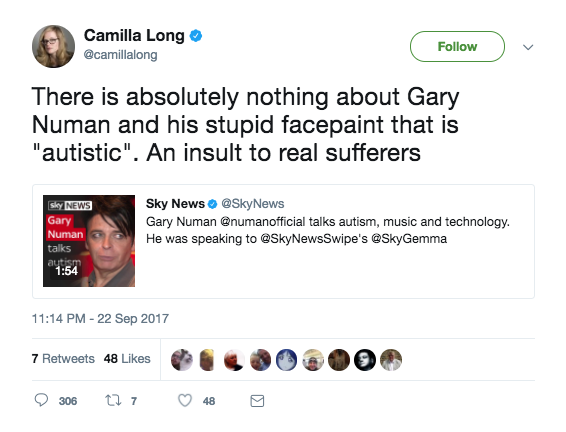 For some reason, Long seemed to think she was talking on behalf of the autistic community. But the community has stepped in to let her know otherwise.

It’s not because I don’t like people – I do.

I’m just waiting for me to put my foot in it and say the wrong thing and it’s a pressure and it’s a worry.

As someone with ASD, this sounds a hell of a lot like ASD to me. But Long seems to have taken umbrage with the fact that Numan has no official diagnosis:

The fact that he is self-diagnosed doesn’t change the fact that the symptoms he described do sound like ASD.

Speaking to Autism Connect, Numan spoke openly about having no formal diagnosis. He also said:

I had some problems during my school years and, after many trips to a Child Psychologist, it was suggested that I had Asperger’s. I’ve never known for sure but I’ve always accepted that to be the case.

Some people seem concerned about it but I have always seen it as a positive thing. Yes, I’m somewhat awkward socially, but that seems a small price to pay for the advantages that come with Asperger’s.

I’m obsessive, but that’s a vital and useful trait for people in the music business. I’m driven and highly focused on things that I’m interested in, like my musical career.

A child psychiatrist at St Thomas’ Hospital in London suggested it might be Asperger’s. At 15, I was put on Valium and Nardil for about a year but as my mum hadn’t heard of the condition she thought the diagnosis was an insult to her parenting so we stopped seeing the psychiatrist and it was brushed under the carpet.

Numan has good reasons to self-diagnose. He has clear and consistent symptoms, and he has literally been advised he might have the condition by a professional. Self-diagnosis also isn’t the insult that Long makes it out to be. I personally knew there was something different about me for 27 years. I knew I was autistic for five years. And I’ve been officially diagnosed since March.

As such, when I hear someone with no formal diagnosis but clear symptoms talking about ASD, I feel a bond with them. I do not feel a need to publicly attack them or call their experience into question. And judging by the responses to Long’s comment, other ASD people feel the same way.

Everything wrong with what Long said

You can tell that Long is a professional at putting her foot in her mouth by how much wrong she managed to fit into one tweet:

This is a very apt thing to say. The term ‘sufferers’ should be reserved for people with diseases. Or people who feel compelled to read Long’s columns for some reason:

Autism isn't something you wear on your face!

You shouldn’t judge a book by its cover. Although, actually some people with ASD do express themselves through how they look. Me and my gold cowboy boot wearing son are two of them. And the writer Gwendolyn Kansen summed up this feeling of coming alive through appearance when she said:

It’s common for autistic kids to get attached to objects. But that dress was different. I put it on and became me.

If you can’t get it right, get it Long

We may never know how deeply Long understands ASD, as she seems to have logged off Twitter since posting these comments. Maybe she has close friends or relatives with the condition? Maybe she’s secretly a trained psychologist? Or maybe she just saw ‘Rain Man’ on a plane once and managed to stay awake for nearly the entire film?

We do know how well she understands talking publicly about the condition though. And that’s not very well at all.

What you do get is the opportunity to serve as an educational tool.

You’re this week’s example of ignorance.