Dear Tim Farron, get your bleeding heart the f*ck out of my vagina. Sincerely, An Angry Lesbian. [OPINION] - Canary 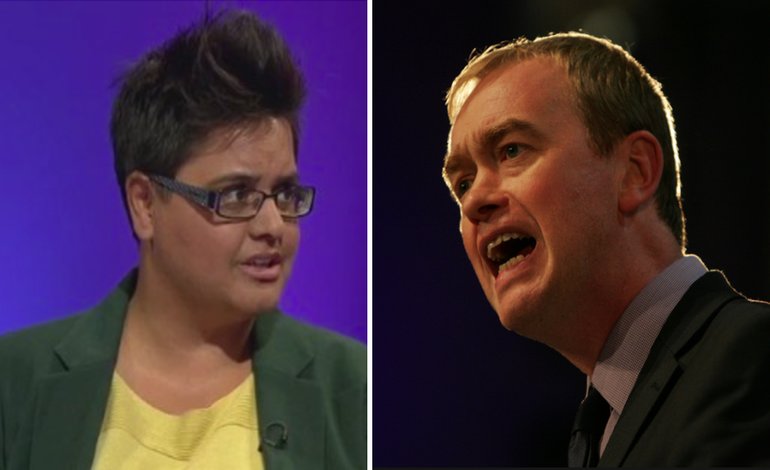 How about you take your bleeding heart the f*ck out of my vagina? After all, I don’t recall once making a public statement about where you park your penis. And on this issue, some reciprocity would be appreciated.

I’m not Queen of The Gays, just one angry lesbian. But let’s pretend for a moment that I am in fact The Queen of Queens. On behalf of my people, just shut the hell up.

Gay sex is a sin?

We didn’t appreciate you dragging our sex lives into the 2017 general election. Any political leader who has to consider deeply whether our right to love (and make love with) our partners is worthy of eternal damnation is no friend of ours. That sort of attitude is not an expression of Christian values, just plain old-fashioned homophobia. You know how I know that, Tim? Desmond Tutu told me.

But you made conciliatory noises. You said you’d been wilfully misinterpreted by the gutter press. Many well-intentioned folks gave you a pass. And you shafted them harder than a Soho rent boy.

Because now, you tell us you DO think gay sex is a sin; and that you lied for votes.

We are so over this bigot hokey cokey, Tim. In, out, in, out, bigot all about just isn’t cutting for us anymore.

Once again, you’ve made it crystal clear that you and your party will say whatever it takes to win power. And after the ballot boxes are packed away, you’ll do whatever the hell you please. Yes, I am going to say it. TUITION FEES, TIM! Your party signed a damn pledge to scrap them in opposition. Then once in coalition, you trebled them. Trebled them!

The Liberal Democrats are neither liberals nor democrats. And we’ve had it with the lot of you.

You defended the marketisation of our NHS. You signed off on welfare cuts that catastrof*cked the lives of sick, disabled, and elderly people. You backed some of the most Orwellian legislation that ever went through our parliament. And all the while, you told us to suck it up. You told us that you were actually the conscience of the Coalition. Tim, you pissed on us and told us it was raining.

So thank you for reminding us why a vote for you lot would be better spent on Lord Buckethead.

In fairness, those who gave your party another chance after Clegg flounced off are getting no sympathy from this Queen of Queens. Because when you became party leader, you didn’t disown one bit of that bulls*t. Quite the opposite. In your first speech as Lib Dem leader, you said:

We paid a heavy price for our time in government, but we did right by our country.

Tell that to Linda Wootton, Tim. Oh, you can’t. Because she’s dead. Along with Brian McArdle, Colin Traynor, and countless others. They died in pain and terror thanks to your government. You paid for your failure in lost parliamentary seats. They paid with their lives. Get a grip of yourself.

And now, you come back from the political wilderness into which we flung you last summer. Not with humility or repentance. But to double down on everything that drove us to banish you there in the first place. This leaves us no choice but to give you a very frank, unambiguous response.

And f*ck YOU, Tim Farron.