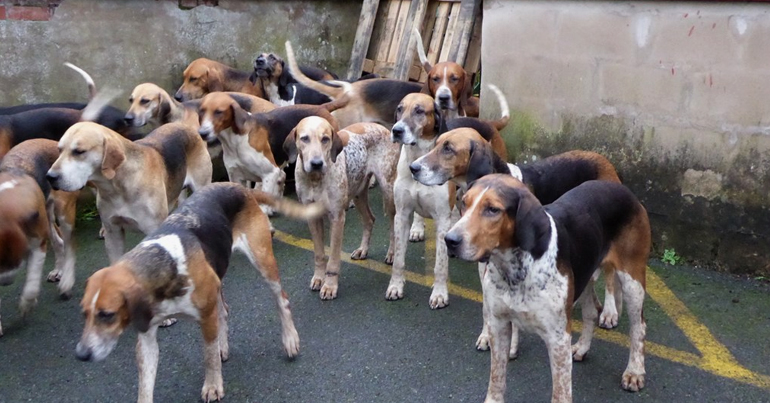 Six hounds from the Four Burrow Hunt, based in Cornwall, were trapped in a mine for days. CornwallLive reported the hounds fell down a shaft on 24 November after getting under a “wire mesh cage” covering the entrance. The Cornwall Fire and Rescue Service arrived four days later, on the morning of 28 November, to recover the hunting hounds.

This incident is just the latest example of the danger hounds are put in. And it’s a reminder of just how much hunts really care about animals.

It’s a horrible thing. I hate to think of them being trapped down there… You know, these [the hounds] are our life. They can go missing and if you can’t find it, you just can’t sleep.

But it’s hard to see this comment as anything other than a PR move in light of evidence about other hunts.

Wild animals are not the only ones suffering at the hands of hunts. Hounds, callously treated by hunt staff, are the ‘other victims‘. A Mirror piece exposed the shocking treatment meted out to hounds not seen as ‘productive’: clubbed, shot and “dashed against the kennel floor”. Hunt staff kill week-old puppies if they’re not good enough for hunting. And hunting hounds ‘lucky’ enough to join the pack are literally whipped into shape.

Estimates of the number of hounds killed each year vary. Pro-hunt lobby group the Countryside Alliance claimed in 1999 that 3,000 hounds were killed when they retired. More recent estimates by anti-hunting group Protect Our Wild Animals place the number around 7,000. But, as anti-hunt trespass group Hounds Off points out, these numbers only take into account the number killed because of old age. The real number, including hounds killed young or at birth, could be much higher.

When Oscar Wilde wrote that “each man kills the thing he loves”, he wasn’t talking about hunters and their hounds.

There have been other events that also cast serious doubt on hunts’ claims to care about their hounds.

One common occurrence is hounds let loose on busy roads, endangering both the animals and road users. West Midlands Hunt Saboteurs released footage from 24 November showing hounds all over a busy road. Just a few days earlier, the same group also witnessed hounds from the Warwickshire Hunt narrowly avoid being hit by a car. And in September, a master of Hursley Hambledon Hunt even signed a Community Resolution Order after breaching the Road Traffic Act. A video by Wildlife Witness shows a number of similar incidents throughout Devon during 2018.

Need I continue? This is just a selection of publicly reported incidents. And it doesn’t even touch other seriously worrying trends, including hunting through areas with bovine TB.

Hunts across the country seem to put their hounds in dangerous situations on a regular basis. Yet incidents like these shouldn’t happen if hunts, as they claim, are following a pre-laid trail. They’re not the actions of people that have care, compassion or respect for animals.

After four days without food, the trapped hounds were recovered by Cornwall Fire and Rescue Service. Five survived, though one is “seriously injured”. A sixth hound died. CornwallLive said that, after the news, Hancock described losing any animal as “deeply distressing”.

I won’t blame you, though, if you don’t entirely believe him.