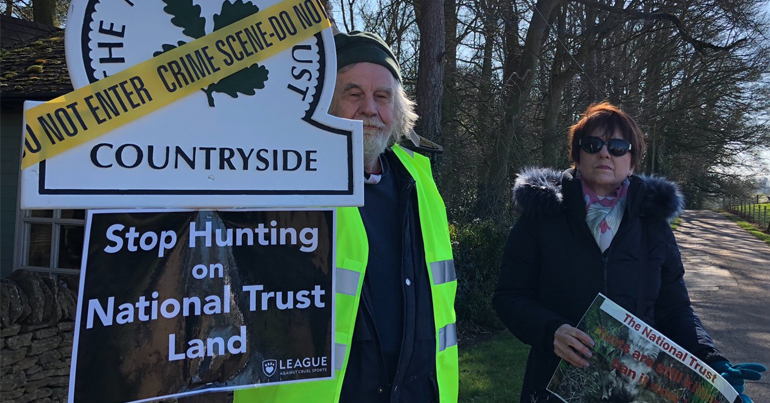 A group of anti-hunting organisations has appealed to the National Trust to reconsider its position on hunting. The letter says there are “concerns” over bovine TB (bTB) being spread by hunting hounds across the charity’s estates. But the National Trust has rejected the group’s calls.

On 1 September, a letter calling for the rejection of all hunting licence applications was submitted to National Trust director Hilary McGrady. Concerns that hunting hounds have helped spread bTB motivated the statement. It comes after it was revealed the Kimblewick Hounds, which received a hunting licence from the charity, killed 97 hounds following a bTB outbreak in December 2016.

The letter was signed by six anti-hunting organisations: Hunt Saboteurs Association, Cheshire Monitors, Keeptheban, Hounds Off, National Dis-Trust, and League Against Cruel Sports. And they ask the National Trust to reconsider its new hunt licensing system. The letter says:

The Trust has taken very welcome science-led steps in combating bTB, namely by prohibiting the badger cull and vaccinating badgers in some areas. We thank you for this. However, there are concerns over the role of hunts in the spreading of the disease over farms (including those that the National Trust owns)…

We understand the licence application period for hunts is ongoing until September 30th, and ask that to protect wildlife & the reputation of the National Trust, all applications are rejected and the policy of licensing hunts fully reconsidered.

Mentioned in the letter are a number of bTB outbreaks on National Trust land that also hosted hunts during the 2017/18 season.

Details of these outbreaks were provided to The Canary by National Dis-Trust. Area maps for National Trust licences were cross-referenced with the website ibTB, which displays bTB outbreaks using government data. The Canary independently went through the data and verified a number of coincidences.

They include the Old Berkshire Foxhounds, which was licensed on 27 October 2017 to hunt the Buscot & Coleshill Estate, Oxford. The area contains Step Farm on Lechlade Road, Faringdon, which recorded an outbreak on 7 October 2017. Another was the Monmouthshire Hunt, which was licensed in late 2017 to hunt the Sugar Loaf estate, Wales. A farm within the licensed area recorded a bTB outbreak on 7 June 2018.

Although these are outside of the National Trust’s licence area, they may fall within the total area covered by the hunt during its ride. This also applies to the 9 October 2017 licence for the Wiltshire and Infantry Beagles. The licensed Stourhead estate is just 1km from Home Farm, Mere, which recorded a bTB outbreak on 12 January 2018.

The National Trust responded to National Dis-Trust on 11 September saying hunts require the “express, written permission” of its tenant farmers before crossing their land. 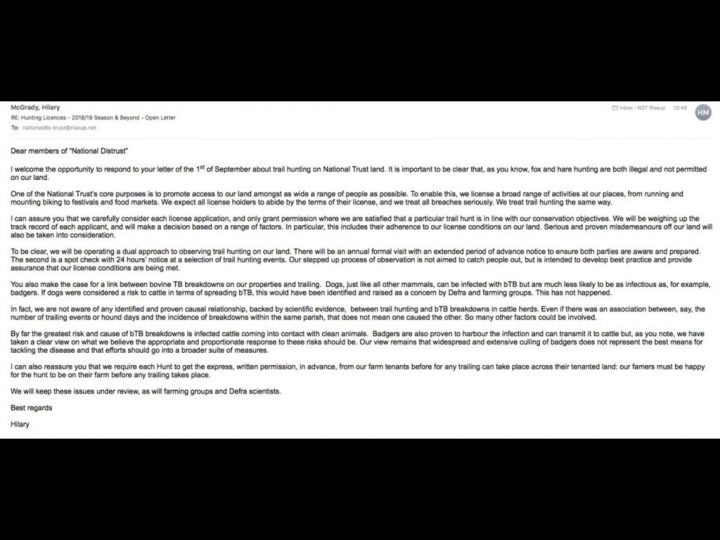 The Canary also approached the National Trust with the above evidence. In its response, included in the aforementioned letter, a spokesperson for the charity said:

Bovine TB is a complex disease and can be transmitted by a number of means. Dogs, just like all other mammals, can be infected with bTB but are much less likely to be as infectious as badgers. If dogs were considered a risk to cattle in terms of spreading bTB, this would have been identified and raised as a concern by Defra and farming groups. This has not happened.

We are not aware of any causal relationship between trail hunting and bTB breakdowns amongst cattle herds. Even if there was an association between, say, the number of trail hunt events or hound days and the incidence of breakdowns within the same parish that does not mean one caused the other. So many other factors could be involved. We will however keep this under review and, as always, be led by the evidence.

The reasons for the spread of bTB have become hotly contested. Badgers have largely been blamed by farming communities, leading to annual culls that saw nearly 20,000 badgers killed in 2017. But animal rights campaigners point to other possible vectors, including hunting hounds and intensive farming.

The National Trust response is the latest in the charity’s commitment to licensing hunts for legal trail hunting. But anti-hunting activists and campaigners have long claimed most hunts do not practice a legal form of hunting. As a result, they believe the National Trust is permitting an illegal activity. Fortunately, hunt monitors and saboteurs remain just as committed to protecting wildlife.

– Check out the Hunt Saboteurs Association for how to donate to or join your local hunt sab group.

– Read other articles by The Canary about the badger cull.