The Department for Work and Pensions (DWP) has released its latest figures on Universal Credit. But on the same day, a Labour MP issued a stark warning: that “evictions are inevitable” if Universal Credit is rolled out. And the DWP’s own figures make the Labour MP’s damning warning seem highly likely.

The DWP: “stuck in Victorian times”

On Tuesday 11 September, Labour MP for Liverpool Walton Dan Carden led a Westminster Hall parliamentary debate on the rollout of Universal Credit. The controversial benefit, which replaces six existing benefits, has repeatedly come under fire from campaigners, trade unions and others. But the DWP is carrying on with its rollout regardless.

As Carden noted, and as The Canary has previously reported:

Despite all the warnings, Universal Credit is to be rolled out in Liverpool this autumn – a policy so flawed it is plunging claimants into debt, arrears, and foodbank reliance. I called today's debate to tell the Government: #StopAndFix UC to prevent more hardship. pic.twitter.com/mwBSzLwY2o

He went on to criticise Universal Credit and the DWP more broadly.

But Carden made one telling point. He said:

He also said that letting agents in Liverpool are:

at the point of refusing Universal Credit claimants altogether.

And as Carden told the Liverpool Echo:

Local landlords are saying… that evictions are inevitable if this roll-out goes ahead – exacerbating what is already a national scandal.

As The Canary previously reported, one housing association issued a damning assessment of Universal Credit. It said that:

But the DWP figures released on the same day as Carden’s debate suggest it must know that arrears and evictions could well be a consequence of Universal Credit. Because to date [pdf, p8], the DWP is making the majority of payments for housing costs directly to claimants; 94% in the case of the private rented sector: 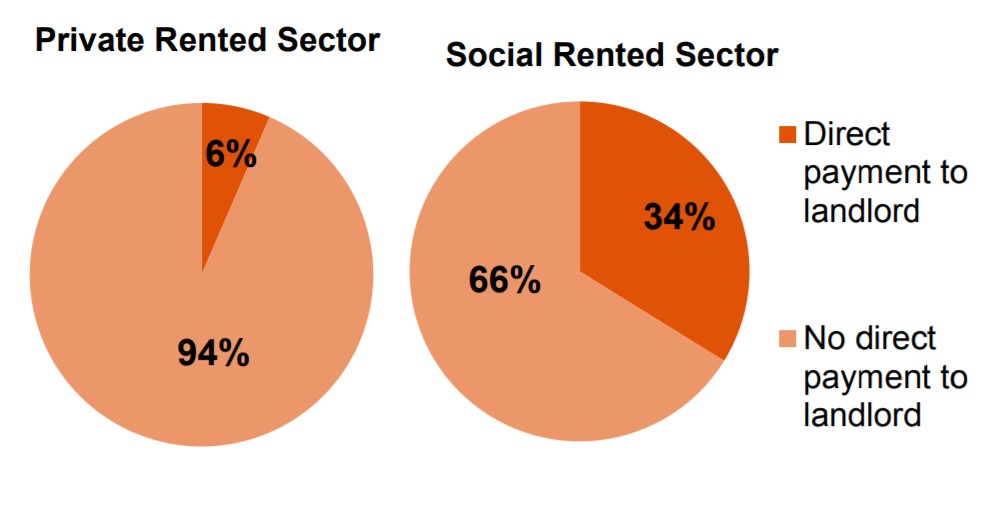 So why is this set up causing arrears and evictions? Carden summed the situation up. He said:

Other problems include payment as a single lump sum, including housing costs – causing households to choose between food or rent, especially at the outset of the claim.

And this is ultimately the problem. Universal Credit’s chaotic rollout, plus inadequate payments, are causing people to choose between eating and paying rent. The DWP must know this; its figures show the problem for everyone to see. Yet it continues with the rollout, regardless.

– Check out the #DWPcrimes, #ScrapUniversalCredit and #CrimesOfDWP hashtags on Twitter. Support the blogs Universal Credit Sufferer and The Poor Side of Life. Get involved with Disabled People Against Cuts (DPAC), fighting for disabled people’s rights.