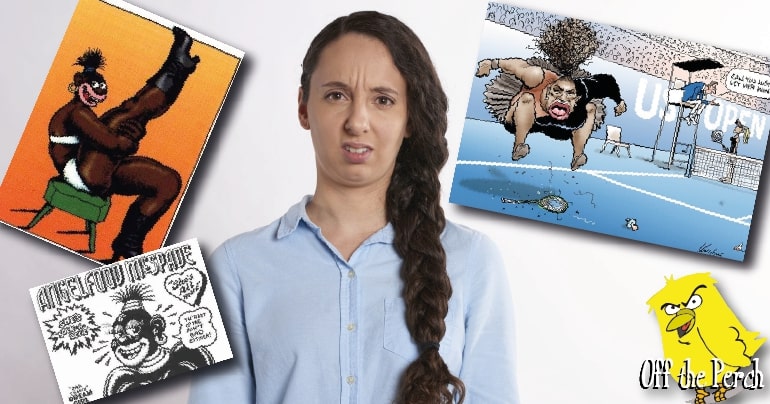 A cartoonist for News Corp’s Aussie tabloid the Herald Sun drew a racist cartoon of Serena Williams on 10 September. The reason it’s racist is because it uses tropes that were historically used by racists in racist cartoons – tropes like:

The cartoonist responded by saying:

You can’t expect me – a professional cartoonist – to know anything about the history of cartoons.

"It's a cartoon about poor behaviour. It's nothing to do with race."

The counter argument is that someone who works with things like symbolism, cartoons, and politics should know something – especially if they’re getting paid for their work. Not knowing is like trying to become a guitarist without learning about tuning. You could, but who would pay to listen to the hideous noise you produced?

The Herald Sun editor took the defence further, claiming that:

Before all this happened, we never even knew what racism was. It’s really not fair to expect us – as people in the information industry – to be widely informed.

It was explained that ‘no one is saying non-racist cartoons should be banned – primarily because they’re not racist’. The editor shouted in response:

You said ‘non-racist cartoons should be banned’ – I’m printing that!

The Herald Sun is owned by Rupert Murdoch’s News Corp. A spokesperson from the evil news conglomerate claimed:

You can’t expect us – as the people who own Fox News and The Sun – to know what is or isn’t racist. It’s not like we get people contacting us on a daily basis to shout ‘THIS IS RACIST – WHY DO YOU KEEP PUTTING THIS SHIT OUT!?’. You’re really not being fair.

So yes – how could any of the numerous people involved in publishing this cartoon have known?