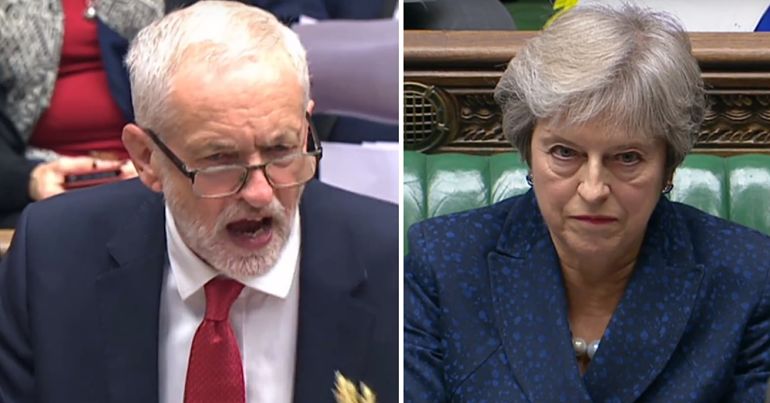 Clarification: This piece was updated at 18:10 on 12 September to make clear that Conservative MPs jeered during Corbyn’s speech, and Labour MPs cheered at the end.

Watch Jeremy Corbyn bring the house down with a stunning attack on Theresa May’s “failing” government:

“Pouring petrol on the crisis”

During Prime Minister’s Questions (PMQs), Corbyn unleashed a passionate attack on the May government’s legacy:

Everywhere you look Mr Speaker this government is failing. One million families using food banks, a million workers on zero hours contracts, four million children in poverty, wages lower today than 10 years ago and on top of that there’s the flawed and failing Universal Credit.

Conservative MPs jeered during his speech. He then declared, to howls of support, that:

The prime minister is not challenging the burning injustices in our society. She’s pouring petrol on the crisis.

Finally, Corbyn rounded off with a simple yet powerful question to an embattled looking May:

When will she stop inflicting misery on the people of this country?

On my God @jeremycorbyn just went in…. absolutely rocking!!
“Everywhere we look this Government is failing” #PMQs

Crikey Corbyn really went full throttle.
PM hanging her head in shame before getting up to answer a question she wasn't asked. #PMQs

And for many there was one clear winner:

From disabled people battling against welfare cuts to families forced to use food banks due to low wages, Corbyn’s rousing attack gave a voice to those oppressed by the government’s cruel policies:

If you're on the receiving end of the govt's welfare policies, universal credit, sanctions, huge cuts etc, you KNOW the truth, you know the reality. We are people, not statistics. #PMQs

Three years ago today, Labour members elected Corbyn as the party’s leader to oppose Tory austerity and bring about a fairer society. After a summer of smears, this speech demonstrated that there’s still only one man for the top job.