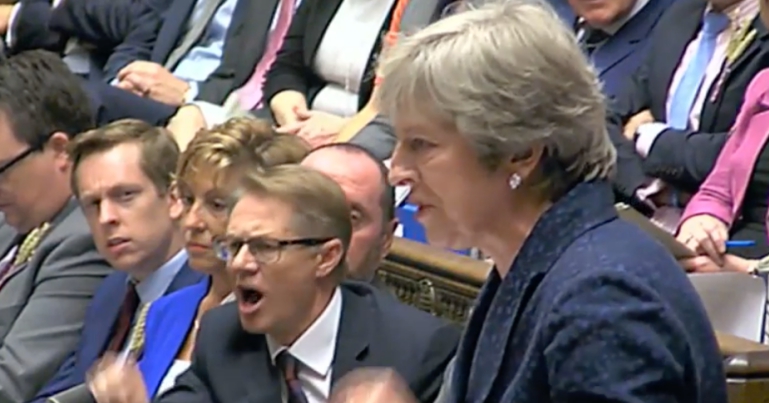 At Prime Ministers Questions (PMQs) on 12 September, Theresa May was challenged over her government’s flagship welfare reform, Universal Credit. Her response was shameful. But perhaps even more shameful was the response of Conservative MPs to the suffering the benefit has caused.

Jeremy Corbyn asked several questions about Universal Credit. He also set out exactly why the benefit is causing so much harm for people across the country. Possibly the most controversial of all the Department for Work and Pensions (DWP) reform, report after report, and even the department’s own figures have shown why there are so many problems with it.

But instead of listening to Corbyn’s question, Conservative MPs jeered as he stated the misery people are facing. Several Labour MPs called out their behaviour:

Screaming, shouting and trying to silence criticism doesn’t change the fact that Universal Credit is failing families across the country with child poverty rising #Disgraceful

Tory MPs trying to shout down @jeremycorbyn at #PMQS is not a good sight. l suppose all they have left is to shout and guffaw as they are bankrupt of ideas in their own party ?

Tories laughing at the damage they are inflicting on people through their appalling botched Universal Credit system. #heartless #PMQs

And other commentators were equally disgusted:

How edifying it is to see Tory MPs screaming and braying at the leader of the opposition to prevent him from doing his job. Soon they’ll be back on here tweeting about how the ‘hard left’ is threatening civility in public discourse. #PMQs

This kind of behaviour only does more to bring politics into disrepute – 10-year-olds would be embarrassed by it #PMQs #brokenpolitics https://t.co/5Iagay1ZkZ

Although devoid of animal noises, May’s response wasn’t much better. As if it somehow mitigated the horrific experiences of hundreds of people affected by the benefit, she reeled off three stories of people who benefited from their experience with a Universal Credit work coach.

May also claimed that “We are helping get people into work”. Although many people pointed out the flaw with that argument:

Nearly 8 million people in poverty are in work. Does the Prime Minister have any idea what she’s talking about? #PMQs

As the Green Party’s Natalie Bennett pointed out, the behaviour of Conservative MPs would embarrass a 10-year-old. This behaviour would be bad enough on any issue. But MPs behaving like this when confronted with the misery and despair its policies have caused is unforgivable. It is callous and disgusting and should play no part in political discourse.