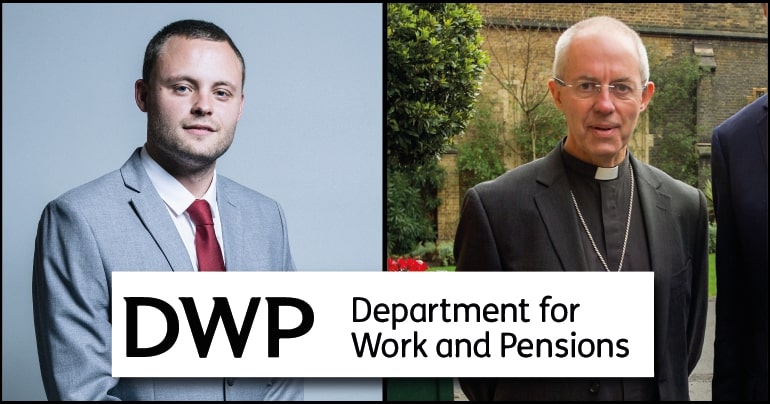 Justin Welby, the Archbishop of Canterbury, has called for the rollout of Universal Credit to be halted. He’s far from the first person to do so. The Department for Work and Pensions policy has been disastrous. And yet, despite the obvious failure of the scheme, one Tory MP feels that what’s ‘inappropriate’ is Welby speaking up for the DWP’s victims:

This is the Tory mindset in a nutshell.

Welby was speaking to the Trades Union Congress (TUC) conference in Manchester. He said of Universal Credit:

It was supposed to make it simpler and more efficient. It has not done that. It has left too many people worse off, putting them at risk of hunger, debt, rent arrears and food banks.

When universal credit comes into a local area, the number of people going to food banks goes up. What is clear is if they cannot get it right, they need to stop rolling it out.

The archbishop isn’t just making this up. In September 2017, the Trussell Trust, which operates 400+ UK food banks warned the government to halt the Universal Credit rollout. It said that not doing so would “leave our network of foodbanks struggling to cope”.

The policy has created several other problems. It’s led to many recipients under falling into rent arrears – creating an increased risk of evictions. Figures have also shown the DWP is making problems for people by deducting their money. The policy has even been linked to an increase in crime.

Bearing in mind the problems thrown up by Universal Credit, it’s not difficult to see why Welby – or anyone – would criticise it. As Bradley didn’t get it, several Twitter users were happy to clue him in:

Others speculated whether the tweet would help Bradley have a moment of epiphany: 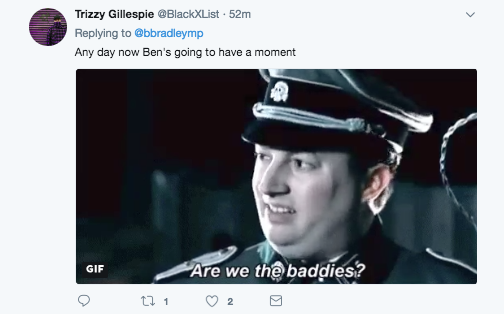 If Bradley hasn’t wised up by now, it’s unlikely he ever will. The MP for Mansfield became notorious for claiming that: 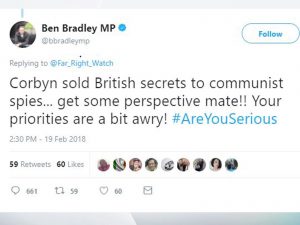 Under threat of legal action, he was forced to make a grovelling apology:

As of 6 March, it had been shared more than every other Tory tweet of 2018 combined. Bradley also tweeted this, which may be one of the most ignorant statements ever made by a British politician:

To all those arguing that the possibility of an economic impact means we should have a second referendum… the single biggest threat to our economy is a Labour government, so if they ever win an election I assume you’ll be happy to have a re-run?

Most responses were variations of this:

We have a re-run of elections every few years. That’s quite literally how parliamentary democracy works.

How did someone this stupid become an MP. https://t.co/v9PkHySlac

Driving marginalised people to food banks, crime and desperation really shouldn’t be a party political issue. The fact that Bradley says otherwise shows that he really doesn’t understand the problem. That or he simply doesn’t care.