On the same day May called Labour 'institutionally racist', the Tories got in bed with Europe's antisemitic far right - Canary Workers’ Co-op 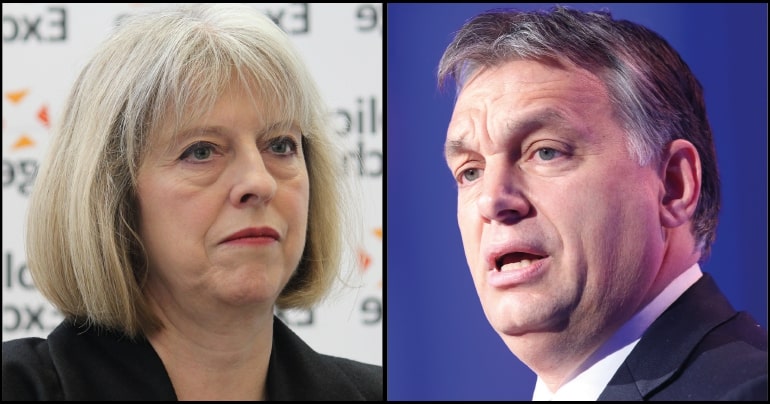 On 12 September, Theresa May described Labour as ‘institutionally racist’ in a tweet. On the same day, her party voted in favour of sparing the Hungarian prime minister – who’s been accused of Islamophobia and antisemitism – of censure by the EU. The hypocrisy has not gone unnoticed.

At Prime Minister’s Questions, May said:

what have we seen from Labour over the past few days? Iranian State TV broadcasting no-confidence votes against Labour MPs. Police investigating anonymous and threatening letters about the de-selection of Labour MPs sent to Labour offices. And most shamefully of all: The Labour MP Chuka Umunna saying that the Labour Party is now an ‘institutionally racist party’. That’s what he’s done to Labour, just think what he’d do to this country.

All of these points have been criticised elsewhere. May later made the bold claim that she’s ‘tackling injustice and racism’ and that Corbyn is ‘creating an institutionally racist party’:

Later that day, her party sank to an all-new low.

On 12 September, there was a vote in the European Parliament to censure Viktor Orbán, the Hungarian prime minister. Orbán has been accused of promoting antisemitism, Islamophobia, undermining judicial independence, and curtailing press freedom. The censure motion could eventually lead to Hungary losing its right to vote in the Council of the European Union, but it’s a slow process the EU may not have the stomach for.

Despite the unlikelihood of serious consequences for Hungary, the Conservative MEPs weren’t even willing to pretend they cared. A two-thirds majority voted to begin Article 7 – the process of potentially stripping Hungary of voting rights. Conservative MEPs and Nigel Farage voted against it:

He wasn't alone. 15 Tory MEPs voted against a motion in the European Parliament, joining Nigel Farage in defiance of the overwhelming majority (including Labour). 2 Tories abstained (one was their human rights spokesman). 0 voted in favour. Happily the motion passed 448 to 197.>

The move has drawn criticism in the UK:

The Tories just voted against taking action against Hungary's racist, anti-Semitic, dictatorial regime. How is that not a national scandal? https://t.co/A1XX4O5Yjr

Shameful that Tory MEPs supported Viktor Orban’s far-right regime. It is unacceptable for @theresa_may to say she was not consulted. As party leader she must condemn their actions.https://t.co/WzQByTS80f

This is a new low, even for Theresa May's Conservative Party.

By voting to support Orban as he trashes press freedom and judicial independence, the Tories stand with Trump, Farage, Le Pen, Bannon, and all those who disdain the fundamental values of social & liberal democracy. https://t.co/RgEXJlhLv4

Is Theresa May going to call out those Tory MEPs, who were whipped to vote to support Viktor Orban against a censure motion for his attacks on refugees and his antisemitism & Islamophobia? If not, I wouldn’t advise her to lecture anyone on racism again. https://t.co/rCs1dA9s1m

— Board of Deputies of British Jews (@BoardofDeputies) September 13, 2018

The Conservatives have form when it comes to supporting Orbán, though:

Viktor Orban – The man who vowed to protect his nation from the “rust” of Muslim migrants, describes immigration as poison, uses anti Semitic language, yes Boris, we can see ourselves working with such a man – seriously what is happening to the Conservative party? https://t.co/Qam1EPsmDv

The Independent wrote that May’s:

spokespeople attempted to distance the prime minister from the move by claiming on Wednesday afternoon that she had not been consulted in advance how her MEPs would vote.

This is on the same day that May tried to insinuate Corbyn was responsible for:

anonymous and threatening letters about the de-selection of Labour MPs

In pursuit of faux outrage to attack the left, and to bolster their own relevance, this constant overreach is costing the wreckers any credibility they once had. Someone sent you a Thomas the Tank Engine toy and a card with “choo-choo” on it. Grow up, stop wasting police time https://t.co/MRpC5pPawW

This is the double standard. Corbyn is at fault for anything the Tories don’t like; the PM isn’t even responsible for the actions of her own party.

People have questioned why the Tories would support such an obviously authoritarian leader. The obvious answer seems to be Brexit, and the UK has also been receiving support from Italy’s far-right deputy prime minister Matteo Salvini. Despite this vote, the idea that Hungary will break ranks with the EU on Brexit may be more fantastical thinking on the UK’s part.

This isn’t the only potential answer to why the Tories would support Orbán, though. Maybe they actually just support him.

Whatever the reason, our cosying up with far-right nationalists throws cold water on the idea of a “truly global Britain” after Brexit.