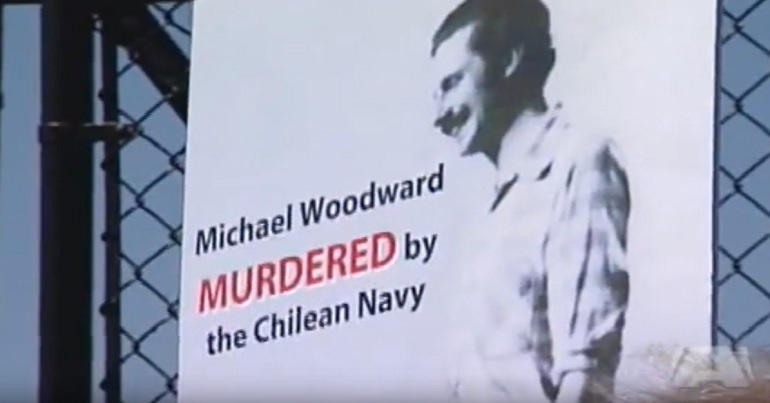 This week marks the 45th anniversary of the US-backed Chile military coup. On 11 September 1973, socialist President Allende was killed and the country seized by General Pinochet who orchestrated a bloody rampage to purge the country of Allende supporters.

It has been described as a “bloodbath“. Left-wing sympathisers and government officials were rounded up in the thousands and imprisoned in detention centres, including the National football stadium where folk legend Victor Jara was assassinated. They were then tortured or murdered.

Among those detained during the coup was British priest Father Michael Woodward. He was imprisoned by the Chilean Navy, accused of being a terrorist, tortured to death and his body discarded.

Although 45 years have passed, his family are still searching for his body amid a climate of intimidation, threats and secrecy.

The case of Father Woodward

Father Michael Woodward was born in 1932. He attended Downside Abbey in Somerset and was ordained in 1961 before travelling to Chile to work in its shantytowns. During the coup, he was arrested, taken to local police headquarters and savagely beaten. He was later transferred to Naval vessels ‘La Esmeralda‘ and ‘Lebu’ for further violent interrogations. By the time he was admitted to the naval hospital, he was already dead. His body then ‘went missing’ and has not been found to this day.

Patricia Bennetts, 80, is Father Woodward’s sister. She has campaigned tirelessly for answers about what happened to her brother. She told The Canary:

This is the case of a forced disappearance. Michael was tortured to death by the Chilean Navy. The case is still open in the hope that concrete evidence be found to condemn those retired naval authorities who were responsible for torture and detention.

Regarding the search for my brother’s body, leads and clues have been followed with no success. A last dig in the cemetery of Playa Ancha June 2018 was not conclusive. Antecedents requested by the judiciary have not come forth. There is no willingness to cooperate resulting in an obstruction of justice.

I would like the Navy to speak the truth about its unlawful crimes against its own citizens. and in the case of my brother, to reveal how they disposed of his body.

Father Michael is just one of around 4,000 people, including children, who were ‘disappeared’ by Pinochet’s secret police and have yet to be found. There have been no state efforts to locate the missing to date. The military has stubbornly held its pact of silence.

In this challenging climate, relatives of the missing have been forced to organise themselves in order to follow leads about their ‘missing’.

Javier Rodriguez from Valparaiso is one of the ‘Amigos de Miguel Woodward‘ a voluntary group formed to establish the truth about what happened to Michael. Earlier this year they excavated a site to find Michael and other missing people from Playa Ancha. He told The Canary:

Michael was a close friend of my family. We lived on the same road. We were the last people to see him alive. The Chilean Navy have refused to cooperate with this and other cases of forced disappearances. Throughout this 45-year quest to find Michael we have supported Pat and Fred’s struggle to get answers.

We will continue to pressurize the Navy to tell us what they did with the missing and apologise to the nation for their crimes. We will continue to honor and remember Michael and other victims of the Navy until we locate them. Our pact is with truth and justice.

The prospects for the families of Pinochet’s victims under current ultra right-wing President Pinera are bleak. Last month his administration caused widespread outrage when seven convicted torturers were released despite not fulfilling bail conditions. Another was given a state pardon.

The Canary contacted the Chilean Ambassador in London, Mr David Gallagher, for a comment about Father Michael’s continued disappearance and whether any efforts are being made to find him. He responded: “No comment”.

With the direct complicity of the current government, torturers are free from prison while official sources attempt to re-write historical wrongdoing in order to institutionalise the injustices of the Pinochet Regime, while the 4,000 victims murdered in the aftermath of the coup remain ‘Missing‘.