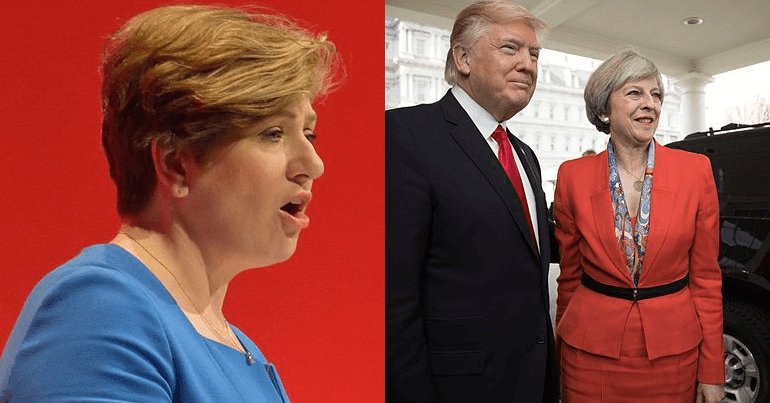 In the Commons, Thornberry argued that Trump is poised to “commit to a strategy of regime change in Syria” adding that would be a “gravely serious step for the UK to take part in”.

In response, Conservative minister for the Middle East Alistair Burt made clear that the government was prepared to attack Syria without parliamentary approval again, in the event of an unverified chemical attack.

Trump’s national security advisor John Bolton recently aired publicly that both the UK and France have agreed to a “much stronger” response if there’s another chemical attack in Syria. And that may well happen. The Syrian government is preparing to launch an offensive against Idlib, the last major rebel-held enclave. U.N. Syria envoy Staffan de Mistura has warned about possible chemical weapons attacks from both the Syrian government and terrorist opposition groups like al-Nusra. The U.N. has also warned about a looming humanitarian crisis as portions of the area’s 2 million population are displaced and caught in the warfare.

In April 2018, another chemical attack happened in Douma. Thornberry pointed out that the Conservative government bombed Syria in response “without seeking the approval of the House and without waiting for independent verification of those reports from the OPCW” (the Organisation for the Prohibition of Chemical Weapons).

With that precedent in mind, the MP for Islington South and Finsbury asked the government for two assurances:

First, will he assure us that if there are any reports of chemical weapons attacks… the Government will not take part in any military action in response until the OPCW has visited those sites… independently verified those reports and attributed responsibility for any chemical weapons used? Relying on so-called open source intelligence provided by proscribed terrorist groups is not an acceptable alternative.

Secondly, if the Government intend to take such action, thus escalating Britain’s military involvement in Syria and risking clashes with Russian and Iranian forces, will the Minister of State guarantee the House that we will be given a vote to approve such action before it takes place, even if that means recalling Parliament?

“The humanitarian motive is limited”

In response, Conservative minister Burt claimed that the airstrikes were “not about intervening in a civil war or regime change” but only to “deter” the use of chemical weapons “in order to alleviate humanitarian suffering”.

It’s worth bearing in mind that comes from a party that has supported wars in Libya and Iraq for resources and power, under the guise of humanitarian aid. Hilary Clinton’s leaked emails offer an insight into this. Her closest advisor, Sidney Blumenthal, stated that there were no real moral reasons to continue the war in Libya seven months before it ended:

The humanitarian motive offered is limited, conditional and refers to a specific past situation.

The Conservative Party joined those wars and hasn’t had a change of direction since: it’s currently helping the Saudi-led coalition desecrate Yemen, where famine threatens millions.

In the Commons, Burt then refused to give any assurances about military action in Syria:

I am not prepared to say at this stage what the United Kingdom’s detailed reaction might be or to give any timescale, because the importance of responding appropriately, quickly and with the safety of personnel in mind will be uppermost in the mind of the United Kingdom.

In other words, the Conservative government appears prepared to follow Trump towards war in Syria, on the basis of no independent verification, and without parliamentary approval.

With Trump’s approval ratings low and the UK establishment facing an existential threat in Jeremy Corbyn, the push for war seems all the more likely. War and foreign threats can encourage citizens to rally around authority (known as the ‘rally effect‘).

We must resist a dangerous escalation that could lead to clashes between NATO and Russia. That’s an existential threat to humanity.

Here @EmilyThornberry dismantles the Tories for following Trump towards war in Syria. Things are heating up as the Syrian government prepares for an offensive against the final major rebel-held enclave Idlib. https://t.co/N2WV6xuLxu

– See other Canary articles on Syria.