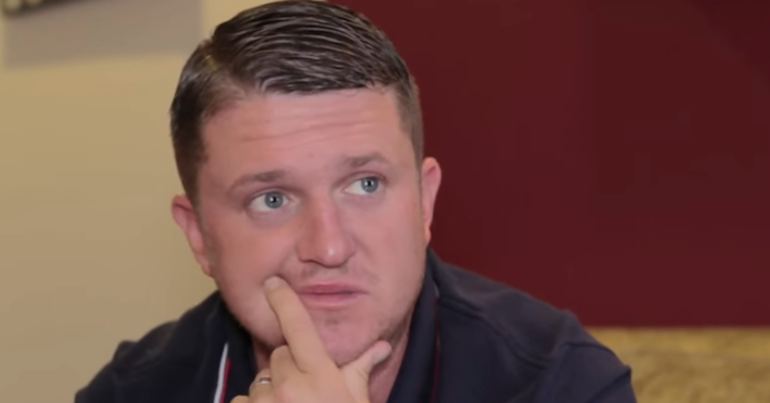 McIntyre said he axed the motion because only two UKIP members had proposed it, not a full branch. This is apparently in “contravention of the Party Rule Book”.

In a statement to UKIP members, McIntyre wrote:

I have made it a point during my tenure as Chairman of the Party to adhere strictly to the Party Rules, as they are the backbone of the Party.

I believe strongly in freedom of speech and would suggest that this motion is presented to the next Autumn Party Conference via the correct channels.

I take full responsibility for this error in judgement as it is mine and mine alone.

It looks like for now, UKIP’s NEC has thrown Yaxley-Lennon under the bus and dashed his hopes of joining a large political party.

But there are still calls among the party’s ultra-right to get around McIntyre’s most recent ruling. They’ll try to argue that they put forward the proposal for Yaxley-Lennon’s membership as an ‘Emergency Motion’.

Deputy chair of UKIP’s youth wing Reece Coombes is one of those UKIP members. He seconded the proposal put forward by UKIP’s family and children spokesperson Alan Craig. Coombes often writes in defence of Yaxley-Lennon for the party’s blog Kipper Central, where he enjoys referring to himself in the third person.

According to Coombes, the party’s rulebook allows members to submit emergency motions for discussion at the party conference after the regular deadline. And individuals, not just branches, can make such proposals.

It is puzzling that party chairman Tony McIntyre has cancelled the conference debate on the ‘Tommy Robinson’ motion having only just approved it on Sunday, as nothing procedurally or otherwise has changed.

Reece Coombes and I submitted the motion on 31st August (a) as individuals, and (b) significantly after the deadline for branch motions. It was plain to see on both counts, therefore, that our motion did not qualify as a normal branch motion and we did not submit it as such…

On Sunday he rightly approved the motion. He has today unapproved it. What caused him to change his mind?

The answer is UKIP infighting.

After Craig announced he’d submitted the motion to the NEC on September 6, an unnamed UKIP spokesperson quickly called the statement “sensationalist fake news” and said there was no chance of it passing. Then the NEC passed it. And then redacted it.

In fact, several senior UKIP members, including former leader Nigel Farage, have raised concerns over bringing Yaxley-Lennon into the party, with NEC member Ben Walker saying he would have to “consider [his] position”. UKIP’s Bristol branch went so far as to state that it would disband if the party accepted the Islamophobe.

But the main reason for keeping Yaxley-Lennon at arms’ length isn’t about morality. It has more to do with tactics and shoring up the Eurosceptic vote.

Shoring up the Brexit vote

In an LBC segment on September 10, Farage highlighted a recent statement made by former Brexit minister Steve Baker. Apparently, some 80 Tory MPs could vote down Theresa May’s Chequers plan in parliament, with Baker predicting a “catastrophic split” amongst the Conservatives.

Pointing to infighting within Labour, Farage said that instead of focusing on Yaxley-Lennon’s membership, UKIP should be trying to lure dissatisfied Brexit voters back to the party:

On Brexit, the one party that should be benefitting hugely from this, should be UKIP.

It should be picking up Tory voters and Labour voters.

But instead, they are going to have a debate as to whether Tommy Robinson should be allowed to join UKIP.

I think UKIP are missing a bit of a trick here. There are millions of very unhappy Euro-sceptic voters out there in both parties!

The ongoing saga of UKIP’s flip-flop on Yaxley-Lennon is leading to some spectacular self-owns. And for many, it will be a delight to see the allies of the English Defence League founder damage his reputation.

It looks like UKIP has decided – in the short-term – to drop populist Islamophobia and shore up the anti-immigration Brexit vote. This may mean that UKIP ‘moderates’ have put the brakes on the party’s transformation into a National Front for the 21st Century.

But don’t get complacent. While it might make tactical sense for UKIP to focus on Brexit right now, Gerard Batten and his ultra-right allies are still in charge of the party.

And if that remains the case, Yaxley-Lennon’s membership in UKIP is not so much a matter of ‘if’, but a question of ‘when’. And that should worry us all.