As this Tory MP goes on a poverty tour, it’s clear she still doesn’t get it - Canary 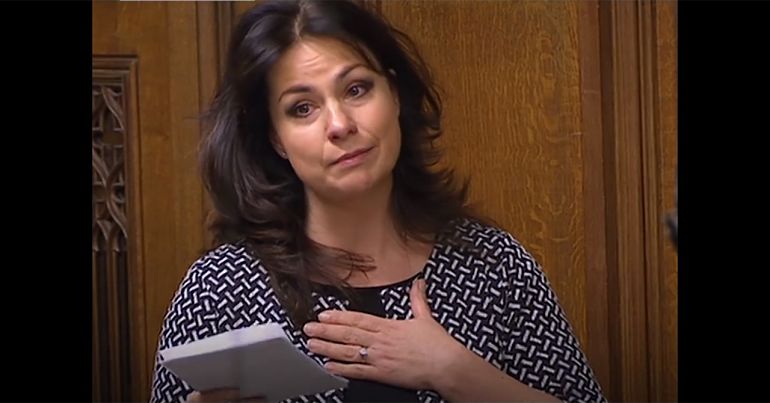 The cautionary tales of Hilaire Belloc speak of a young lord who failed at politics because he was “far too freely moved to tears”. A century later, the same could not be said of the notably damp-of-eye Conservative MP, Heidi Allen. But the cause of Allen’s emotional wobbles is not sharp remarks from other members. Rather, it seems to be tales of the reality of life under Tory austerity that really set her off.

‘Allen welled up as she recounted stories of foodbank users’, or something similar, seems to be on the clipboard of every journalist. The MP for highly affluent South Cambridgeshire is a Ctrl+V away from being the daily Voice of Concern. And now she’s embarking on a tour of the nation’s poor places, alongside independent MP Frank Field, formerly of Labour. Together they want to “blow the lid off” UK poverty and “show the government this exists”. Expect tears.

I’m not saying she doesn’t mean it. The harsh realities that turn her taps on are genuinely moving and shocking. We should question the soul of anyone who doesn’t react with raw emotion.

But I do think she’s a monumentally long way from actually understanding the problem. And therefore, is she really the right person to be trying to address it?

Seeing half the problem

Allen is very good at noticing the symptoms of hardship. It’s good that she speaks about such things. But she’s much less good at identifying the causes. The poverty and destitution she describes isn’t something that’s just fallen out of the sky. It’s not the result of a bad harvest or angry gods. It’s the logical result of nearly nine years of Tory-led austerity. George Osborne’s scorched earth approach to public spending. Iain Duncan Smith’s cultural revolution in turning the DWP from a body designed to help to one hell-bent on cutting payouts. Theresa May’s all-encompassing hostile environment. These things have consequences. And those consequences make Heidi Allen cry.

It would be a little unfair to hold Allen responsible for decisions taken before she entered parliament in 2015. But it’s certainly fair to ask why, after five years of the calamitous coalition, anyone with a heart would be standing on a Tory ticket. Allen made a conscious decision to ally herself with the likes of Duncan Smith.

Once in her seat, there were signs that Allen might seek to ‘reform from within’, as the saying goes. Her maiden speech railed against Osborne’s cuts to tax credits. Did the Tories have a rebel in their midst? No. When the vote came, she sided with the government. She didn’t want to NOT cut tax credits, it seemed. Just do it a bit more quietly and carefully. There was a definite sense that it was ‘how it would come across’ that was her main concern. Not the fact that cutting tax credits would punish exactly the kind of working but not wealthy people the Tories laughably pretend to care about.

This voting pattern has continued. Allen has “generally voted” to reduce benefit spending. What does she think will happen? That somehow she’s ‘making work pay’? Her votes have helped make people poorer whether they’re out of work or in work. Ash Sarkar is exactly right to say that Allen has got no grounds for “acting surprised”.

Allen seems to think that her poverty tour will uncover a previously ‘unseen’ Britain. Newsflash: we could already see it. Some of us are staring it in the face. Some of us are in it. Many of us warned about this sort of thing happening if the modern Conservative Party of David Cameron, Osborne and May was allowed into power in 2010. Few of us predicted the full scale of the damage to people’s lives.

But Allen apparently fails to appreciate the size of the problem. On the first day of her tour, she sought to comfort a foodbank user. “You must feel like the world is spiralling around you”, she empathised. “It’s two steps forward and one and a half back”. And that’s false Tory optimism in a nutshell. ‘Yes, we know it’s hard, but keep trying and you’ll gradually inch forward’. The system is broken. The country is broken. The defining pattern of Tory Britain has, at best, been ‘one step forward, two steps back’.

Heidi Allen, if you want to do something useful, you’ll acknowledge your role in getting us to this point. You’ll start voting against every evil policy of this wretched government. Maybe you’ll leave the Conservative Party. I really don’t care. Just start helping the real work of mending the country. Today.