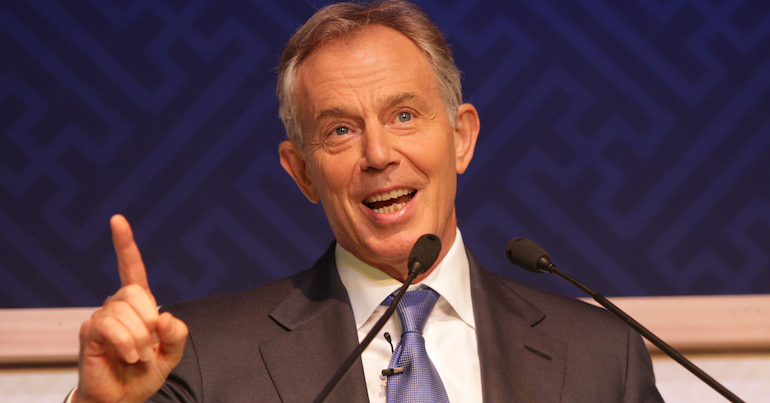 On 26 February, former prime minister Tony Blair issued a scathing attack on the Labour Party and Jeremy Corbyn. He also offered his full support to the newly formed Independent Group. But Blair’s words could come back to bite him. Because by endorsing non-Labour MPs, he’s potentially in breach of a key Labour rule. Now, thousands of people think there may be grounds to expel Blair from Labour.

“Embrace the spirit of insurgency”

As the Independent reported, Blair:

declared the Labour Party he once led is “in thrall” to left-wing populists… Blair… said its current state is now “truly mind-boggling”, bedevilled by antisemitism and characterised by its “savage denunciation” of anyone who speaks against it.

In contrast, he cited the breakaway group of ex-Labour MPs as part of a “fightback”, calling on other supporters of moderate politics to “embrace the spirit of insurgency”, adding “the struggle can be won”.

In response, many people feel that his support for the Independent Group’s “insurgency” could be grounds to expel Blair from the Labour Party.

Activist Liam Young has pushed for an investigation:

I’ve written to the Labour Party to ask them to check if the remarks by this Party member breaks our rules. If so – he should be suspended like any other of us would be. The problem with the elite is that they don’t think the rules apply to them. They do. https://t.co/6u4d9HXgpE

And many people have asked the same question:

@JennieGenSec As a labour Member could you please inform us as to your actions to be taken re Tony Blair endorsing another Political Organisation .

The Labour rule book states quite clearly that:

A member of the Party who joins and / or supports a political organisation other than an official Labour group or other unit of the Party, or supports any candidate who stands against an official Labour candidate, or publicly declares their intent to stand against a Labour candidate, shall automatically be ineligible to be or remain a Party member, subject to the provisions… of the disciplinary rules.

The petition also asks Formby to take disciplinary action against Peter Mandelson, who “stated publicly that he ‘works every day to undermine Jeremy Corbyn'”.

These are the same rules that were used to expel thousands of Labour members who joined to back Corbyn’s leadership bid in 2015 and again when he was challenged in 2016. The often vague reasons given for punishing members included simply retweeting Green MP Caroline Lucas.

Blair’s comments show arrogance on so many levels. For a start, he seems to think he’s immune to basic Labour rules.

But equally, has he still not ‘got it’ that Labour membership ‘surged‘ under Corbyn, in direct opposition to Blair’s New Labour? Because, let’s not forget, when asked about her greatest achievement, Margaret Thatcher replied: “Tony Blair and New Labour”. So, yes, when he moaned that the word “centrist” has become an insult, he’s spot on.

And more than this, people can’t and won’t ever forget that Blair also ‘led’ the UK’s invasion of Iraq. The war killed hundreds of thousands of people, and the Chilcot inquiry concluded it was unnecessary. Both the US and the UK knew it could lead to a rise in terrorism – as it did. This is the same man that many think should be prosecuted as a war criminal.