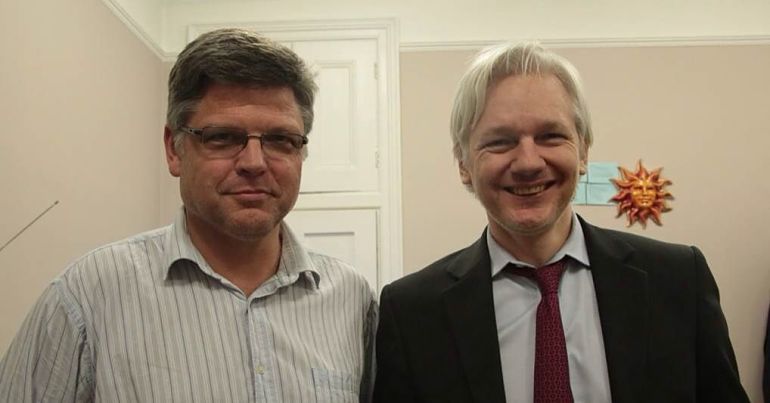 This article was written for The Canary by Australian barrister Greg Barns, a long-time legal adviser to Julian Assange. Barns is known for his work in human rights, particularly concerning the plight of refugees and asylum seekers illegally incarcerated by Australia offshore.

It is often forgotten that WikiLeaks founder Julian Assange is an Australian citizen, who had his passport renewed late last year by then foreign minister Julie Bishop. Both his mother and father live in Australia.

But because he’s a citizen of Australia, this means Canberra has an obligation to ensure he is not subject to what is demonstrably a political witch hunt and a threat to freedom of speech and of the media.

The US pursuit of Assange is a deliberate and obsessive attempt by Washington to seek revenge for the 2010 publication of information which it did not want the world to see and read. It was about the truth regarding its wars in Afghanistan and Iraq. The implications of the pursuit of Assange for journalists, media organisations and whistleblowers is profound and dangerous.

To put it another way, if Assange was pursued by China for publication of material about that nation’s military adventures, we would expect Australian prime minister Scott Morrison to do everything he could to protect Assange from Beijing’s reach. The same would go for Russia.

Media but not political interest

Assange’s arrest and the US extradition request are front-page news in Australia. And it is not just the ‘high brow’ media covering this, but talk shows and commercial television. And it is a talking point in the living rooms of Australia.

Moreover, there has been vigorous debate over the past few days about the plight of Assange and the issue of freedom of speech. And while no polling has been published, it is not unreasonable to suggest that the majority of Australians would expect their government to step in and allow Assange to come back to Australia, to be with his family, or at least not extradited to the US, where gross injustice and cruelty will be the order of the day.

Both Morrison and opposition leader Bill Shorten were asked about Assange’s plight. Australia is in the middle of an election campaign with Shorten and his Australian Labor Party (ALP) expected to be elected to office on 18 May. Both men trotted out the standard lines used when an Australian gets into trouble overseas; that is, that Assange would get consular support, but no special treatment.

Shorten came under pressure about this at a public meeting in Sydney and said his staff would meet with Assange’s lawyers. But at the time of writing, there has been no word from his office about such a meeting.

There is a sense among Australians that, when one of its citizens gets into serious trouble overseas, the government should protect them. While it is not a legal obligation, it is a moral imperative. Indeed, Australia must do more to protect Assange. Australia is one of the most loyal US allies and arguably has considerable sway in Washington.

There is also a precedent in the case of David Hicks. In 2001, Hicks – who had converted to Islam – was captured by the US in Afghanistan. He was transported to Guantánamo Bay. The Australian government, led by conservative prime minister John Howard, was happy to ‘let Hicks rot’, to coin a phrase. But mounting pressure and a relentless campaign by his family saw Howard backflip, and Hicks was returned home in 2007.

There have also been occasions when Australian governments worked the diplomatic channels to protect its citizens from harsh treatment and threat of death in south-east Asian countries.

So far in the Assange case, Australia has been able to get away with taking a back seat. But now that the UK government has made it clear it is happy to be the lapdog to Washington, Australia needs to step up – to look after one of its own.

And there needs to be international pressure put on Morrison and Shorten to take the sort of stand that UK Labour leader Jeremy Corbyn has taken about Assange; that is, to oppose the extradition of a person who is criminalised for merely exercising their right to freedom of speech.

All it would take for Morrison and Shorten is to talk with UK prime minister Theresa May and US president Donald Trump.

It is said that WikiLeaks, with the assistance of brave whistleblower Chelsea Manning, revealed the full horror of the US and its allies in the obscene wars they started in Iraq and Afghanistan.

These revelations included video footage that showed a 2007 attack in Baghdad by a US Apache helicopter that killed a Reuters news photographer, his driver, and a number of other civilians:

Material released showed that in the Iraq war alone there were more than 109,000 violent deaths between 2004 and the end of 2009. They included:

Assange has won global plaudits, including a Walkley award in Australia, for his journalism. His work was as significant as that of Daniel Ellsberg, who in 1971 released the Pentagon Papers that shone a light on the war crimes committed during the Vietnam War.

To the US security and defence establishment, what Assange did was criminal. And therein lies the danger. We are now all on notice that the US will trash fundamental democratic values if it suits it to do so.

But the response from political leaders in Canberra needs to be clear and unambiguous. Washington must be told that attacks on Australian citizens who exercise their democratic rights will not be tolerated.