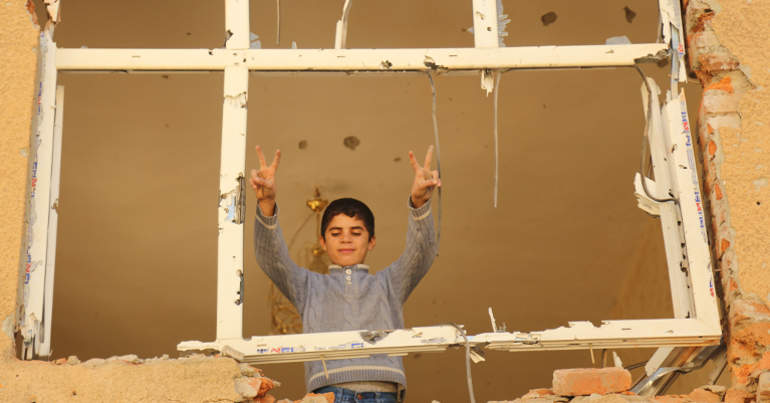 The noise is deafening as giant attack helicopters fill the sky. They land excruciatingly close, just metres from us. A line of police guard the killer machines. These helicopters have been deliberately built, piece by piece, in factories all over the world, in order to murder.

Waves of despair wash over me as I think about all the people, unknown to me, who have been killed by weapons fired from helicopters just like this. I cry for those who have lost loved ones in Afghanistan, Syria, Libya, Palestine, and in Kurdistan.

At the same time, a truck is pulling into the ExCeL Centre in east London, delivering weapons for the world’s biggest arms fair. Protesters run over and block the road. Some people sit down in front of the truck. We shout, “Jin, jiyan, azadî!” – Women, life, freedom – a Kurdish revolutionary chant.

The police form a line. On command, they charge at us. A woman clings onto her baby as she is violently pushed again and again. We scream at the police: “She’s got a baby! You’re hurting her baby!” But still they shove.

My friends lie down and chain themselves together, making it more difficult for the police to move them. I try to check they’re okay, but a policeman shoves me in the chest; a subtle sexual assault which he can easily get away with.

“I don’t understand why they’re purposefully getting arrested,” I hear a police officer mutter to her colleague as she watches my friends. I look at her in disbelief. Over 100 people, including me, have been arrested over the last few days. Hasn’t she grasped why we might be doing this? She can see those brutal attack helicopters just 20 metres from her, right? She must know that she’s guarding a weapons exhibition?

A few days earlier I lay in the road near the west entrance of the ExCeL Centre with another activist, arms locked together through a tube to make it more difficult for the police to remove us. Other friends were doing the same, blocking the eastern entrance. For a brief hour, arms companies were unable to deliver their weapons to the Defence Security and Equipment International (DSEI) exhibition. I was aggressively arrested for obstructing the highway, and I still have marks on my body from the police.

For me, blocking the DSEI arms fair is an obligation. My activism and writing has taken me to Palestine, Kurdistan and Syria. I have seen first-hand the devastation caused by this sickening arms industry. I have interviewed families whose children have been murdered with weapons made in Europe. I have met a 10-year-old boy who miraculously survived after an Israeli sniper shot a bullet through his brain. I have had tear gas and sound grenades fired at me in Palestine, and I have been surrounded by armoured vehicles in Kurdistan. I have stood on rubble that was once family homes, and I have seen human blood splattered on the walls of buildings.

So it is my duty to take action against this disgusting weapons exhibition. As I write this, arms deals are being made, mostly by privileged men who have never had to experience the terror of living in a war zone. After DSEI, these men will head back to their comfortable family lives. Maybe some will be tucking their kids in at night, without a thought for the weeping mothers and fathers whose children have been killed by their weapons.

I am constantly surprised by the fact that so many people in this country make a distinction between ‘us’ and ‘them’. To quote author Mark Curtis, those being murdered by weapons are “Unpeople — those whose lives are deemed worthless, expendable in the pursuit of power and commercial gain.” They don’t matter to us.

“But the arms industry provides jobs!” people say. I hear this argument made time and time again. But how is it possibly okay to make a living from the corpses of others? How sick is our society, when it is seen as reasonable to work as an arms dealer, but it is seen as extremist and unlawful to blockade weapons exhibitions and arms factories?

For all those who would still argue that these jobs are precious, you might like to know that the UK arms industry is heavily subsidised by the government. Campaign Against Arms Trade states that “the support for arms exports alone costs taxpayers £100m a year.”

As I get on the DLR following a fourth day of protesting against the arms industry, I’m covered in bruises after days of being shoved by the police. I look around me at the people on their smartphones. If only we could break through our collective apathy. If only all these people were out on the streets, resisting the arms fair. Then we could really shut it down once and for all. If only we knew our power.