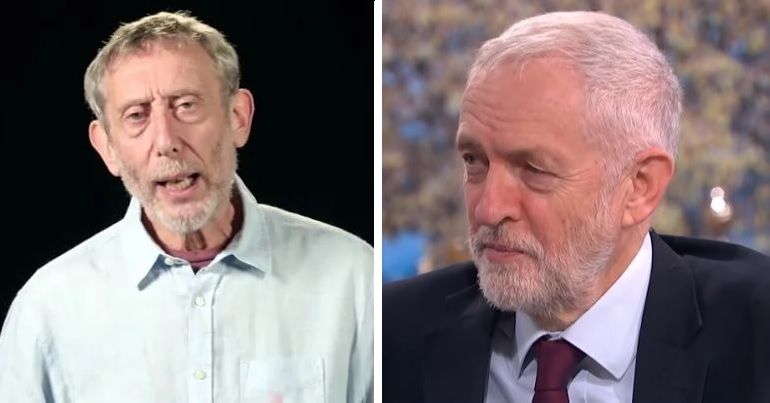 Jewish author Michael Rosen has responded to the Chief Rabbi’s comments about Jeremy Corbyn. And it’s essential reading, because it sets the record straight on behalf of thousands of Jewish people, myself included, who support the Labour leader.

If you only read the establishment press, you could be forgiven for thinking that antisemitism is rife in the Labour Party and that no Jewish people support Corbyn. This is far from the truth. From the actual numbers of antisemitic allegations within the party being a tiny fraction of its membership to antisemitism in the Conservative Party, there are facts about this supposed ‘crisis’ that simply do not make headline news.

Rosen wants to set the record straight on two statements:

But as Rosen says:

Neither of these statements is true or anything like true.

He also clarifies that:

I’ve known Jeremy Corbyn for 30 years. He is no antisemite. He has put his neck on the line hundreds of times in opposing racism, antisemitism, far right fascism, holocaust denial.

Rosen then points out that:

There are thousands of Labour Party members who are Jewish.

He highlights that the media says “it’s impossible or ‘not safe’ for Jews to stay in the Labour Party”. And he accuses the media of ‘dishonesty’ for not giving those Jewish people a voice:

If the media had wanted to, they could have asked Jewish MPs, Jewish candidates in this election ‘Is it impossible or unsafe for you to be in the Labour Party?’ It has been dishonest of them to have not done that.

Rosen addresses the Chief Rabbi’s interference in the election, stating:

There are also Rabbis who have either said that they will vote Labour and/or have expressed great concern over the way Jewish religious leaders (Rabbi Romain and the Chief Rabbi) have intervened in this election.

And he believes that:

The silence in the mass media about the dangers of a religious group saying, in effect, ‘don’t vote for Party X’ are very great.

In particular, this is an issue in this election because:

it is a two-horse race. Saying ‘don’t vote Labour’ is in effect saying, ‘Let’s have a victory for the Tories’.

But as Rosen points out, this isn’t a surprise given the Chief Rabbi’s previous support for Johnson. And he clarifies that:

the Chief Rabbi may ‘speak for’ a majority of Jews in the UK but he does not ‘represent’ them. He is the leader of the United Synagogue which has a congregation of around 40,000. According to the Board of Deputies there are 284,000 Jews in the UK. Half of us are affiliated to synagogues, half of us are not.

One of the most heartbreaking and twisted things to come out of the antisemitism ‘crisis’ is Jewish people standing up for Corbyn and facing antisemitic abuse for doing so. Jewish people who support Labour are told they’re ‘the wrong kind of Jew’ or have their opinions dismissed. As Rosen writes:

To say these things has invited Jews and non-Jews on twitter to call me a ‘kapo’ (a Jewish concentration camp guard), a ‘used Jew’ (that from the editor of ‘Jewish News’), someone who ‘dons the cloak of Jewishness’ (a Jewish DJ and actor), one of the ‘useful Jewish idiots’ (from the commentator Dan Hodges), ‘a cheerleader for Soros’ (from Lee Harpin political editor of the Jewish Chronicle), and a plea to the BBC to not employ me to present ‘Word of Mouth’ (from the QC Simon Myerson and the campaigner against antisemitism (!) Euan Philips).

Clearly some people think that the best way to combat antisemitism is to be antisemitic.

The twisted spectre of this means that many Jewish people aren’t anxious about Corbyn but they are anxious about speaking up for Corbyn. A climate of fear has been created for Jewish people. It’s just not fear of the Labour Party gaining power.

Meanwhile, Rosen takes aim at the antisemitism in the Conservative Party that somehow doesn’t hit the headlines in the same way:

Johnson is a bigot and a liar. He and the Tories have been quite content to snuggle up to extreme right wing and antisemitic parties in Europe – like Orban in Hungary. He has also kept quiet about the pattern of antisemitism coming from Jacob Rees-Mogg, who has talked of his Jewish colleagues in the House of Commons as ‘illuminati’, questioned whether they ‘understand’ the constitution, he has done the ‘Soros jibe’ (this is an antisemitic ‘trope’ about the financier Soros deemed to be an international wheeler and dealer); Rees-Mogg has also retweeted a tweet from the Alternative für Deutschland – the far-right organisation in Germany and he has had dinner with the far-right British organisation, ‘Traditional Britain Group’.

And this leads Rosen to ask a fundamentally important question:

Ask me, who am I ‘safer’ with: a Johnson-led government with its record of the ‘hostile environment’, persecution of Windrush generation, and persistent antisemitic jibes from leading party members or this Labour Party, and I say, Labour every time.

It all comes down to class

Crucially, Rosen also says that he isn’t just looking at the election as a Jewish issue. Because fundamentally, the election is about class.

But I don’t look at the election purely through a Jewish prism. It is a clear class issue: a Tory government will continue to ravage the lives of of working class people through attacks on wages, public services, and the disabled. A Labour government will halt these and start to reverse them.

Rosen is right. This election is about class. It’s about whether we want a society run by and for elites or whether we want radical and positive change. If I really believed antisemitism was rife in the Labour Party and promoted by its leader, then I wouldn’t vote Labour. But I don’t. I believe that Corbyn’s Labour is being attacked from every angle because he is a direct challenge to decades of rule by the elite.

So if the antisemitism issue is putting you, your friends, or your family off voting Labour, listen to people like Rosen. Listen to the other Jewish voices that aren’t promoted in the mainstream press. Because there are lots of us. And we believe a Labour government will benefit all of us.