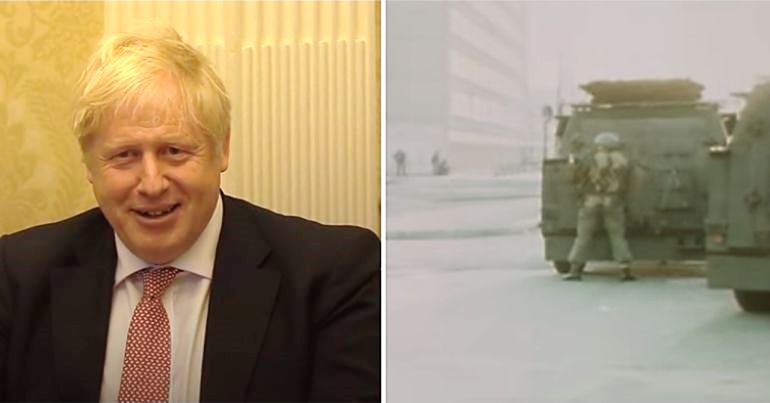 On 13 January, Boris Johnson visited Belfast to meet the leaders of the restored government. Johnson claimed he could “see the hand of the future”. It was an imitation of Blair’s “I feel the hand of history upon our shoulders” comment. Blair used this during the 1998 Good Friday Agreement (GFA) negotiations.

And one of the opening paragraphs of that agreement declares:

The tragedies of the past have left a deep and profoundly regrettable legacy of suffering. We must never forget those who have died or been injured, and their families.

But in over twenty years, most of the dead, the injured, and their families have still not received justice. And the families of victims of killings by the British army, or as a result of British collusion with loyalist terrorists, are still campaigning for justice.

Johnson declared that the new deal that restored government to the north of Ireland had struck a “balance” between victims and British army veterans. Regardless of any balance Johnson may want to see, he needs to be conscious of the victims. With or without a government in the north, both the victims and their families must get priority.

And it’s difficult to see how a UK government can take a balanced approach. It was one of the main players in the conflict. The government had a full army, reserve army, and police force at its disposal in the north of Ireland. It also ran the prisons and arrested and shot the other players.

So in the case of the conflict in Ireland, the balance of power was with the British forces. The British claimed, and continue to claim, jurisdiction over the north of Ireland. They were the legal force. Additionally, over 300,000 members of the UK armed forces served in the north over the course of the conflict. And while it’s difficult to put a number on IRA membership, it’s believed to have peaked in the mid-1970s at 1,500.

The 2014 Stormont House Agreement (SHA) already agreed the mechanism for dealing with the past. So the new deal that restored the government hasn’t changed anything. The SHA allows for an independent oral history archive where people from Ireland and the UK can “share experiences and narratives related to [the conflict] the Troubles”.

It also allows for an independent body, the Historical Investigations Unit (HIU), to investigate outstanding deaths related to the conflict. This process was to be “victim-centred”, and it was to take over cases from the Historical Enquires Team (HET), and the work of the north’s Police Ombudsman.

A previous holder of this position, Al Hutchinson, upset victims’ families, in particular the Loughinisland families. Hutchinson said there was insufficient evidence of collusion in that case. Thankfully his successor Dr Michael Maguire rebutted this.

Johnson’s call for “balance” is as infuriating as the continuance of a dangerous British government narrative. That narrative portrays British forces as the victims. So it risks delaying justice even further. In May 2018, Theresa May claimed that investigations into the conflict in the north were “patently unfair” as British soldiers were the only ones under investigation. Figures from the PSNI showed that to be ‘patently untrue’.

In defence of British soldier Dennis Hutchings, who was arrested for the killing of John Pat Cunningham, Conservative MP Richard Benyon claimed the GFA was ‘appeasing terrorists’.

Johnson and his junior defence minister, army veteran Johnny Mercer, inflame this further when they talk about “vexatious” prosecutions and claims against army veterans. The implication is that the claims against British army veterans are false. That is false. And Grainne Teggart of Amnesty International Northern Ireland refutes their claim.

In fact, the real ‘vexatious claim’ is the extent of British involvement in the conflict. Some claim the British forces were only involved in 10% of the killings during the conflict and the remaining 90% were “acts of terrorism”. But these figures are misleading, as the 30% attributed to loyalists could also include British forces involvement as a result of collusion. Campaigners and journalists have already done lots of excellent detailed investigative work here, but we need more.

Under the new deal for restored government in the north, the SHA is to be legislated for “within 100 days”. If this really is a “new approach”, then the balance must be in favour of the families. They’ve been waiting far too long.