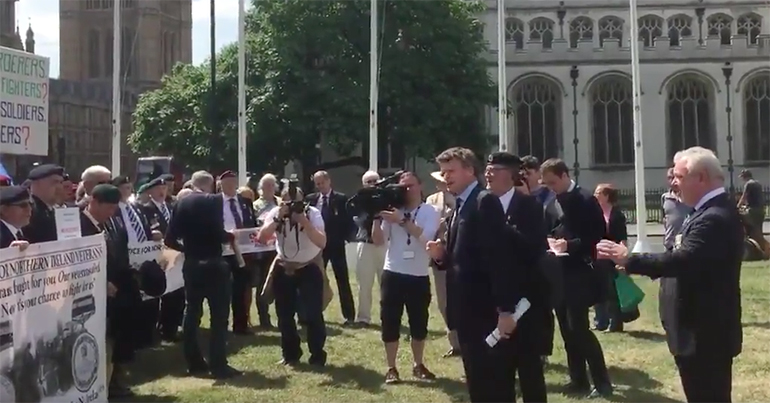 On 15 June 1974, the British army shot and killed John Pat Cunningham. On 15 June 2018, 44 years later, millionaire Tory MP Richard Benyon called for the protection of Cunningham’s killers through a proposed bill to create a statute of limitations for the armed forces.

Speaking to the rally in support of my Bill. An honour to meet Dennis Hutchings, who has been dragged through the courts by the NI DPP. pic.twitter.com/iiBt0Dj2eN

On the anniversary of Cunningham’s killing, Benyon proposed a statue of limitations that would ban criminal prosecution of British soldiers. He addressed a rally of former British service personnel in Parliament Square and claimed under the Good Friday Agreement “the terrorists have been appeased time and time again”.

This reinforced a similar false claim made by Theresa May at PMQs on 9 May. May claimed the only people being investigated were those in the armed forces. But legacy statistics released by the Police Service of Northern Ireland (PSNI) rubbish such claims.

Tweeting about the rally, Benyon stated it was “an honour to meet Dennis Hutchings”. At the rally, he also addressed his arrest directly saying it “is ridiculous and it has to stop”.

Consequences of Benyon’s Statue of Limitations

Benyon’s legislation would ban [paywall] criminal prosecution against British soldiers based on allegations more than 10 years old. And according to Benyon’s claims, the legislation would not just to apply to Operation Banner – the operation where the British army gave support to the police in Northern Ireland from 1969 to 2007.

It would also apply to “subsequent operations”. In other words, operations like Iraq and Afghanistan, as reported [paywall] by The Telegraph. This would put the UK, as previously reported by The Canary, in the same category as former dictatorships in Chile and Argentina.

As has happened after other conflicts, the public needs justice for what British forces did in Ireland. Claims of being “hounded into old age” offer no excuse. The legislation proposed by Benyon would ensure the murky world of British involvement in Ireland, and around the world, remains hidden and unpunished.

– Contact Justice for the forgotten, PFC, and Relatives for Justice