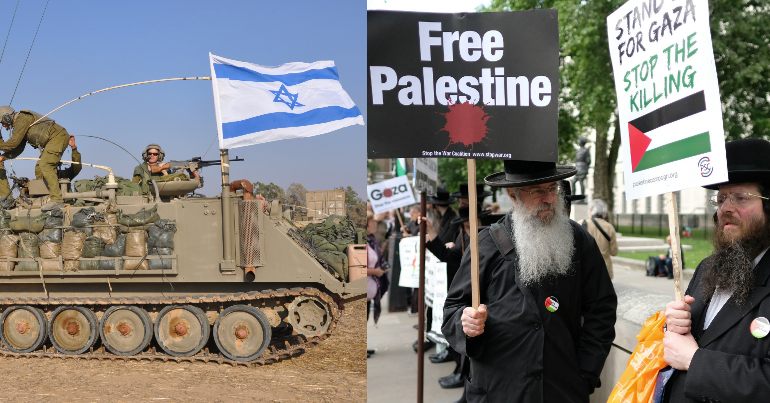 Labour leader Keir Starmer recently sacked shadow education secretary Rebecca Long-Bailey after she shared an interview on social media that he said contained an “antisemitic conspiracy theory”. Starmer claims he wants to send a strong message that under his leadership there will be ‘zero tolerance’ of antisemitism.

In reality, he’s just going along with the final chapter of a ludicrous, transparently manufactured, and politically-motivated smear campaign orchestrated by Zionist interests along with Tory and Labour right elements. Together, they had the shared goal of sabotaging Jeremy Corbyn’s chances of becoming prime minister and now want to raze any last remaining vestige of his term as Labour leader from frontline British politics.

As The Canary has previously argued, the underlying premise that criticising the violent actions of Israel’s state security forces is antisemitic – which is what happened in Long-Bailey’s case – is patent nonsense. But that’s not all. Because closer examination reveals that perhaps it’s those who tacitly accept this narrative who are buying into antisemitic insinuations.

Not all Jews are blindly pro-Israel

For one thing, the assumption that all Jews support Israel’s behavior, its current stance vis-a-vis the conflict or even its continued existence as a Jewish state, is completely false. Some of the most outspoken voices condemning Israel’s actions are themselves Jewish. This includes Norman Finkelstein, one of the world’s leading experts on the conflict in Palestine who is not only himself Jewish but also the son of Holocaust survivors. The Canary spoke to Finkelstein in an exclusive two-part interview last year in which he likened the antisemitism smear campaign against Corbyn to the Salem Witch Hunts.

Others include Noam Chomsky, the world-renowned linguist and political dissident, the late British historian Tony Judt and many other Jewish intellectuals and activists around the world.

In fact, some of Israel’s fiercest critics are themselves Israelis. Gideon Levy, for instance, is a columnist for the progressive Israeli newspaper Haaretz and has described the building of settlements within the occupied territories as “the most criminal enterprise in [Israel’s] history”.

Ilan Pappe, meanwhile, has written books with titles such as The Ethnic Cleansing of Palestine and Ten Myths About Israel, which condemn Israel’s foundation as a settler-colonial project that inevitably entailed the expulsion of the Palestinians. Both of them are not only staunch critics of Israeli policy, but also support a one-state solution to the conflict, which for them ought to establish a secular non-sectarian state with equal rights for Jews and Palestinians.

… and the historical context

There is also an important historical context to keep in mind. Because long before Israel’s founding there were divisions about whether or not Jews should aspire to the establishment of a Jewish state. In fact, Zionism had major rival movements that called for Jews to fight instead for equal rights in the countries in which they already lived, such as the Bundists. As Pappe puts it:

Since its inception in the mid-nineteenth century, Zionism was only one, inessential, expression of Jewish cultural life. It was born out of two impulses among Jewish communities in Central and Eastern Europe. The first was a search for safety within a society that refused to integrate Jews as equals and occasionally persecuted them. …

The second impulse was a wish to emulate other new national movements mushrooming in Europe at the time. This was based on the ethnic-nationalist idea that nationhood is based on ethnic identity rather than sharing common borders and language.

In a strange irony, Zionism later shared this ideological feature with other influential ethno-nationalist movements of the early 20th Century, including German National Socialism. Ken Livingstone was effectively forced out of the Labour Party for pointing out this straightforward fact during a television interview in 2016. Finkelstein came to Livingstone’s defense, stating:

Livingstone maybe wasn’t precise enough, and lacked nuance. But he does know something about that dark chapter in history. ….

Hitler wasn’t wholly hostile to the Zionist project at the outset. That’s why so many German Jews managed to survive after Hitler came to power by emigrating to Palestine. But, then, Hitler came to fear that a Jewish state might strengthen the hand of ‘international Jewry’, so he suspended contact with the Zionists. Later, Hitler perhaps contemplated a ‘territorial solution’ for the Jews. …

Livingstone is more or less accurate about this – or, as accurate as might be expected from a politician speaking off the cuff.

In short, at various points in the 1920s and 1930s, Nazism and Zionism’s respective leaderships were in agreement that Jews shouldn’t live in Germany but rather in a state somewhere else, such as Palestine, albeit for different reasons.

… that lives on to this very day

To this day, many Jews reject this ethno-nationalist idea that Israel is where Jews rightfully should live simply by virtue of being Jewish. Equally, many also reject the notion that Israel should serve as some kind of ‘safe haven’ where Jews can go and live as an ethnic majority. As Judt put it in an interview with The Atlantic:

Why is it ok for a Jewish minority to dominate an Arab majority, its leaders to call for expulsions of majority members, etc., but not ok for a democracy to have a majority and minority both protected under law?…

[The fear of there not being a Jewish-majority state in the world] is the fear of the paranoid hysteric – like the man at the dinner table in the story I wrote in the New York Review who had never been to Israel but thought I should stop criticizing it because “We Jews might need it sometime.”…

I find this contemptible — [people who take this view] are quite happy to see Arabs killed in their name, so long as other Jews do it. That’s not fear, that is something between surrogate nationalism and moral indifference.

The worst insult of all

Finally, the notion that all Jews support Israel’s behavior is not only false but also defamatory. Because Israel is one of the world’s worst and most prolific human rights violators. It occupies the West Bank and blockades the Gaza Strip while continuing to build settlements in the former in flagrant violation of international law and countless United Nations resolutions. It denies Palestinians living in these areas even the most basic of rights. So much so that many mainstream figures, including former US president Jimmy Carter, have described Israel as an “apartheid” state. And, worst of all, it frequently uses violence against this civilian population, including shooting dead unarmed protesters and even children as young as nine years old.

So by implying that criticism of Israel is a criticism of all Jews, those who buy into the tenets of the antisemitism smear campaign are, in turn, implying that all Jews support, or perhaps even are themselves implicated in, the above actions of Israel and its security state apparatus. This is every bit as outrageous as it would be to claim that every last member of the Chinese diaspora, including the roughly five million Chinese-Americans living in the United States, must by definition support the human rights violations of the Chinese government.

There is another irony to this situation still. Because this insinuation is antisemitic even according to the International Holocaust Remembrance Alliance’s (IHRA) own definition. It states that “Holding Jews collectively responsible for actions of the state of Israel” and that “targeting of the state of Israel, conceived as a Jewish collectivity” constitutes antisemitism. Yet it simultaneously says that “Denying the Jewish people their right to self-determination, e.g., by claiming that the existence of a State of Israel is a racist endeavor” also constitutes antisemitism.

As a result, its entire criteria appears not just ridiculous but also internally contradictory. Because it insists that Israel should be a state exclusively for Jewish people yet at the same time says that conflating Israel with all Jews is antisemitic. Finkelstein described the IHRA definition to The Canary as “completely idiotic” and said that Corbyn’s willingness to adopt it was “a fatal mistake”.

The IHRA definition is, in fact, so absurd that the line between parody and reality is getting increasingly blurred. The Skwawkbox‘s Steve Walker recently posted about a complaint he made to the Labour Party in which he reports Starmer for “conflation of Jewish people with actions of Israeli government in breach of IHRA code”. The complaint reads:

By describing Maxine Peake’s criticism of Israel as ‘an antisemitic conspiracy theory’, Mr Starmer has collectively equated Jewish people with the Israeli state. …

As a member of the Labour Party I am appalled at this casual antisemitism and lack of care by its leader.

It’s difficult to discern whether Walker is joking or being deadly serious – and perhaps that’s the point. The charge of violating IHRA’s code in this way could arguably also be levelled at other Labour right figures such as Nia Griffith, Stella Creasey, and Wes Streeting.

Time to regroup, reassess and reorganize

Clearly, the antisemitism smear campaign has now become so bizarre that reality has been turned on its head. Regrettably, both Corbyn beforehand, and now Long-Bailey, one of his only remaining allies in front bench British politics, have foolishly acted as if one can appease these ruthless forces. Obviously, it’s impossible to appease something whose goal is to destroy your political career by any means possible and irrespective of what you say or do.

The result has been that they have helped to banish themselves back to the backbenches and put the Labour-right back in the driver’s seat. The left must now regroup, reassess, and reorganize for the battles ahead. Because these forces will no doubt do the same thing all over again next time a challenge to the status quo comes along. As Labour legend Tony Benn once said: “every single generation has to fight the same battles again and again and again. There’s no final victory. And there’s no final defeat”.