Establishment Democrats are getting cocky. That could mean 2016 all over again. - The Canary 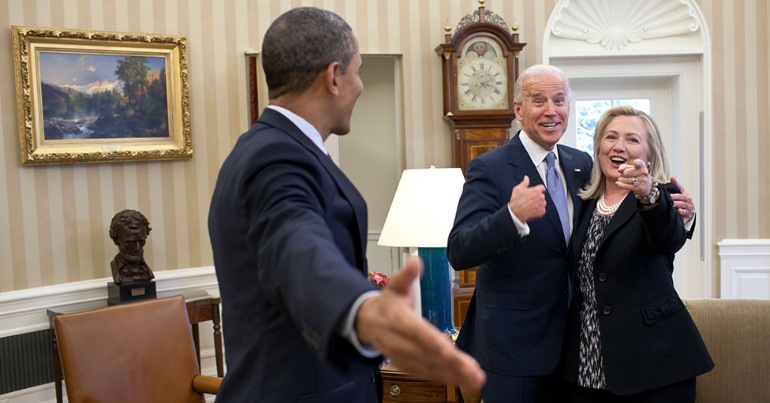 Polls on the upcoming 2020 presidential election in the US show presumptive Democratic Party nominee Joe Biden ahead by large margins. As a result, Biden’s campaign now seems confident of a decisive victory, or perhaps even a landslide. In fact, it’s almost reached the point of declaring the election already over.

And this triumphalism is quickly turning into outright complacency. For a number of reasons, Biden’s victory is not as certain as it might currently seem.

Over before it’s even begun?

As The Canary has previously reported, some polls show Biden leading incumbent president Donald Trump by double digits. This forecast has seemingly affected the typically self-assured Trump. In stark contrast to his usual bravado and narcissism, he’s even acknowledged his dire polling position himself.

At the same time, though, he is continuing his usual strategy of casting doubt on the fairness of the electoral process. He’s also accused the press of being inherently unfair to him and demanded an apology from CNN for a poll result showing him losing. And he’s even suggested that he won’t accept the result if he loses or that the election should be postponed.

All of this, of course, has been taken as proof by establishment Democrats that Biden is now all but guaranteed to win the November election. Some party figures have even suggested that he shouldn’t participate in televised debates. Though there is nothing in the US Constitution requiring the candidates to participate, it has become a widely accepted convention and has included both major parties’ candidates since the 1970s.

But they may have begun the jubilations too early. The reality is that there a number of reasons why Trump might still win. After all, many of the same things being said about Biden now were said about Hillary Clinton around this time of the year in 2016. And we all remember how that turned out.

As a matter of fact, Clinton was leading Trump in the polls just as Biden is now, at some points by double digits, in the months leading up to the November 2016 election. Indeed, there are plentiful reasons to question the reliability of polls when it comes to elections and referendums. Because whereas polls about a specific policy issue measure something that doesn’t shift radically over time, such as support for public ownership of transport, polls about voting intention attempt to measure future behaviour. And obviously people change their minds about who to vote for more readily than they do over support for specific policies.

Worse still, the Biden campaign seems to be repeating Hillary Clinton’s hubris and overreach. His campaign is now switching its focus to traditionally Republican-voting states, which implies that it’s aiming for a landslide rather than just a victory. This was a disaster for Clinton as she took for granted key swing states that ultimately went for Trump.

Just wait until Trump gets into full-swing

Another reason that Trump might still win is that his campaign hasn’t got into full swing yet in terms of attacking Biden. Biden has a number of weaknesses, both personally and politically, that Trump will easily be able to exploit. For instance, Biden supported the disastrous North American Free Trade Agreement (NAFTA) while a senator in the 1990s.

NAFTA decimated manufacturing jobs in the US’s industrial heartlands, sometimes called the ‘Rust Belt’, by facilitating labour outsourcing to Mexico. It’s widely believed that Trump’s opposition to it played a large part in winning the crucial rust belt states that won him the electoral college. Once he gets onto the campaign trail, Trump will no doubt bring this issue to the fore.

Though Trump’s replacement of NAFTA is hardly an improvement, this paradoxically doesn’t matter. Because Trump’s entire political career and public image is based not on reality but on his admittedly formidable skill as a television personality. And this in turn will serve as an advantage that Trump has over Biden, whose clearly declining mental state has already led to a number of embarrassing gaffes, that will surely increase once the campaign ramps up.

Biden also has a number of weaknesses on foreign policy. He supported the disastrous Iraq War as a senator. Trump made his claimed opposition to the Iraq War a big issue during his 2016 campaign for the presidency and even pledged to ‘end the era of endless war’. In fact, Trump arguably ran to the left of both his own party and the establishment wing of the Democratic Party at the time.

Though his credentials as a non-neoconservative on foreign policy are highly dubious (it’s doubtful whether he did, in fact, oppose the Iraq War), again reality is not as important as image. So in spite of supporting a coup attempt in Venezuela and failing to shut down most of the US’s hundreds of military bases around the world, Trump might be able for a second time to claim that he is the more isolationist of the two major party candidates.

Certainly, he has largely governed as a military hawk. From his appointment of major neoconservative figures like John Bolton, to his escalation of tensions with Iran, he has shown himself to be little better than most of his predecessors. But in spite of this, he’s delivered perhaps just enough tokenistic changes, such as pulling US troops out of Germany and technically not starting any new wars, to position himself as the marginally less bellicose candidate. However, when positioned next to a figure like Biden, this isn’t much of an achievement.

Is Biden really much of an improvement?

And so finally what to consider is whether Biden represents much of an improvement over Trump. Though he doesn’t flaunt his authoritarianism in the same way Trump does and has shown some modest inclination toward addressing climate chaos, Biden’s political record is overwhelmingly one of support for all the worst aspects of the Washington status quo.

From gutting social protections to supporting so-called free trade, and from sucking up to Corporate America to rallying behind regime change, Biden has proven himself over many decades to be one of the status quo’s most loyal servants. And so, just like in 2016, Trump might be able again to pass himself off as the anti-status quo candidate to just enough of Middle America to win the electoral college for a second time.

In short, the Biden campaign’s complacency might be its undoing. The only solution is to adopt large swathes of Bernie Sanders’ proposals so that it can attract the votes of those who want real change. But given his long-standing ties to the private interests that truly rule the country, we shouldn’t hold our breath.