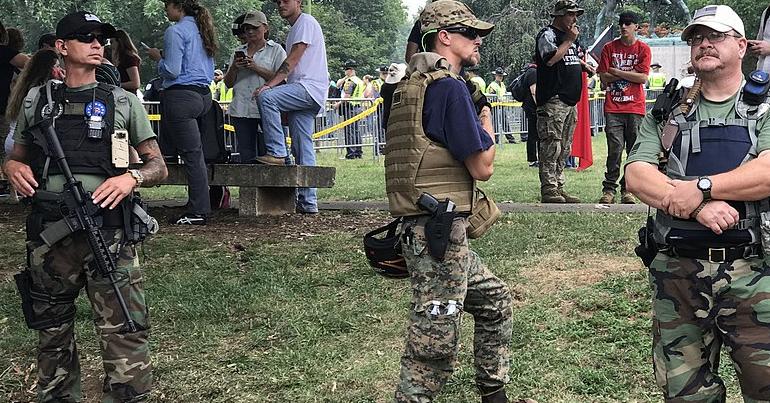 Donald Trump and his cronies have been increasingly cosying up to white supremacist militias since the beginning of his presidential election campaign.

When asked about Rittenhouse in an interview, Trump Jr remarked: “We all do stupid things at 17”.

During his first presidential election debate, Trump was asked whether he condemned white supremacists, but he didn’t. Instead Trump called on known hate group the Proud Boys to “stand back and stand by” because “someone’s got to do something about Antifa”.

The Southern Poverty Law Centre says of the Proud Boys:

Their disavowals of bigotry are belied by their actions: rank-and-file Proud Boys and leaders regularly spout white nationalist memes and maintain affiliations with known extremists. They are known for anti-Muslim and misogynistic rhetoric. Proud Boys have appeared alongside other hate groups at extremist gatherings like the “Unite the Right” rally in Charlottesville.

Since then, the Proud Boys have attended or provided security for at least two Republican supporting rallies. One was for Donald Trump Jr, and another was attended by Republican member of congress Matt Gaetz.

Last week, Democrats in Alaska and Florida received emails which claimed to be from the Proud Boys, telling them to vote for Trump “or else!” and saying that if they voted for another candidate, “we will come after you”. The Proud Boys and the FBI say that the email was a hoax, and that it came from Iran.

Several militia groups pledged to show up to polling booths, promising to bring their guns with them. There are at least two reports so far of a Trump supporter showing up armed to a polling station. One witness tweeted:

Hear this Trump supporter threatening physical violence. He’s been here for 50 minutes. @nypd said they are aware of the threats and “that is why we’re here.” Threats at polling sites at ok, as long as it’s 100 feet away from polling site entrance? @BOENYC @bradlander pic.twitter.com/Qxk7SgJWtS

Police in North Carolina arrested another armed man, Justin Dunn. He was only arrested after he had remained at the polling station for some time however, and had returned after being banned from the site. Dunn, a former republican candidate for the House of Representatives, was wearing a pro-Trump hat. He was arrested for a trespass offence, but not voter intimidation.

This report from US anarchist new site It’s Going Down gives a run down of the right-wing violence over the last 48 hours, including armed intimidation of a Biden campaign bus, and a group of Trump supporters jeering at African-American voters in Texas. Graves at a Jewish cemetery in Michigan were defaced with the initials TRUMP.

Trump has been encouraging his supporters on Twitter to volunteer at the booths in an ‘Army for Trump’. This has seemingly given a green light to those on the right who want to create an intimidating presence at the booths.

A tried and tested fascist tactic

This morning, when I was thinking about all this, I couldn’t help being reminded of polling booths I attended thousands of miles away from the US in November 2015. The booths were surrounded by military hardware, with heavy artillery pointing at them. Inside and outside many of the polling stations were uniformed and armed militia members.

It was the Turkish parliamentary election, and the booths were in Turkey’s majority Kurdish Southeast. The militia members were from the state supported ‘Village Guards’. I was part of a delegation of internationalists who had answered a call from Turkey’s People’s Democratic Party (HDP) to act as observers and witnesses. And we heard how local communities were facing a campaign of intimidation to keep them from voting.

I am not, of course, comparing the HDP to the US Democratic Party. The HDP is not only anti-capitalist, but is part of a movement which critiques the concept of the state itself, and which intends to move beyond it. The Democrats, in contrast, are committed to the continued existence of both the state and capitalism, and Joe Biden even voted for the 2003 US attack on Iraq.

But the tactics of Turkish president Recep Tayyip Erdoğan and Trump in cosying up to armed right wing militias are strikingly similar.

In the run up to that 2015 election in Turkey, the left had been the target of murders and bomb attacks linked to a variety of right-wing and Islamic groups, resulting in an atmosphere where mobilisation against the president was very difficult. Many of the groups who carried out those attacks have received support from the Turkish state in one way or another. The result was very favourable to Erdoğan.

The Turkish state consistently uses national and international armed groups to its benefit. For example, in the run up to Turkey’s invasion of Afrin in 2018, at a time when the president urgently needed to dominate and oppress the left, Erdoğan made a hand gesture associated with the Grey Wolves, a neo-fascist organisation associated with massacres inside Turkey.

On Monday 2 November this year, amidst Turkish support for the Azerbaijani attacks on Armenians in Nagorno-Karabakh, the Grey Wolves defaced a French memorial to the genocide of Armenians, a genocide that Erdoğan denies happened. The graffiti on the memorial included Erdoğan’s initials.

A tactic used by states worldwide

The comparison doesn’t have to end there. One could easily point to the Israeli state’s use of the armed Israeli settler movement for its own benefit. Or the close collusion which has existed between the British state and Northern Ireland’s armed Loyalists.

Escalating militia violence in the US

The story has been similar in the US this year, with white supremacist militias implicated in escalating acts of violence. According to It’s Going Down there has been:

a string of arrests of far-Right, militia, and neo-Nazi groups plotting various acts of murder and violence. While news of the plot by Michigan militia members has made major news, less known is the Proud Boy in North Dakota who threatened to blow up a polling station, a police officer in Phoenix, AZ who threatened to murder the local Democratic Major, and the GOP activist who conspired with militias to kidnap the Governor of Ohio. Meanwhile far-Right militia groups like the Oath Keepers and the Three Percents have publicly stated they will organize armed demonstrations at the polls; engaging in violence if necessary.

Unsurprisingly however, the State isn’t interested in the actual threat of far-Right violence. Instead, it’s focused on putting down protests that may arise if Trump attempts to steal the election.

What’s in it for Trump?

So, what’s in it for Trump? I guess what’s in it for him is the same as when other politicians have flirted with the violence of paramilitary groups. He gets to outsource the violence of the state by egging on a bunch of gun-toting racists, while all the time maintaining the plausible deniability of never quite being directly associated with their most extreme actions. He is also clearly increasingly playing to, and building a base within, the extreme right.

The ongoing courtship between Trump and white supremacist militias is a chilling reminder of the depth of the US’s growing right-wing violence. We need to stand in solidarity with those who rebelled across the US this year after the death of George Floyd, and who bore the brunt of the violent reaction by both the state and the militias. Whatever happens over the coming days, they are going to need our comradeship.