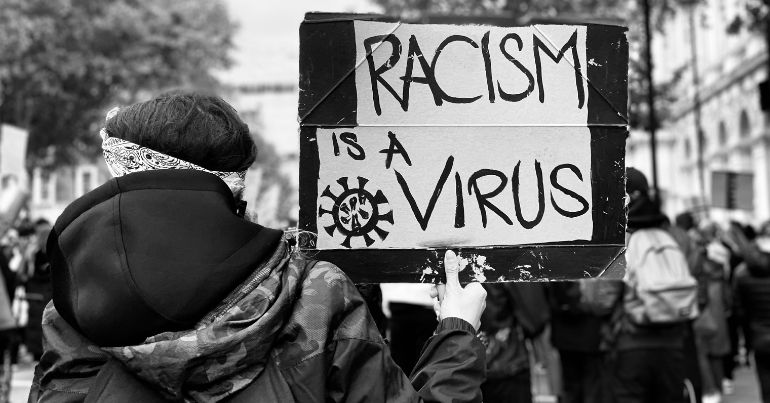 SAGE recently highlighted the issue of trust as a key factor contributing to high coronavirus (Covid-19) vaccine hesitancy among ethnic minority groups in the UK. According to a survey, 72% of Black respondents and 42% of Pakistani or Bangladeshi respondents stated they were unlikely or very unlikely to be vaccinated. This stands in stark contrast with 82% of all respondents saying they are likely or very likely take up the vaccine.

Though online misinformation is partly to blame, vaccine hesitancy among BAME communities is the result of a longer, darker history of racism in medicine and healthcare. From the birth of modern gynaecology to the birth control pill, much of western medicine was developed through the oppression, exploitation, and violation of Communities of Colour by white medical professionals. The impact of these abuses endures today.

Ideas about racial difference were developed by English thinkers such as Francis Galton, who coined the name eugenics, and Herbert Spencer, a key proponent of social Darwinism. Their theories were used to justify the colonisation of indigenous populations, the enslavement of Africans, and unethical medical practices against people considered racially ‘different’.

“Father of modern gynaecology” James Marion Sims’ revolutionary procedures were developed through experiments on enslaved Black women. He didn’t seek consent from his patients, nor did he seek to relieve their pain during vivisections. Having “perfected” his surgical techniques, he went on to operate on white women. This time, he used anaesthesia. His decision was based on beliefs about Black people’s insensitivity to pain which persist today.

When Henrietta Lacks was diagnosed with cervical cancer in 1951, a physician took cells from the cancerous tumour and passed them on to a researcher. She wasn’t made aware of this, so couldn’t give consent. These were cultured into the HeLa “immortal” cell line which have informed medical breakthroughs including vaccines against polio, HPV (cervical cancer), and coronavirus.

From 1932, over 600 African American men in the rural town of Tuskegee were used as guinea pigs. Doctors wanted to see whether syphilis manifested itself in different ways if left untreated in Black bodies versus white bodies. Suffice to say, white men weren’t included in the experiment. Participants were told that they were being treated for “bad blood”. And they were encouraged to take part in exchange for free medical care. Doctors purposely left these men to deteriorate and die from the treatable disease. The study lasted for forty years. However, it came to a halt when journalist Jean Heller exposed the experiment in 1972.

Imperial powers also looked to colonial subjects abroad to advance western medicine. American physicians travelled to Guatemala to test penicillin’s effectiveness. They did this by infecting local men, women, and children with sexually transmitted diseases such as syphilis and gonorrhoea. Puerto Rico was also used as a laboratory by US medics. Respected cancer researcher Cornelius Rhoads transplanted cancerous cells into the bodies of Puerto Rican patients in the name of research. Regarding his work in Puerto Rico, Rhoads said:

What the island needs is not public health work but a tidal wave or something to totally exterminate the population. It might then be livable. I have done my best to further the process of extermination by killing off 8 and transplanting cancer into several more. The latter has not resulted in any fatalities so far… The matter of consideration for the patients’ welfare plays no role here — in fact all physicians take delight in the abuse and torture of the unfortunate subjects.

In a similar eugenicist vein, attempting to curtail reproduction among “undesirable” groups, American scientists tested the first contraceptive pill on Puerto Rican women without their knowledge. For more examples of medical imperialism, we could look to US microbiological studies in Haiti; medical killings across the African continent; French doctors wanting to test coronavirus vaccines in Africa. The list goes on.

Racial bias in pain assessment and medical treatment, based on false notions of racial difference, endures today. The under-representation of people from Black and ethnic minority backgrounds in medical research, gaps in training on how to meet the health needs of non-white patients, disproportionate maternal mortality rates, and racial disparities in coronavirus deaths are all products of this history.

So we shouldn’t be so quick to dismiss Black and Brown anti-vaxxers. Because their distrust sits within a long, dark history of racist oppression and abuses of power. Though celebrities and community leaders are stepping up to dispel myths about the vaccine, it is the government’s responsibility to address and rectify the longstanding issue of mistrust and systematic racism in medicine and healthcare.