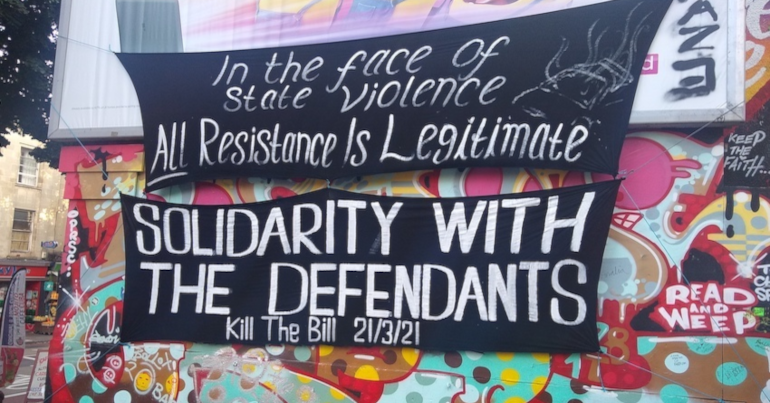 In the last few weeks, three more Bristolians have been handed long prison sentences. After clashes with the police at a Kill the Bill demonstration on 21 March, a total of eight people have been sentenced to prison so far. A further two people are currently on remand in prison. In total the police have arrested 80 people, with the trials of those accused scheduled to last until July 2022. Most are charged with riot, which carries a maximum ten year prison sentence.

It’s our responsibility to stand with those who fought back against the police. We need practical solidarity with those who are in prison and going through the court process. But, we also need to turn the narrative about the events of 21 March on its head.

What happened on the 21 March?

On 21 March 2021, thousands of people marched through Bristol in a huge show of force against the authoritarian Police, Crime and Sentencing Bill.

As the evening drew in, the crowd ended up at Bristol’s Bridewell Police station. Several writers from The Canary were there to witness what happened as Avon & Somerset Police began to use extreme violence against the crowd of young protesters. People were angry about the government’s planned restrictions on protest, increases to sentencing powers, and criminalisation of Gypsy, Roma and Traveller (GRT) communities. Riot police attacked people with batons and pepper spray; slammed riot shields down on protesters’ heads; charged people with horses; and attacked protestors with dogs.

The crowd defended themselves, and by the end of the evening the windows of the police station were smashed and several police vehicles were on fire.

Were the police taking revenge for the toppling of the slave trader statue?

Why did Avon & Somerset Police respond to the protest on 21 March with such extreme violence? Well, first of all, violence against protesters is nothing new. You’ve only to look at the use of violence against people resisting the DSEI arms fair this month to see that police violence is routine – not something out of the ordinary. However, some exceptional circumstances may have influenced the police’s decision to use violence on 21 March.

First of all, the 21 March demonstration was part of the Kill the Bill movement. This movement directly challenges the new powers the Tory government is planning to give to the police. The demonstration had marched to the local police station. Protesters were chanting anti-police slogans, protesting not just against the Bill but against police violence as a whole. It’s reasonable to say that the police are likely to have responded with more violence, because the protest was directed against them.

Secondly, the demonstration came during the tail end of the UK’s harshest coronavirus lockdown. The government’s lockdown measures did not contain any specific exemptions for protest, and Avon and Somerset Police had – earlier that day – been threatening protesters with arrest for simply being out on the streets. However, many have argued that the lockdown protest ban breached human rights law, and last week a Kill the Bill protester was acquitted of an offence under the Coronavirus Act. But on 21 March, Avon & Somerset Police were acting as if everyone at the protest was committing a crime just by being there. It’s fair to assume that this assumption may have empowered officers to use violence more readily.

Thirdly, March’s Kill the Bill protest was the largest in Bristol since the massive Black Lives Matter demonstration of June 2020. During that demonstration, a statue of local slave-trader Edward Colston was pulled down and thrown in the River Avon. On that occasion, the police stood by and didn’t confront the crowd. Avon & Somerset police defended their decision to stand back, saying that intervening could have sparked a riot. However, the Force was publicly lambasted for its ‘inaction’ by Priti Patel, who reportedly had a “firm discussion” with local Police Constable Andy Marsh over the police response to the incident. Marsh stepped down from his post the following year, just after the 21 March Kill the Bill protest.

Which leads us to…

So it’s hardly surprising – amidst pressure from the home secretary – that Avon & Somerset Police opted to use violence against the Kill the Bill demonstrators at the next large mass protest to take place in Bristol since the toppling of Colston.

And it’s important to remember that racialised and classed violence by Avon & Somerset police is constant. If you’re Black in Bristol, you are seven times more likely to be stopped and searched. Commenting on the police response to the Kill the Bill movement, 67 year old Black Bristolian Judah Adunbi told Novara Media that – looking back on policing in Bristol from 1980 until 2021 – “he saw more continuity than change: he’s still up against the same “racist police””.

So far, eight defendants have plead guilty to charges relating to the 21 March, the majority of them to riot.

Having first been subjected to police violence, the crackdown on the Kill the Bill demonstrators has continued in the courts. I have attended most of the hearings so far, and I can say that judge Patrick – who has presided over all the Crown Court hearings – has treated the cases in a highly sensational and politicised pro-police manner. Patrick has handed out custodial sentences, even when he clearly didn’t have to, and has shown empathy with the police officers – who he claims were “dehumanised” by protesters –  while paying no heed at all to representations by the defendants about police violence.

On 30 July, the first five defendants – who had all plead guilty – were sentenced to over 14 years between them. Bristol Anarchist Black Cross and Bristol Defendant Solidarity (BDS) said at the time:

We are writing this statement to make clear that we support those who have been sentenced today, and that we are proud of them for fighting back. We need to be ready to defend ourselves against the police, and stand with those facing repression and criminalisation.

In recent weeks Patrick has sentenced Dylan Dunne to four months in prison for theft of a police officer’s cap. A probation officer advised the court that Dylan could be given a non-custodial sentence, but Patrick chose to ignore it.

On the same day, Shaun Davies was sentenced to three years six months in prison for riot. BDS tweeted:

Another demonstrator, Shaun Davies, was imprisoned for 3 years and 6 months for riot. We are proud of him and all others bravely resisting police violence and attacks and protecting themselves and others. Please share and support the #BristolABC fundraiser!

Most recently, Ben Rankin was sentenced to a massive five years for riot.

Today, Judge Patrick sentenced another defendant for a 5 years. Again the judge used the sentencing to read out a long list of police ‘testimonies’, with not one mention of police violence against our defendants.

You might think that all those who plead guilty were – in fact – guilty.  But that’s not the whole story. When faced with a serious charge like riot, there’s a heavy pressure on people to plead guilty, because those who do are automatically offered a reduction in sentence

Those wanting to argue their innocence are making a serious gamble. They have to stake years of their lives on the promise that a jury will reach the right verdict. In riot cases one of the key legal defences is that you were acting to defend yourself or somebody else, which is highly subjective. So it’s easy to understand how – faced with a heavy charge like riot – someone might plead guilty – even if they have a good legal defence – to avoid a long sentence.

I hasten to add that – in my view – we shouldn’t just be standing in solidarity with those defendants who have a legal defence that would stand up in a court of law. (I.e. that if they used any violence they were defending themselves – or someone else – against immediate acts of police violence). What happened on 21 March was not just about the police’s violence that evening; it was an outpouring of anger at the countless continual acts of violence carried out by police against our communities.

If we are going to move beyond the violence of the state, we need a wider definition and a clearer understanding of community self defence. Regardless of whether those accused have a defence that fits within the constraints of the legal system – a system which clearly serves the interests of those with the most power – they are our allies in the wider struggle against police violence and state power. If we won’t stand back to back with them, then who will?

BDS and Bristol Anarchist Black Cross are helping support the defendants in court and in prison, and have raised almost £50k to support those facing repression. One poignant tweet explains why their work is so necessary:

We stand with our defendants against a system that shows no care for our rights, for our histories, for us. 🖤

Kat Hobbs of the Network for Police Monitoring told The Canary:

The courts have shown that there will be no leniency for defendants, and these punitive sentences are way above anything we have seen for a demonstration in this country for many years. Avon and Somerset police have faced scorching criticism for their handling of the Kill the Bill demonstrations, with a parliamentary report accusing them of “revenge policing” and suggesting that the police use of force may amount to a criminal offence.

The report referred to was made by an All Party Parliamentary Committee in July. Hobbs continued, by arguing that the police are attempting to “save face”:

by trying to paint the defendants as violent criminals at trial, and throwing the book at them. This isn’t the first time Bristolians have been made an example of – after the tearing down of the Colston statue, for which 4 people are standing trial later this year, the government was so angry that the new Police, Crime, Sentencing and Courts Bill includes a specific measure to increase the penalty for damaging statues.

We need to change the narrative

Right now, the narrative about 21 March belongs to the likes of judge Patrick and Avon & Somerset Police. And why wouldn’t it when they have all of the power of the state in their hands? But, we have power too. We have the power and the responsibility to stand up for those who fought back against the police. And, we have to tell the real story of what happened outside Bridewell. The defendants need all of our support as their trials go on, and those in prison deserve our support too.

We have seen again and again that we can’t trust the mainstream media to stand up to power and tell the real story; we need to do it for ourselves.