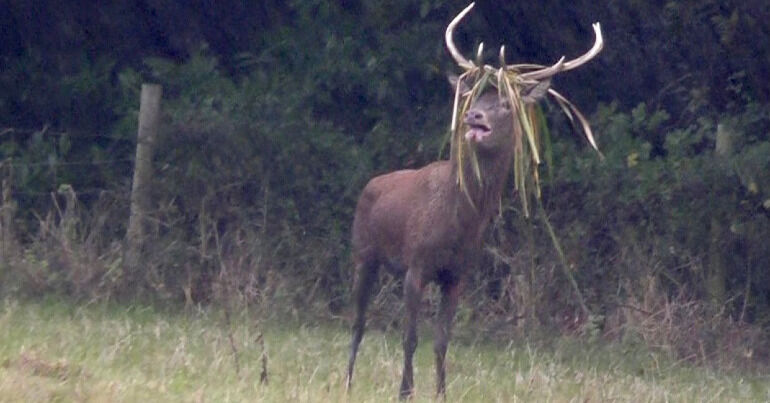 “The cruelty is clear; the animal is heaving and gasping for breath,” Bobbie Armstrong tells me. She’s showing me footage of an exhausted stag, literally running for his life.

Armstrong is an animal rights activist and a volunteer for Somerset Wildlife Crime. The group goes out on to the hills documenting the horrific hunting incidents that take place in the region. I have interviewed Armstrong a number of times about the UK’s most horrific blood sport: stag hunting.

Stag hunting is an illegal sport that continues to take place despite people like Armstrong exposing those who engage in the cruel practice. It involves an hours-long chase with hunters using quad bikes, motorbikes, and hounds. The ‘sport’ takes place on Somerset’s Quantock Hills and in other locations in the South-West.

The Quantocks are owned by various landowners including the National Trust and the Forestry Commission.

The footage is distressing to watch, and of course the hunt is against the law. Armstrong tells me:

This stag was hunted by the Quantock Stag Hounds relentlessly. As he had clattered through fields, pursued by hounds and riders, he had become entangled in the crop. Anyone can see that this is an animal who is exhausted, who has run beyond his limits, and is still being forced to run on.

The hunting ban means that no animal should ever be pursued. It can only be ‘flushed’ out and shot to protect crops, or to relieve it of suffering. It can also be killed in the name of ‘research’.

This is not ‘flushing to guns’. This is not relieving suffering by dispatching a casualty. This is not research and observation. This is ongoing blatant illegal hunting. No animal may be pursued by hounds. Period. There is no exemption in the act which permits it.

Failure of the police and landowners

It is perhaps unsurprising that despite its illegality, nothing has been done by the police or the land owners to stop stag hunting. After all, the Hunting Act came into force in 2005, but hunters have continued to murder foxes and deer regardless. Armstrong explains:

It’s happening because of the failure of Avon and Somerset Police to tackle the issue. It’s happening because the National Trust and the Forestry Commission are still turning a blind eye to it. It happens because Natural England are full of empty promises about enforcing the rules regarding vehicles on this Site of Special Scientific Interest, which in itself is a criminal offence.

For four years we have been raising awareness and highlighting the plight of the deer on the Quantocks. There is NO question that they are hunting them, but until the stakeholders on the Quantock Hills actually take steps to enforce the law, protect the deer and take guns off the hills, this will go on.

This latest incident of illegal stag hunting took place just a few weeks before the National Trust finally announced that it would ban trail hunting on its land. Trail hunting is when packs lay an artificial trail for hounds to follow – supposedly instead of chasing a real animal. Since 2005, hunters have used trail hunting as a guise to go about real hunting of both foxes and stags. Footage of foxes and deer being murdered had been presented to the National Trust over the years prior to the ban, but the Trust only acted when a top hunter was convicted in court for encouraging others to use trail hunting as a cover for real hunting.

The National Trust had to accept that the lies of so-called trail hunting had been exposed, and along with it their own plausible deniability.

They knew what was really going on, all the while thinly veiled by these claims of trail hunting was barbaric illegal hunting.

Armstrong is rightly very concerned that one day a member of the public will get injured. She says:

Two years ago we put Avon and Somerset police and the National Trust and Forestry Commission all on notices regarding the safety issues on the Quantock Hills. Since then, none of them have taken any proactive steps to address what the whole country knows is a smokescreen, but in the case of stag hunting, one that has potentially fatal consequences.

How many walkers, bird watchers, school excursions or cyclists know that they’re walking on a live firing range up there? They don’t! They have no idea. But the police know, the National Trust know… They are playing a game of Russian roulette with the safety of ordinary folk.

The Canary contacted the National Trust for comment about the latest footage of the stag being hunted, but so far has received no response.

While we should be celebrating the news that the National Trust has finally taken steps to ban trail hunting on its land, time will tell whether it actually enforces it. Thankfully we have groups on the ground, such as Somerset Wildlife Crime and local hunt saboteurs, who will continue to expose illegal hunting. It’s through these activists that both the hunting packs and landowners will be held to account.