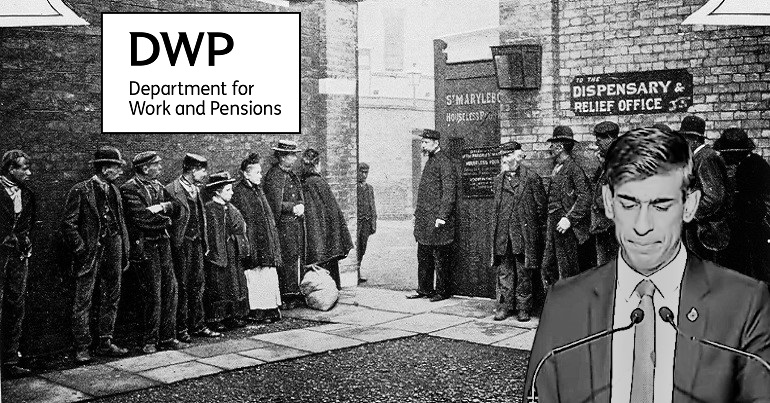 Rishi Sunak’s Spring Statement just confirmed that most people claiming social security from the Department for Work and Pensions (DWP) are, in his eyes, worthless. Because the chancellor has done nothing for millions of people on so-called benefits. In fact, Sunak has further consigned them to the ‘digital workhouse’: entrenching poverty and misery under the DWP system.

A Spring Statement for the rich

The Spring Statement contained no new measures on social security. The one mention of it was to say what the government did in 2021. Sunak failed to address the fact that around 10 million households are facing at least a £290 real terms cut to their social security. This is on top of things like the benefit cap which has caused persistent child poverty.

Sunak has also done nothing about energy prices for poor people – unless you can afford to install solar panels or heat pumps. So, most households will see a £1,300 increase in their energy bills by October 2022. The Spring Statement did take 5p a litre off fuel duty. But again, that means nothing for the poorest households – 35% of whom have cars versus 93% of the richest ones.

A big announcement of bullshit

Sunak’s main announcement was an increase in the threshold at which people start paying National Insurance. It’s now the same as income tax – so £12,570, an increase of £3k. Overall, this is supposed to mean an average £330 extra in people’s pockets. But again, this is nonsense for the poorest people – among them chronically ill and disabled people who can’t work; unpaid carers; those on Jobseeker’s Allowance, and part-time workers who didn’t meet the National Insurance threshold in the first place.

Moreover, it means little for those who do pay National Insurance but also have to claim Universal Credit. This is because the 55% Universal Credit taper rate at which the DWP cuts your social security payment will swallow much of the £330 back-up anyway.

All Sunak’s Spring Statement has done is to continue an ideological drive by the Conservatives. As I previously warned in 2018, the Tories designed Universal Credit with a Victorian mindset of the ‘deserving’ and ‘undeserving’ poor:

Sick, disabled, unemployed and low earning people would no longer be different, distinct benefit groups. They would become one, homogeneous ‘underclass’ of people. And… the state would give minimal support to these people. Instead, charities and communities should carry the burden of this workless/underemployed group.

In May 2019, UN rapporteur Philip Alston called Universal Credit a ‘digital workhouse‘. Sunak’s Spring Statement has now cemented that vision. He’s done nothing to support the poorest people amid the worst cost of living crisis in decades. Instead, Sunak has locked millions of low-paid workers, social security claimants, and chronically ill and disabled people into this digital workhouse. Their incomes will continue to fall behind everyone else’s – trapping them in poverty and misery. And sadly, there seems no way out of the digital workhouse on the horizon.