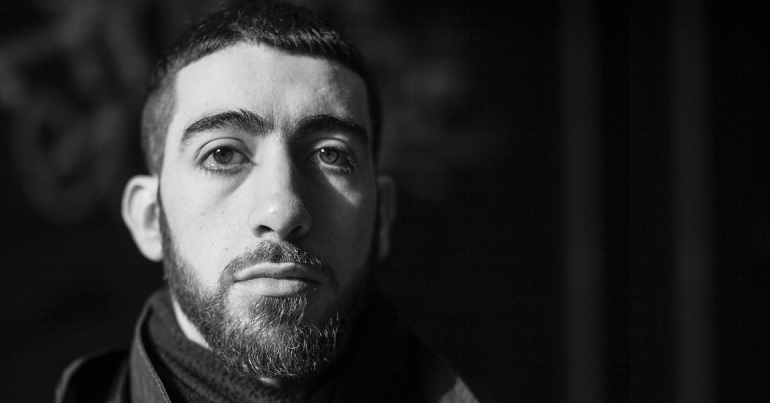 A new book, of spoken word pieces by a conscious rapper and poet, explores the chaos and harrowing nature of living in what he calls “Grenfell Britain”.

Potent Whisper (aka Georgie Stephanou) comes from a single-parent, working-class family on a council estate in South West London. And it’s those politics and social issues that shape Whisper’s music. Since 2015, Whisper has come into his own. From the grime-heavy, anti-gentrification anthem Brixton First featuring Lara Lee, to his collection of spoken word Rhyming Guides To…, his artistry and ability to twist politics with music and words is fast gaining him a reputation.

Now, Whisper has put nine of his spoken word pieces into a book. The Rhyming Guide to Grenfell Britain is released on 23 April, after Whisper plays to a sold-out launch on Friday 20 April. So The Canary caught up with the rapper and poet, to discuss the notion of “Grenfell Britain”.

The Rhyming Guide to Grenfell Britain features spoken word pieces that cover a range of topics, from NHS privatisation to council estate ‘regeneration’. Although music is his preferred artistic medium, he said spoken word is “a more effective vehicle for getting my point across”. He told The Canary:

I can reach people with spoken word in ways I can’t through music. It can dismantle and offer radical solutions to key sociopolitical issues which are typically either misrepresented by the media or abstracted beyond comprehension by elitist language that most of us were never taught. I wanted to make important information accessible by translating it through rhyme and delivering it in a way that people want to engage with. I was honoured to have the good people at Dog Section Press take an interest in the work, resulting in my first printed collection and a wider audience for the pieces contained within: ‘The Rhyming Guide to Grenfell Britain’.

“You’ll be redeveloped next”

One of Whisper’s standout spoken word pieces is Estate of War, featured in the book. He deals with the issue of councils “regenerating” housing estates, such as Cressingham Gardens and Central Hill. But he succinctly, often wryly, explains that all is not what it seems with “regeneration”. Originally released as a video, Whisper told The Canary:

The video was produced by Jaya Klara Brekke and Ross Domoney, creators of the award winning film ‘Uprooted’, a thirty-minute documentary following residents in their final days before estate demolition. Two very talented filmmakers, who have really given my words a new life with this visual.

My writing process is pretty straightforward, but the process begins long before the actual writing begins. Almost all of my spoken word material is purpose built, so the process usually begins when I learn of an issue or injustice and decide that I would like to address it. Once I have decided what I would like to write about, I do considerable research on the topic, enabling me to write a fully informed piece.

Estate of War is also indicative of why Whisper writes and performs spoken word. Because every piece in The Rhyming Guide to Grenfell Britain was created to support a specific campaign: 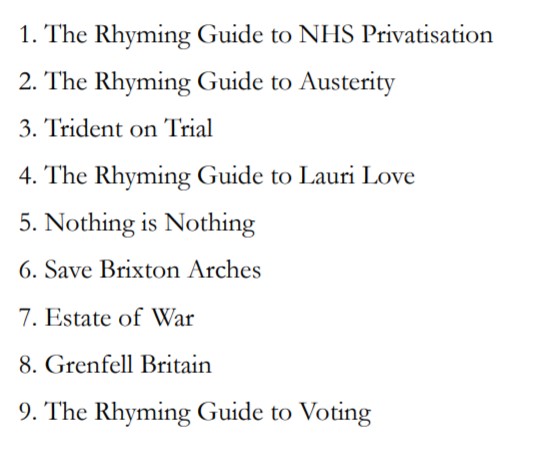 It is perhaps piece eight, Grenfell Britain, which is the most important piece in the book. Because, to Whisper, this sums up the current regime we live under. In it, Whisper rhymes:

What happened at Grenfell, that was an act of war

The murder of innocent people who died because they’re poor

So if you think that you survived it, I wouldn’t be so sure.

This sums up the overriding theme of The Rhyming Guide to Grenfell Britain: the rise of a political society which puts the interests of its own class and corporations before the public. Whisper told The Canary:

The deaths at Grenfell were forewarned, preventable and therefore deliberate. That these deaths were chosen makes Grenfell an emblematic embodiment of almost all that is wrong with Britain, particularly in relation to its delivery of the austerity agenda. Austerity is a choice. The suffering of millions of people in this country is a choice. These decisions are not final, they can be reversed in parliament or rejected by the people. I still believe the average person cares about the world and my approach to change is not in appealing to parliament but making people feel as powerful as they truly are.

Even if I didn’t love art and held no passion for it, I would still dedicate my time to it. Why? Because if we want to make change, art is perhaps the most effective weapon we have available to us. Its attributes are unmatched. It’s free to obtain, legal and has the ability to secure victory without bloodshed. It can be used on any terrain, in multi-dimensions: on the streets, online, in people’s minds. It’s vast, but personal. It can inhabit every space, at once. In attack or in defence, art is both the weapon and the inspiration to fight.

A language we should all learn

The Rhyming Guide to Grenfell Britain is a masterclass in art for political and social change. Whisper delivers a raw and philosophical tour de force, covering many aspects of modern day life in Britain. Inspiring critical thinking, questioning, a call to action and a stark message for the political class, The Rhyming Guide to Grenfell Britain is accessible, triumphant and powerful. It’s a ‘must-have’ for anyone with political inclinations. Whisper summed up his work by saying:

Imagine there was a lion that you could not see, about to attack you. Imagine that a friend shouts to warn you, but speaks in a language foreign to you. You don’t understand their warning and you get eaten. Academics are that well-meaning friend. Consider me your translator.

Whisper interprets a language that we all need to become fluent in.

– You can pre-order a copy of The Rhyming Guide to Grenfell Britain here.