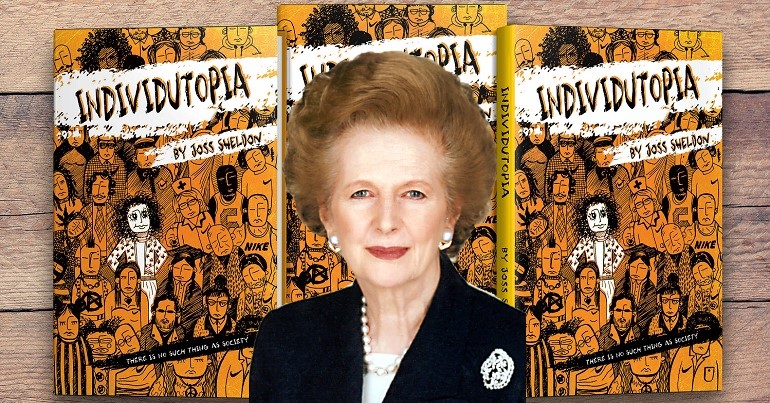 A radical novelist’s latest work has taken Margaret Thatcher’s legacy and used it to create a hyper-dystopian vision of society; an “individutopia”, where the neoliberal dream has become a terrifying nightmare.

Joss Sheldon is an author from Barnet. Already an established writer, he’s won critical acclaim for his groundbreaking, Orwellian books The Little Voice and Money Power Love. Now, he’s back with Individutopia – a dystopian novel set in a world where everything has been privatised and the idea of society no longer exists. Out on 23 August, you can pre-order it here.

It is, in some ways, a departure from Sheldon’s previous work. But all the hallmarks of this author’s compelling writing are still there. So, The Canary caught up with Sheldon to talk Thatcher, the future, and a girl called Renee.

Individutopia is set in the year 2084 and follows the life of Renee. The premise appears to be a simple one: Thatcher’s neoliberal dream has come into full fruition. Everything from the air people breath, to the steps they walk, have been privatised or become a saleable commodity. Big name companies own everything; government has gone; humans are crammed into London, and everyone lives in pods that are two metres long, one metre wide, and one metre high.

Sheldon told The Canary that he was inspired by two other authors’ seminal works:

‘Individutopia’ was inspired by ‘1984’ and ‘Brave New World’; two fantastic books which have stood the test of time, which I loved as a youngster and still love today…

Large elements of ‘1984’ have come to pass; we do have CCTV cameras, perpetual war and political newspeak. But governments haven’t become anywhere as near as omnipotent as in Orwell’s novel…

While the now-standard sci-fi dystopian world appears run-of-the-mill in Individutopia, Sheldon’s creation is actually anything but. Because it’s not the dystopia which is the primary focus. It’s how one sentence from Thatcher got the book’s version of London in 2084 to that point, and what it means for us, in the real-world of 2018.

In an interview with Women’s Own magazine in 1987, Thatcher infamously said:

there’s no such thing as society. There are individual men and women and there are families. And no government can do anything except through people, and people must look after themselves first.

It’s the first six words from Thatcher’s quote that are the basis for the book’s premise. In Individutopia, human society no longer exists. Competitiveness has become the overriding human mantra. Self-importance means everyone has become addicted to cosmetic surgery and social media. Humans wear electronic contact lenses which block out the sight of other people and the real world. And no one has friends or family; people have avatars which tell them exactly what the want to hear. As the narrator in Individutopia notes:

Thatcher’s dream had become a reality. There really was no such thing as society.

The last human-to-human conversation took place between our hero’s two parents, just moments before she was conceived. That act of copulation was the last time two adults came into physical contact.

The rise of the “Bullshit Job”

The book follows Renee as she goes through her average day: waking up to compliments from her avatars; checking her debt (which increases just because she breathes); seeing where she’s “ranked” (there are league tables for snoring, sleeping and even saliva control); looking for and doing work. But a job is not what we’d consider it. Because Renee does tasks like:

The jobs hint at what could really be going on in Individutopia. That is, that robots do everything and humans have no purpose. So, those in charge make people do mindless chores to keep them from revolting.

It may seem far-fetched. But Sheldon’s fleshed out world, along with actual facts, make it perfectly plausible. For a current reference, note David Graeber’s Bullshit Jobs. Sheldon believes we’re already on a path which could lead to a version of his 2084 world. He says of humanity’s current situation:

Yet even though we follow this same path, we do it in our own individual way. We study different things, work different jobs, have different wages, live in different sized houses and wear different clothes. We forget that we’re social animals, and plough ahead on our own.

Of course, our individuality must conform! We can have the most individual job in the world, but we have to have a job. We can’t go and live on a commune, or take some land and live a self-sufficient life. God forbid you choose to claim welfare! You can wear any clothes you like, funding any one of hundreds of brands. But you can’t walk around naked. You have to buy, buy, buy! And you have to exert your individuality through the market.

Sheldon’s gloriously colourful writing makes leaping from our world to Individutopia‘s wholly believable. The companies that rule include Nestle, Amazon, and Nike. Twitter is the catch-all social media platform. And London still has all its iconic landmarks; albeit not quite as we know them today.

Throughout the book, you get the feeling that something isn’t quite right. It’s this unease which leads Renee from an average day to a huge realisation; one that sets Individutopia on course for several shocking revelations.

From it’s opening, to it’s shocking conclusion and surprise denouement, Individutopia hits the reader with questions about society and the path we are hurtling down. Because the history in the book is our reality, it serves, as Sheldon writes, as a “warning”, not a “prophecy”. He told The Canary:

This dark dystopian future is based on the world we’re living in today. More and more assets are being privatised, inequality is increasing, and mental illness is spreading across the land. That’s why it’s believable.

As with Sheldon’s previous work, the use of the third person dominates, with the narrator speaking directly to the reader. This makes Individutopia enthralling and, somewhat ironically, individualised – like the book is speaking to you, and you alone. It’s also a very accessible work. Chapters are short, the writing not overly embellished, and the paragraph structure makes it easy to follow. Also, the constant inclusion of Renee’s thoughts and musings mean the story flows at a rapid pace. As with Sheldon’s previous work Money Power Love, Individutopia could easily transfer to the screen.

Renee is suitably heroic and likeable; again, adding to the realism. Her almost child-like demeanour adds to the feeling of despair and fright for her and humanity’s situation. But it’s the messages and warnings in the book which truly dominate.

Sheldon’s optimistic that we can avert ending up in Individutopia:

History tells us that when a political structure become too extreme, it tends to be replaced. We’ve seen this with feudalism and Soviet-style communism, and I expect we’ll see it with neoliberalism too. We’re already seeing the rise of the left in countries like the UK, Portugal and Greece. We’re seeing new media, such as The Canary, and the anti-austerity movement. The voices are getting louder.

But it will take time. With neoliberalism, the coercion is subtle… It brainwashes people into believing they’re free… We genuinely believe we’re in full control our lives, even when we’re dependent on corporations to survive. I think it’ll take time before people start to wake up to these really rather subtle forces. But I’d like to think we’ll get there in the end.

It’s hard to praise Individutopia without giving the book’s numerous sucker-punches away; the rollercoaster ride it creates is stomach churning. Suffice to say, Sheldon has once again created a fictional masterpiece grounded in an unnerving reality. Engaging, thought-provoking, and morally arousing, Individutopia serves as a stark warning about where we’ll end up if we don’t change.

I loved ‘1984’ and ‘Brave New World’, but those books missed this trend. So I wanted to create book in the same genre of those great novels. But I wanted to make it relevant for the neoliberal era. I hope ‘Individutopia’ does that: creating a world in which we’ve all become our own Big Brother; imprisoning ourselves, trying so hard to be individuals that we forget our need for society.

Our world has become homogenised, dominated by states and markets, most of which are neoliberal. Most places you go you’ll see people in debt; people forced to work jobs they don’t like… I think the world would be a better place if there were alternative systems for people to choose from.

I hope people might think about such things after reading ‘Individutopia’. But, more importantly, I hope they enjoy the story for what it is: entertaining and uplifting. A story of hope, of the potential we all possess to rebel, break free and be social.

Individutopia does all this and more; making it one of the most important books of 2018. And maybe, just maybe, people in 2084 will read it, and wonder what Sheldon was so worried about.

– Pre-order Individutopia, which is out on 23 August.