A new, off-the-wall book puts the education system starkly under the spotlight | The Canary 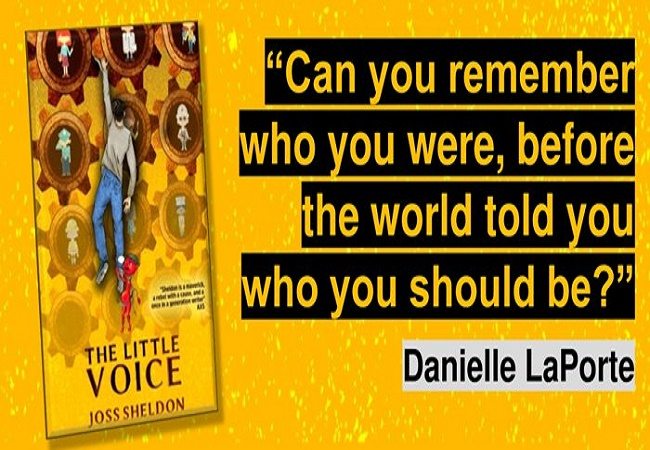 A radical author has something to say in his latest novel on the state of the education system. Joss Sheldon’s third book, The Little Voice, paints a dark picture of just what controlled schooling may do to us all. And Sheldon doesn’t pull any punches with his appraisal of what he calls “indoctrination”.

A work of fiction?

Sheldon, 34, from Barnet, released The Little Voice on Wednesday 23 November. It follows the protagonist, Yew Shodkin, as he recounts his life. The reader is taken on a journey in the book through Shodkin’s early years up to the present day. He recalls the effect that schooling and discipline had on him from a young age, and how it shaped his future. But all the while there’s a “little voice” talking to Shodkin, inside his head. And this little voice belongs to a character named “Egot”.

The Canary spoke to Sheldon exclusively about The Little Voice. He said that, while not autobiographical, there are some striking similarities between himself and the main character:

The book is still a work of fiction, it’s not an autobiography, but I looked in on myself for it and a lot of things in it did happen to me. I did get into trouble at school (I got expelled twice). My parents did always side with my teachers. Together, they did encourage me to behave, and punish me whenever I misbehaved.

Sheldon says that a lot of the anecdotes in The Little Voice are based on events from his own life. But moreover, it’s the theme of conditioning to conform from such a young age that is true to his own experiences. “The narrator, like myself, is an adult”, Sheldon says. “He’s able to look back on his childhood. To understand what happened to him. To analyse it. And to understand why he acted the way he did”.

Rallying against the education system

Throughout the book, the development of Shodkin’s character is highly pronounced. The reader sees him change from an inquisitive, somewhat mischievous yet spirited child into a regressive individual who accepts he must just conform. But as events unfold, Shodkin’s attitude changes once again, and he seems to rediscover the Egot, who inspired him to rebel as a child. The Egot makes Shodkin do things like destroy his classroom; look up girls’ skirts and urinate in a plant pot.

The character of the Egot is almost like a devil on Shodkin’s shoulder, acting as a counterbalance to what the rest of the world is telling him to do. But the Egot appears to be more of a metaphor for a person’s individuality than an actual voice in Shodkin’s head. The “little voice” is strongest throughout his childhood years; and there’s a reason for this. Sheldon believes that the educational system “crushes” a person’s individuality; if grading the education system, he would give it a “D-plus. Could do better”:

The system makes us sit behind a desk, inside, for hour after hour, day after day. The system makes us adapt our personalities to that one, artificial classroom environment. We’re all made to wear the same uniform, same style of shoes, same shirt and tie. There’s no room for self-expression. Then we’re told not to speak unless spoken to. If we express ourselves, we’re accused of “answering back”. If we do anything our teachers don’t like, we’re punished. The system doesn’t bend to our personality, we’re made to bend our personality to the system. And if we don’t, we’re punished, ostracised, or dosed with medication.

Sheldon uses constant references to Taoism and behavioural and social psychology throughout the book, and both work to startling effect. The interjections of psychology are particularly pertinent. Sheldon’s almost clinical narrative when juxtaposing Yew’s situations with academic psychological theory is, at first glance, somewhat ironic, given the anti-mass education mantra of the book. But the comparisons work well, and give the reader a linchpin to be able to fully understand the points the author is making. Sheldon says that, while he personally studied economics at university, psychology underpins his outlook on society:

Sheldon cites Dan Ariely, a behavioural economist. Ariely is well known for his work on the relationship between human rationality and corporate and economic policies. He has proven, by conducting numerous experiments, that humans are swayed too heavily by such business practices as advertising and tactical pricing strategies. Sheldon says:

Ariely’s findings have major implications for economics. If we don’t maximise our utility when left to our own devices, if firms with big marketing budgets and clever execs can sway us, then we do need protection from the free markets. We do need some sort of intervention. This alternative approach to economic thinking was exactly what I’d been looking for at university. And, at its heart, was psychology.

The Taoism references in The Little Voice are subtler, yet just as effective. Sheldon uses quotes from the founder of Taoism, Lao Tzu; an ancient Chinese philosopher, referencing them in the first person past tense to add weight to how Yew is feeling at the time. Many of them are contradictory to the character’s assertions, but are used explicitly to point the reader in the direction Sheldon wishes their thinking to go. He says that he accidently found Taoism when looking for a quote for the book. And that he then found another quote from Tzu that fitted well into the narrative; and then another one, and another one – and ended up using a multitude of the philosopher’s work.

The fact Sheldon seemed to stumble upon Taoism hints at his background. He says he was terrible at English at school; possibly mildly dyslexic. So, the actual mechanics of writing came to him late – only really becoming important when Sheldon was studying for his master’s degree. “I did write some poetry whilst I was at primary school”, Sheldon says. “The grammar was probably terrible, but I found it to be a good way of expressing myself. And, I guess, that’s what my books are: expressions of myself”.

A history of radical thinking

Before The Little Voice, Sheldon had written two other novels. His first, Involution and Evolution, is based on the true story of ‘the Frenchmen‘; a group of World War I British conscientious objectors who went up against the British military machine, and were sentenced to death for it.

His second novel, Occupied, is about the lives of people living under occupation. The inspiration for the book was the situations in Palestine, Kurdistan, Tibet. And the corporate occupation of the west. The recurring message is that, deep down, we’re all the same, but we can’t see it. “We’re manipulated, kept from uniting by a process of divide and rule”, Sheldon says. “So, we don’t turn on the real powers that rule over us”.  The book moves from a halcyon past to an everyday present and on to a dystopian future. And things keep on repeating, because history keep on repeating.

Sheldon’s writing is extremely accessible. He is constantly making reference to “the reader”, and while some of the subject matter, especially the philosophical and psychological citations, is heavy, Sheldon weaves them into the book in such a way that they appear in keeping with the narrative.

There is also a lot in the book that many readers will be able to relate to. Whether it be the Shodkin as a child and his experiences at primary school; his time working in a call centre or the eventual spiral into drug abuse and the collapse of his life, Sheldon covers many experiences in his writing. But one section that stands out is about political activism. It comes at a time in Shodkin’s life when he is feeling at his most bereft. And Sheldon uses the hook of becoming involved in protests and direct political action to revisit Shodkin’s childhood feelings of firstly free spirited rebellion, and then forced conformity.

The section weaves from Shodkin’s firstly positive experience of activism, to a somewhat bitter and negatively resigned ending. Sheldon himself has direct experience of this, but says the book isn’t always a direct comparison:

Getting arrested for allegedly ‘assaulting a police officer’ was definitely my own experience! Oops! And, like in the book, the charges against me were dropped. I can assure you I didn’t actually assault anyone!

I think political activism has a long history of making a real difference. The reason we can vote, here in the UK, is because of the activism of people like the Chartists and the Suffragists. Without activism, South Africa would still be an apartheid state and the USA would still be segregated. Activists, for me, are the real heroes of history. I salute them in all three of my books.

But it’s easy to look back on those cases with hindsight. Getting involved in political activism, in the here and now, is a whole different kettle of fish. While your protests may make a difference in the long term, you feel that you’re powerless, ignored and alone, while you’re taking part in them. Two million people protested against the Iraq war. Every one of them was ignored! I’ve been to other protests where less than a hundred people have turned up. That’s pretty disheartening.

That was the point I was trying to make in The Little Voice. Protest is a great way to try and change the world for the better. It may even work in the long term. And, if it does, you’ll be a real hero in my eyes. But it can be pretty frustrating and thankless in the short term. Also, I wouldn’t recommend doing it simply to make yourself feel better about yourself!

Plenty of questions, but few answers

Sheldon’s stance on political activism is reflected in his writing. The Little Voice is radical, to say the least. But Sheldon’s style is warm, almost whimsical at times, and this means that even the most politically uninitiated reader will understand what he’s trying to say.

The Little Voice is a masterclass in how to, firstly, engage a reader, and secondly draw them into the author’s way of thinking. The questions The Little Voice poses aren’t always answered. But what the book does do, is guide you to your own conclusions. Sheldon says that he writes “to be me; to express myself. I write to rebel; to let off steam. I write to escape”.

He also hopes The Little Voice will entertain readers. Sheldon says he hopes readers will “be informed; that they’ll be inspired to think about things in a whole new way”. And thinking about things in a whole new way is a goal The Little Voice achieves with ease. If the book was marked by the education system Sheldon is rebelling against, it would be an “A*. Top notch”. But knowing Sheldon, approval from the system would be the last thing he wants.

– Find out more about Joss Sheldon’s other two novels.