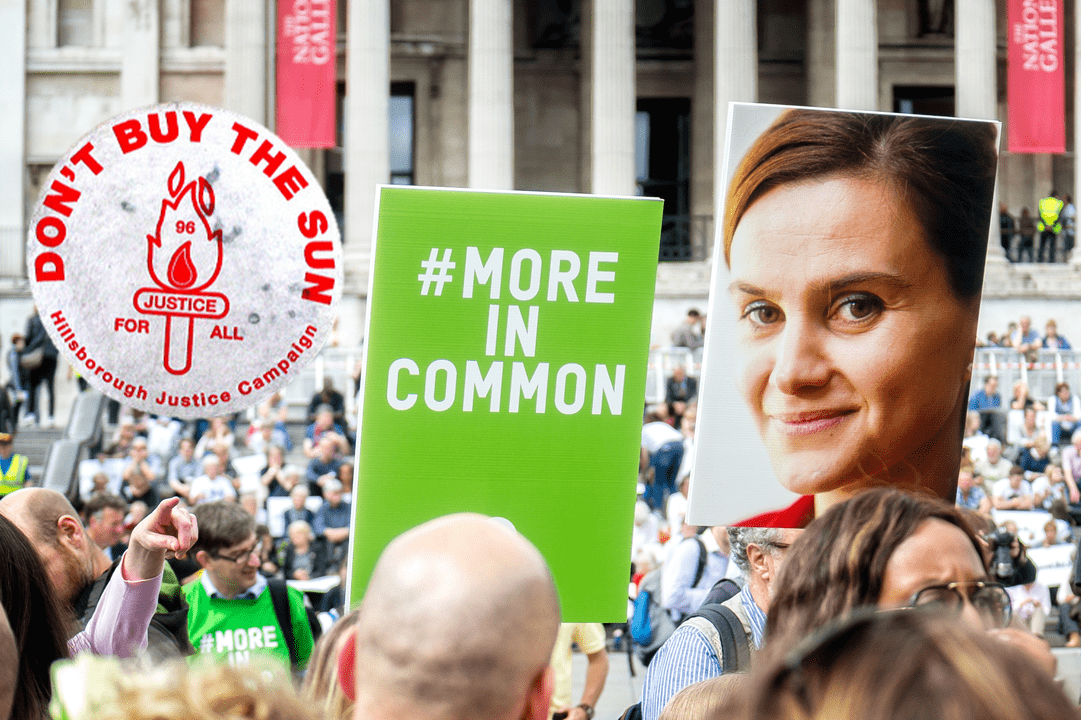 The Sun just shamefully used the murder of Jo Cox to launch a misogynistic and racist story, which seems to excuse in part her murderer Thomas Mair’s actions. And it’s even worse than the article right-wing tabloid The Daily Mail used, blaming immigrants for Mair’s radicalisation.

Blatant racism by The Sun

The Labour MP was repeatedly stabbed and shot by Mair in her constituency town of Birstall on 16 June. But on Thursday 24 November The Sun ran a story with the following headline. The Canary would politely ask its readers not to click on the link to the actual article: 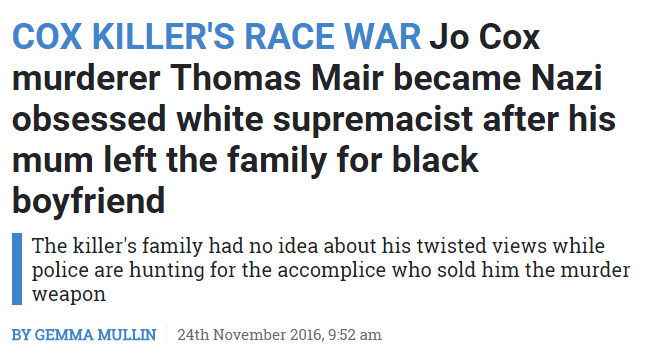 The piece describes how Mair “went to live with his grandparents when his mother Mary married Reginald St Louis – originally from the Caribbean”. But The Sun makes no attempt in the piece to back-up its assertion that Mair became a Nazi because of his mother’s relationship. It goes on to describe how Mair’s “mixed race” (sic) half-brother, Duane, said that the family had no idea of Mair’s far-right views.

Users on Twitter were generally appalled by The Sun:

A recap of who to blame for the murder of Jo Cox according to The Sun and Daily Mail: his mum, her "black boyfriend", immigrants and Jo Cox pic.twitter.com/ZbzonVkF1W

The Sun has no evidence Mair's mum's relationship with a black man radicalised him. Calls it a "race war" anyway https://t.co/yHB90ZVMdq

The Sun there, blaming a woman and a black man for Thomas Mair’s radicalisation.

Uhuh. Yup. That’s definitely what it was 👀

The Sun also continued to use the mental health slur that Mair was a “loner”. But the phrase was even used by the Detective Superintendent in charge of Cox’s case. This is despite the fact that a psychiatrist found that Mair’s mental health issues didn’t contribute to his radicalisation. Nor to the killing of Cox.

It comes after The Daily Mail ran a similarly vile story on Thursday 24 November. As The Canary reported, the paper ran with a headline “Did Neo-Nazi murder Jo over fear he’d lose council house he grew up in?”. The Daily Mail’s article begins:

Thomas Mair may have murdered MP Jo Cox because he feared losing his home of 40 years to an immigrant family.

And while the paper admits that Mair’s “true motive will never be known”, this didn’t stop them speculating.

But to make matters worse, left wing tabloid The Mirror also followed The Sun’s lead. The paper ran the following headline. Again, The Canary asks readers not to click through to the full article:

The paper went on to describe how Mair “became a deranged [another mental health slur] white supremacist”. The Mirror said this was after his mother “abandoned him as a child and married a Caribbean immigrant”. It said he was raised by his grandmother after his mother moved in with her “black boyfriend and their mixed race baby”.

The Mirror did include evidence from the trial. It said that:

In the days before he killed Jo Cox… Mair was in his local library googling “matricide” (the murder of one’s own mother) and “miscegenation” (breeding between people from different racial backgrounds).

But none of this evidence was proof that Mair’s family situation had contributed to his far-right, extremist and terrorist tendencies.

The gutter press, truly in the gutter

So, The Daily Mail blames immigrants; The Sun blames Mair’s mother and her partner, and The Mirror joins in, just for good measure. Oddly, what all three tabloids fail to acknowledge is that Mair had committed a terrorist offence. The killer of Jo Cox was, therefore, a terrorist.

Also, prosecutors said privately that the atmosphere in the UK before the EU referendum was “feverish”. They said it appeared to contribute to Mair’s decision to kill Cox. But this doesn’t seem to matter for the papers which a European report said played into and fuelled the toxic, divisive debate around ethnicity and immigration. As long as they’re shifting copies, mental health, skin colour and women are apparently all fair game.

– Support grassroots action against the rise in fascism.