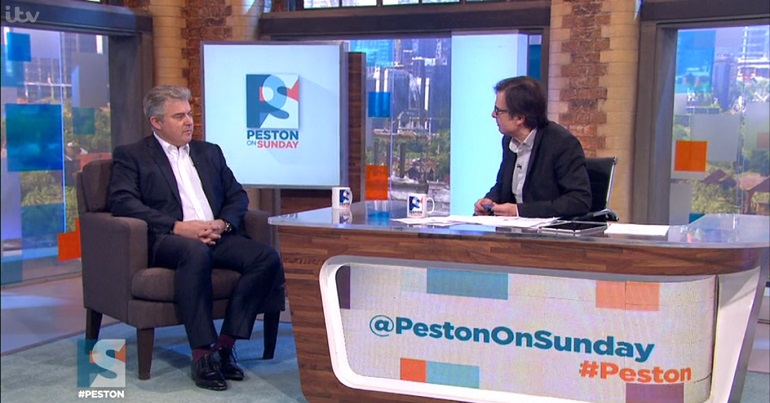 The Conservative Party has been reeling this week over revelations it received £820,000 from Russian oligarchs since Theresa May became prime minister. Reports have named [paywall] one of the donors as Lubov Chernukhin, the wife of a former Putin minister. She donated £160,000 in return for a tennis match with David Cameron and Boris Johnson, and £30,000 for dinner with Defence Secretary Gavin Williamson.

Unsurprisingly, Conservative politicians have been doing the rounds of the TV studios to defend the funding. But Conservative Party chairman Brandon Lewis’ defence on ITV’s Peston on Sunday was just bizarre.

The opening to the interview contained the strangest defence of Russian funding yet. Asked whether Lewis was embarrassed by how much money his party had taken from Russian sources, he responded [38:40]:

Well, we have to raise a lot of money over the year, all parties do. The Labour Party obviously get about 30% of the millions they raise through blocks in the Unions.

Lewis seemed to be suggesting that donations raised from millions of trade union members are comparable to those from a handful of wealthy oligarchs. There was an immediate response on Twitter:

@BrandonLewis comparing dirty Russian money, with trade union donations to the Labour Party. The British working class, as disgraceful as Russian money launderers, according to Brandon. No wonder he's got no members! #Peston

Things started to get a little awkward

Peston then grilled Lewis over the Russian donations, including those with relationships to Vladimir Putin. Lewis’ response was as we would expect:

#Peston asks @BrandonLewis whether the @Conservatives know for certain whether any party donors have close links to Putin. pic.twitter.com/h6XUBCOXAM

But things got a little awkward when Peston quizzed Lewis on the attendance of a known Russian spy at a Conservative Party event:

“We can’t see a record of that person attending that event, but we are looking into it”.@BrandonLewis comments on @GuidoFawkes report of the Russian official that attended an exclusive summer party with top Conservatives #Peston pic.twitter.com/8fg3PxAow7

And social media users were not impressed:

The Russian funding scandal is not likely to go away anytime soon. And it is not surprising that senior Conservatives are desperately trying to shift attention away from it in any way they can.

– Read our coverage of all the breaking news on Russia.