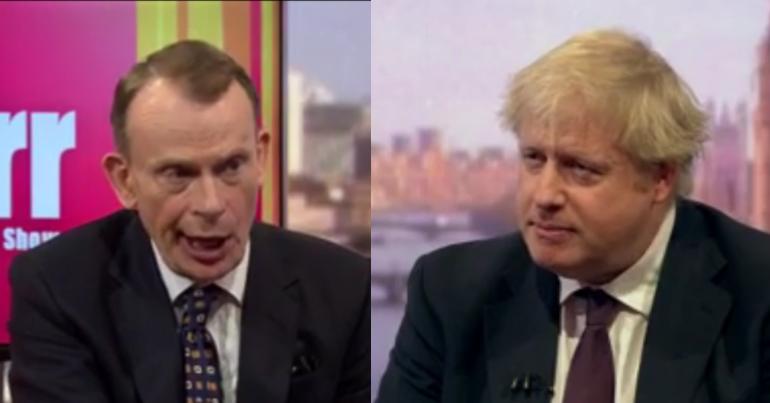 Boris Johnson has come under fire over Russian donations to the Conservatives. Speaking on The Andrew Marr Show on 18 March, the foreign secretary struggled to explain away some rather large donations his party had received. Particularly an eye-watering £160,000 for a game of tennis.

Lubov Chernukhin, the wife of former Russian deputy finance minister Vladimir Chernukhin, paid £160,000 in 2014 for the honour of a tennis match with Johnson and then-PM David Cameron. Cameron rejected calls to give back the money at the time, claiming it was “not the right approach”.

Chernukhin, who is now a British citizen, also recently paid £30,000 to have dinner with defence secretary Gavin Williamson.

Johnson originally tried to dodge the question put forward by Marr. But the BBC host cornered him. Highlighting the awards given to Chernukhin by Putin himself, Marr said:

This lady’s husband was a minister of Vladamir Putin, and was given an award by Vladamir Putin, so he was close to the regime. And you, as a party, were prepared to take £160,000 from her, so she could have a game of tennis with Boris Johnson.

The Foreign Secretary floundered, claiming that dirty money was a matter for the authorities, not him:

If there is evidence of gross corruption in the way that gentleman you mentioned obtained his wealth, then it is, then it is well… it is possible for our law enforcement agencies to deprive him of his wealth… of his unexplained wealth.

Marr ? ? ? absolutely exposes the hypocrisy of Boris Johnson The Defence Secretary Theresa May and the entire Tory Party £160,000 for a game of tennis!! £30,000 for dinner.. Tories in the pockets of Putin Crony Russian Oligarchs FFS!!! pic.twitter.com/QVy2e5C0lX

“Not a great look”

Twitter users were quick to highlight the hypocrisy of the Conservatives’ stance on Russia:

Boris Nohnson took £160k off a Russian individual for a game of tennis. Our Foreign Secretary ladies and gents. wonder what would be said if Corbyn had done that. Boris confirmed the game happened. #marr

£160,000 paid by a Russian oligarch for his wife to play a game of tennis with Boris Johnson.

Now more money paid to have dinner with Gavin Williamson.

What a delightful govt we have.

Good on #marr to question this.

Boris Johnson confirms he did indeed play tennis with Vladimir Chernukhin’s wife, who’d paid £160k to the Tories for the pleasure. Chernukhin was a minister in Putin’s govt. Johnson insists we mustn’t demonise all Russians but not a great look #Marr

Theresa May’s government continues to talk tough on Russia. But it seems the trail of donations that are being uncovered may come back to bite them. Second serve…